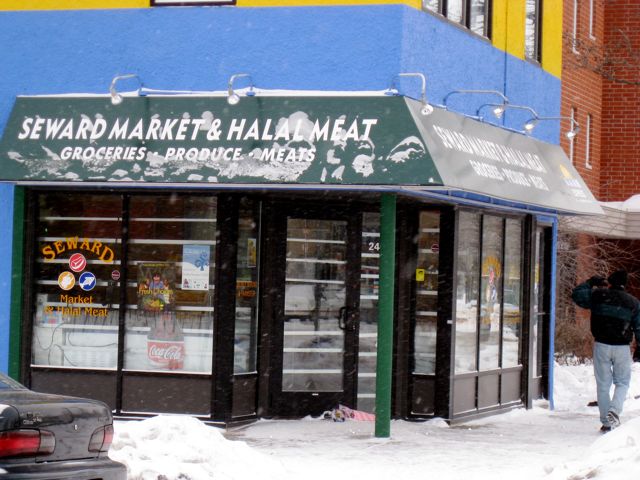 This isn’t a personal blog, of course, but today I’m going to take the liberty of writing my story from last night as it relates to the tragedy. Partly it’s community “news” I think and partly it is helping me in processing the event.

Last night I headed to Seward Co-op about 7:45. Mary was having friends over and I planned to park on Seward Co-op’s public Wi-Fi and have some deli hot bar dinner. I was all bundled up, Sorrel boots bike messenger bag strapped to my back, and a long scarf.

We follow the alleys to the Co-op. I live on 24th Ave. E just south of Franklin. The alley behind our house “T’s” as you approach Franklin Avenue and you must go left or right travelling parallel to Franklin. I went right (west). A few steps and I was behind the Seward Market. I heard a loud “bang.” It sounded like wood breaking but I thought it could be a gunshot. As I got to the street and looked toward Franklin, I saw someone exiting the Market. It didn’t feel right and I avoided the person thinking if that was a gunshot this was the shooter. I circled Bethany Lutheran Church and went through the parking lot to Franklin and walked back to Market. Two men were approaching me. They had heard the shots too. They reached the market before I did, crossed 25th and told me there were bodies in the doorway and store. I called 911 immediately to report a shooting and we walked to the Market entry. 911 dispatch started to ask if there was a robbery and I said “No! There are bodies here. Three bodies. We need an ambulance. ” Police and ambulance arrived shortly. (I’m not sure why I thought I only heard one shot.)

I really appreciate the kind words from so many of you checking to see if I’m OK and I will try to get back to you all personally. I am. Of course, I am still processing what happened and my nearness to the tragedy itself. I am so saddened by this event but still feel that I live in a safe urban area. This is a fluke and “not indicative of our community and will not detract from our vibrant, diverse and welcoming neighborhood” (from the open letter now circulating).

My heart goes out to the families of the victims.

Police have been saying that the 911 call reported a robbery. I think I was the only 911 call and I didn’t report a robbery. I immediately said there was a shooting and there were bodies. Maybe robbery got reported first by 911 dispatch because she just thought it must be a robbery.

From MPR link quoted in sidebar:

A woman at the scene…  said she was buying some things at the market when she saw three men speaking Somali enter the store.

According to local residents who translated, [she] said one of the workers suddenly grew shaky.

He told her he had suspicions about the men and went to talk to them. [She] said she left the store and only later learned about the shooting.

I’ve been wondering about the robbery motive. It just didn’t fit from what I saw when I was at the scene last night. This quote from MPR also makes it sound like something more. Then today, I heard that Minneapolis Police are pretty sure this was not a robbery. (Sorry, not sourcing that one but I trust the source.)

MPR also reported in the story that there had been “signs of trouble at the Seward Market” with “the front door… repeatedly smashed and boarded up over the past few years.” I also noticed recently that they had done some reinforcing of the front windows.