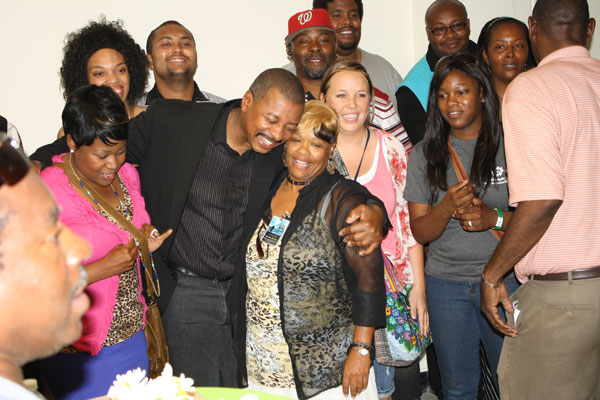 Fans let Robert Townsend know he is appreciated during the reception that followed his film screening at Sabathani. (Photos by James L. Stroud, Jr.)

Although his three-decades résumé as an actor, director and producer is more well known, an overlooked aspect of Robert Townsend’s multitalented career is his love for kids — and grownups too. “He cares about people,” said Wesley Smith of Townsend, who was in the Twin Cities last week for a June 27 Midwestern premiere of his latest film, In the Hive.

During an interview with the MSR June 26, the filmmaker predicted that those who watch his latest work will find it “is going to look, smell and feel like everything they may see on the North Side [of Minneapolis] — all that same craziness that goes on.”

In the Hive stars Loretta Devine, Michael Clarke Duncan and Roger Guenveur Smith and is based on an alternative school for teenagers who had been expelled from their public schools. The film’s school is run by a strong matriarch figure (Devine) who believes that young Black men can be educated and become successful no matter their background.

Townsend added that he wants people to talk about his film and the subjects he explored. “The film is about what is happening around the country. We are losing our kids,” he pointed out.

Smith, who runs the Drop Out to Drop Ins Project, a local program devoted to get dropout students back in school, says the reasons why young people drop out of school vary: teen pregnancy, unstable home life, etc. But he believes the city’s dropout student population needs more attention.

Prior to the June 27 showing at Sabathani Community Center in South Minneapolis,
Townsend told the packed auditorium, “I’m a kid from the west side of Chicago. My father was not there when I was growing up, and my mother raised four kids on her own. We lived on welfare for a number of years, and all I had was a dream.

“I didn’t go to film school… I just figured it out [for himself],” continued Townsend. “I stayed on my knees and worked very hard, and to this day I continue to create.” 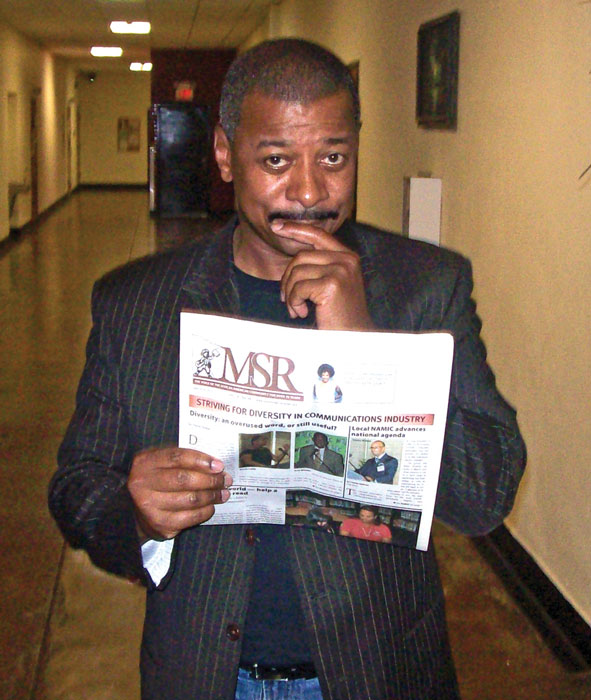 Right: Reading the MSR gives Townsend something to think about.

The audience afterwards gave the film, as well as its producer-director, a thunderous ovation.

“I’ve been talking about it for 30 years,” said local community activist Spike Moss on the film’s subject of better educating Black young men. “We have to address that as a people.”

Townsend told the MSR at a post-screening reception at Sabathani, “I could hear the crowd really get into it at different points of the film. I’ve seen it with different audiences,” including the Congressional Black Caucus and NAACP President Ben Jealous, “and the audience here was so alive. I thought the reactions were incredible. Hopefully it had an effect.”

Townsend said he wants In the Hive to eventually hit the big screen, and he is working on television and DVD release deals as well. The film “may save 100,000 kids who may think about their lives before doing something stupid,” he believes.

“I think it was tremendous for the community to have the opportunity to host the movie here,” said Sabathini Executive Director Clyde Turner. “We have about 400 seats in this auditorium, and to see it full tonight is really a good feeling. It was nice to see the community come together, because this is a very important topic, talking about African American males.”

Townsend also toured North Minneapolis during his Twin Cities visit. “We went into the Family Dollar [store on West Broadway] like it was nobody’s business,” marveled Smith. “The people [there] accepted him just like everyday people. They knew who he was.”

He also found time to talk with residents at Turning Point. “Mr. Townsend has dedicated his life to telling our story,” said Turning Point Chief Operating Officer Liz Reed as she introduced the filmmaker. Rather than give a speech, Townsend chose instead to answer questions from the group and share antidotes for nearly an hour.

He told them that he could have gone the way many of his friends did as a young man, but his mother and his faith gave him another option. “I’ve done all kinds of things through the years,” including once climbing Mt. Kilimanjaro in Tanzania. “I’ve been blessed.”

“To have someone like a Robert Townsend tell them to stay on the journey, you can imagine how important that was for us, and even for the community,” concluded Reed afterwards. “It was so important to have him here.”