In a scene being played out in communities across the country, workers at a town hall meeting with Congresswoman Betty McCollum urged Congress to take action to create jobs. “How many times have those in the upper echelons been bailed out in the last 30 years?” asked Craig Rice, an unemployed carpenter. “How many times have we had the opportunity to just go to work?”

Rice and several others at the meeting, held Sept. 27 in St. Paul, said they support the American Jobs Act that President Obama announced in early September. It would invest $447 billion in infrastructure and public services and cut taxes for workers and small businesses to jump-start the economy and create jobs.

Lynne Larkin Wright, who coordinates community service programs for the St. Paul Regional Labor Federation, sees the devastating effect of the current crisis every day. Families are falling apart and some people are even resorting to suicide because of long-term unemployment.

“The people who come in and talk to me would much rather have a paycheck than an unemployment check,” she told McCollum. 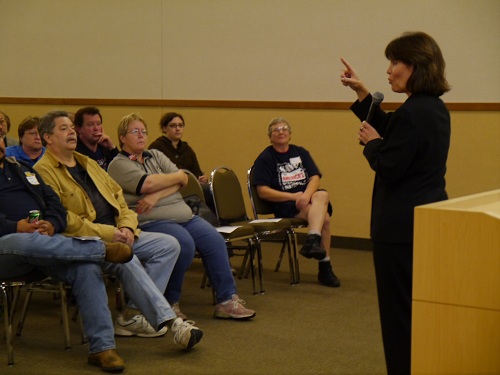 The national unemployment rate is 9 percent, but that doesn’t count those who have given up looking for work and those in part-time jobs who would rather be employed full-time. Some sectors, such as construction, have significantly higher rates of joblessness.

McCollum, who represents Minnesota’s Fourth Congressional District, is a co-sponsor of the American Jobs Act. She said it would provide significant relief to “get Americans back to work, put more money in the pockets of working Americans, and grow the economy.”

The legislation provides $50 billion to build and repair highways, bridges, rail, aviation and transit systems, including $608 million for Minnesota, which would create 7,900 jobs in the state.

Another 3,600 jobs would be supported in Minnesota through $275 million to modernize public schools, McCollum said.

The bill includes funding for local governments to prevent layoffs – and restart hiring –police officers and firefighters. Minnesota would get over $500 million to support these efforts. That would save and create as many as 3,600 Minnesota jobs, McCollum said.

The legislation would cut payroll taxes in half next year, saving $1,500 for households earning $56,000 and benefitting some 120,000 small businesses in Minnesota, McCollum said. The extension of unemployment insurance included in the legislation would protect more than 13,000 Minnesotans from losing this financial life-line.

McCollum emphasized that everything in the American Jobs Act is funded in Obama’s budget and “would not add a dime to the deficit.” Many of its provisions had bipartisan support in the past, yet the Republican-controlled House of Representatives is unlikely to act on the legislation.

That didn’t sit well with many at the town hall meeting.

“I don’t understand why we can’t cross – Republican and Democrat – and just shake hands to work this out,” exclaimed Donnie McMillan.

McCollum said all elected officials need to feel the political heat from their constituents.
“We’re hearing a lot of people tell us they want this jobs bill passed now,” she said. “Add your voice to that.”

See McCollum’s presentation and view more information from the town hall meeting on her website.