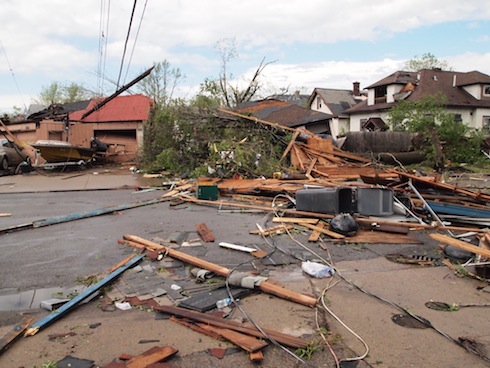 Along 35th, near Girard, all the garages from that area dumped in the street. (All photos ©Margo Ashmore.)

A tornado tore through North Minneapolis on Sunday afternoon, destroying homes and shattering lives in a community already devastated by the foreclosure crisis and recession. The photos below, by Margo Ashmore, show some of the damage. One person was killed and more than 30 hospitalized.

Want to help? Jeff Skrenes reports in his blog that Urban Homeworks is organizing a volunteer clean-up Monday morning at 8:00 a.m.  People are meeting at 1823 Emerson Ave N.

Residents were under a 9 p.m. to 6 a.m. curfew, the Red Cross set up a shelter, schools and public services were closed, and police patrolled the perimeter, and searched for gas leaks amid the downed trees and power lines. The city of Minneapolis advised that, “A Family Assis tance Center is also open at the Northeast Armory at 1025 Broadway St. NE. Family who want to check on loved ones should not go to the neighborhood, but instead should go to the center or call 651-268-8537.” 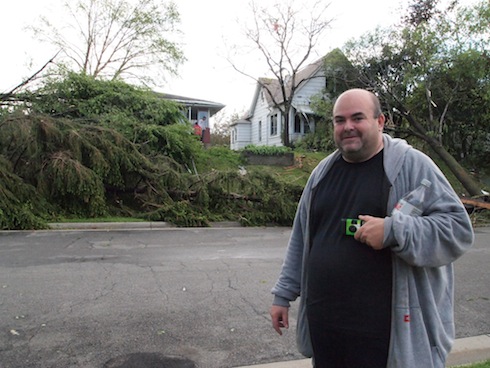 Marlin Weiss, of 3347 James Ave. N., said the tornado chased him down the alley about 400 feet away. He figured he had 20 seconds to get everyone in the house down to the basement; it took 15, and 5 seconds later the tornado passed over. They lost trees, and their fence was ripped apart but all the pieces seemed to be there. 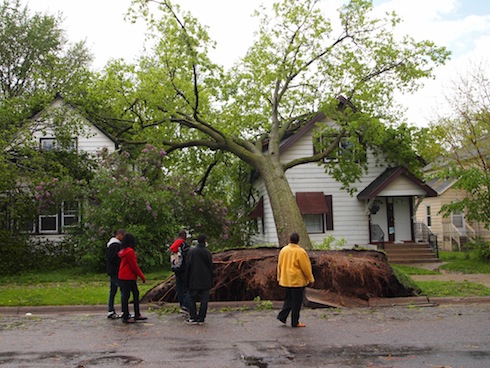 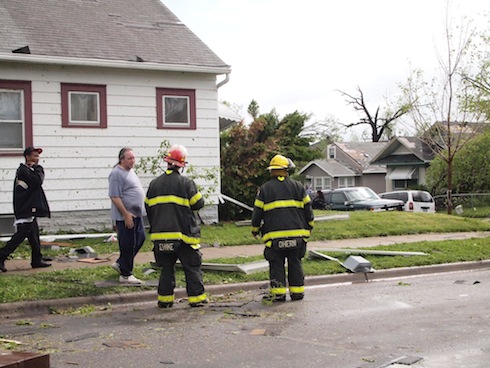 Along 35th near Girard, the resident asked firefighters if they were looking for gas leaks. They said yes. He later went in search of something to eat – his home lost chimney, windows, and garage, some shingles, but was in better shape than some. 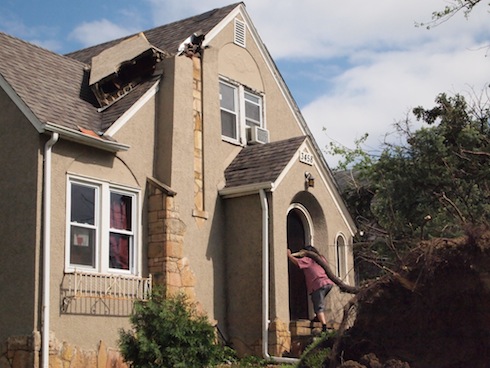 Chimneys snapped off throughout the tornado’s path, even those some on Tudor-style homes which are better integrated into the home’s structure than most. This is 35th and Irving SE corner. 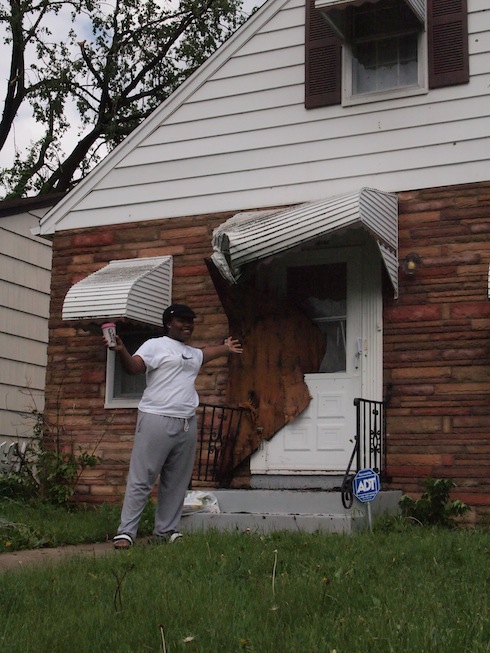 On Irving, 32xx block I think, a home that appeared otherwise unscathed had debris from another home slammed into its front door and awning. Resident was relieved. 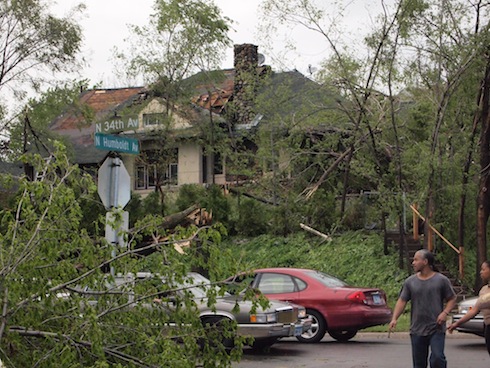 The Browns home at 34th and Humboldt had two chimneys, now has only one, and most of the trees surrounding the property are trashed. David and Alejandra Brown’s home was on the Minneapolis & Saint Paul Home Tour – a real neighborhood treasure, 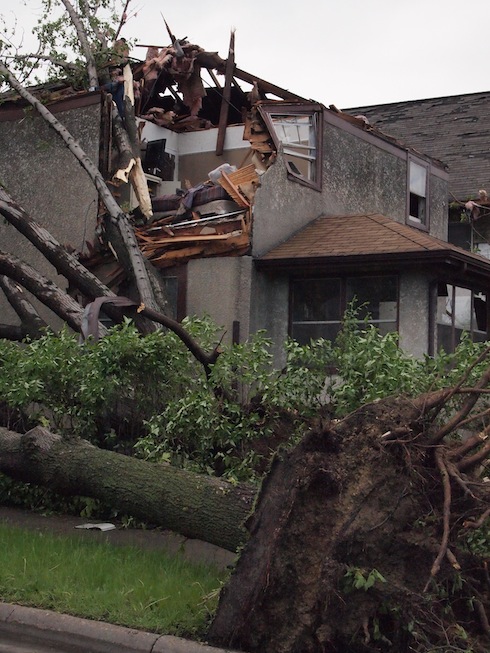 Northwest corner of 33rd and Irving lost its roof and part of the south wall, exposing a bedroom. 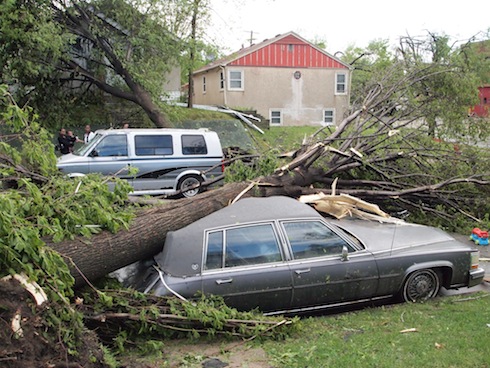 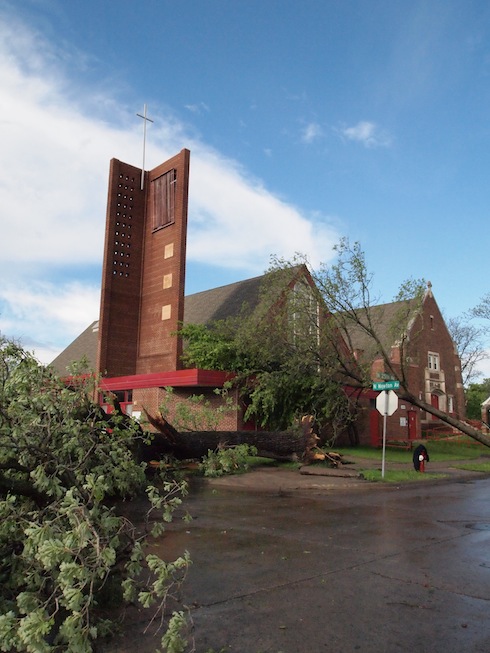 The tree closest to Jordan New Life church at 25th and Newton fell away from the church, another fell toward it but appeared to not have done much damage. It may just be the angle of view, but it looks like the cross was bent just a hair. 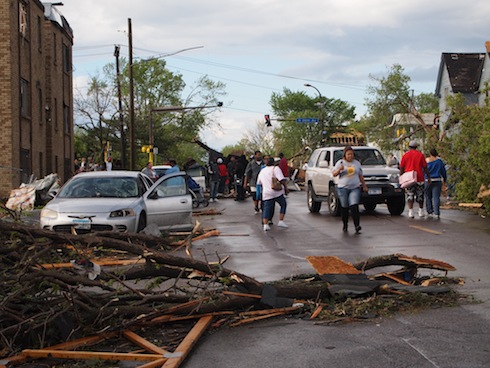 An apartment building at 26th and Penn suffered major damage, as did businesses in the area, Fire and Ice in the former Burger King, and the siding and awnings on other buildings. Utility poles snapped in half. 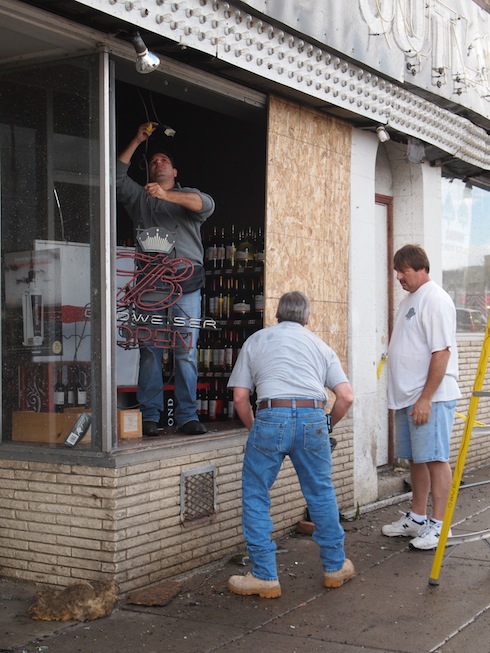 The roof came off the Broadway Liquor Outlet building and Dean Rose and his crew were boarding up the windows which also blew out. 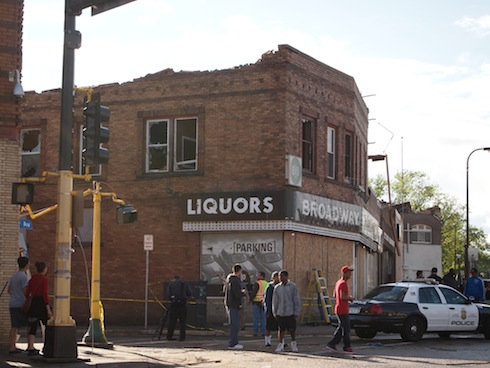 Observers in the area said there was some looting at the store immediately after the tornado. 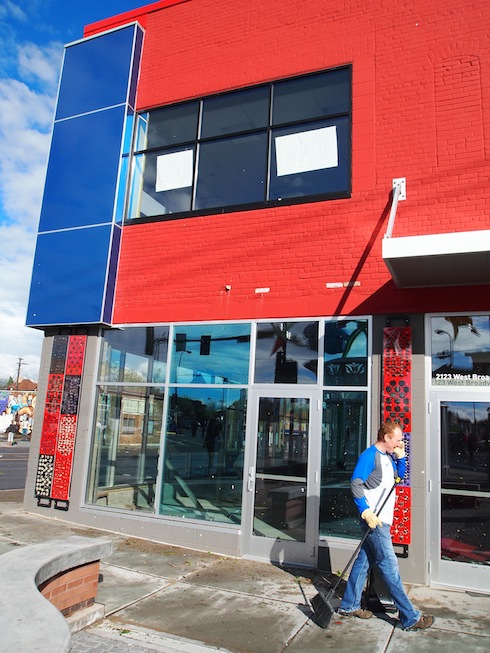 184 – At the 5 Points building, two signs in KMOJ’s window said “WE OK.” Stu Ackerberg was sweeping up. “Miraculous. We lost one piece of fascia from somewhere,” he said, picking up a twisted piece of red metal. One of the flowers in the new sculpture was bent back on itself, and two others damaged slightly, otherwise no damage. “I guess that’s the benefit of new construction.”