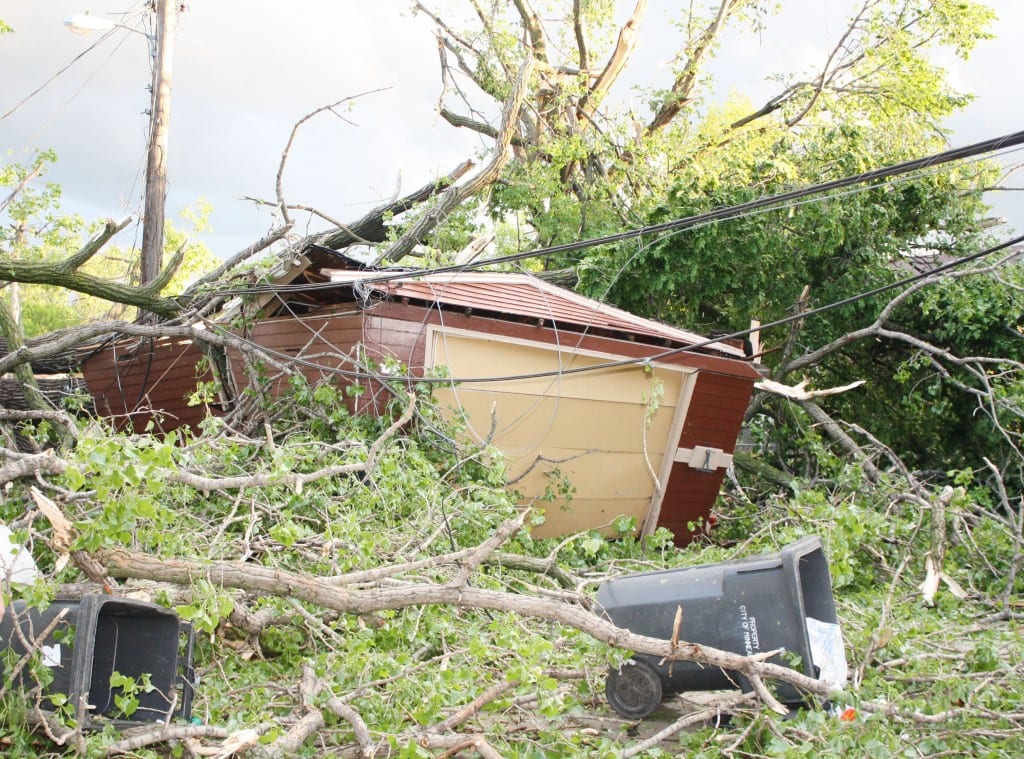 North Minneapolis residents are still assessing the extensive damage caused by the twister that tore through that part of the city Sunday afternoon. Several Spokesman-Recorder staffers were in the vicinity when the trees started flying. MSR Contributing Writer/Photographer James L. Stroud, Jr., who took the photos above, describes his experience: “After a Sunday afternoon photo session, I returned home to the corner of Thomas and Farwell Avenue in North Minneapolis. The only one there at the time, I heard the sound of what I thought was a speed train approaching the back of the house. “Immediately, I looked out of the window that faced my neighbor to the west. I could see the tornado approaching, and I fearfully headed for the basement. While moving quickly down the stairs, I heard a thump and then the power went out. “Although I consider myself a non-storm-chaser (the closest I’d come to a tornado growing up was watching Dorothy and The Wizard of Oz), I ran back up the stairs to see if it was going to hit the house. I saw my neighbor’s tree down in the street, lying from curb to curb. Apparently, the tornado hooked a sharp left to the north just before getting to me. 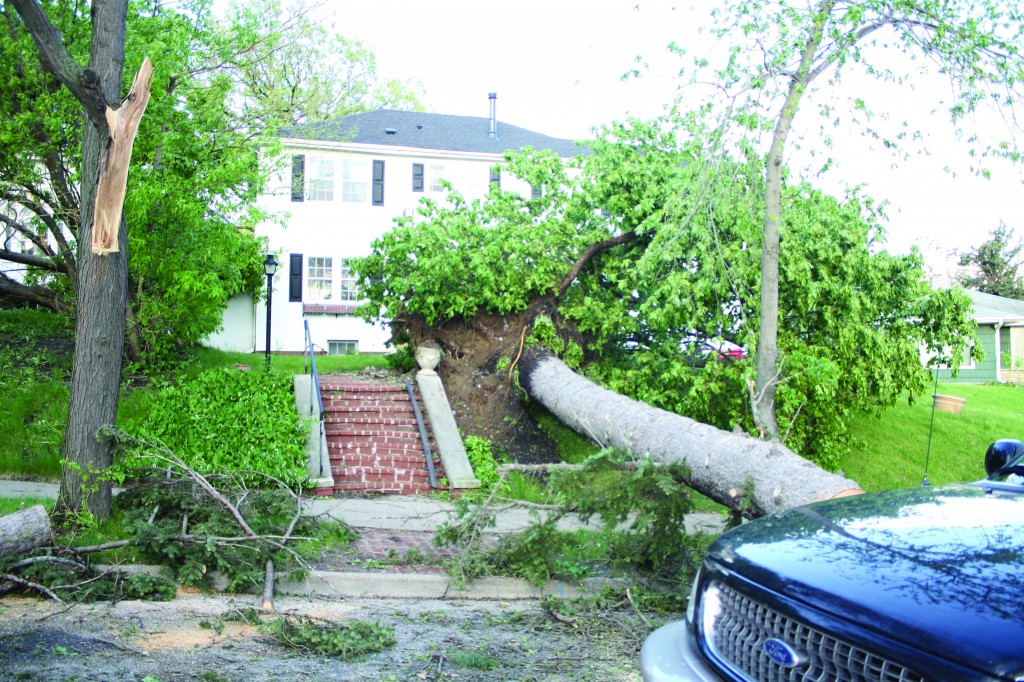 “There was no damage done where I was, but my neighbors on Upton, Washburn, Oak Park, and Vincent Avenues were not so fortunate. Still nervous but curious to see what happened beyond my next-door neighbor’s tree, I grabbed my camera, went outside and headed west on Farwell Avenue to the corner of Upton first. “The damage was so bad that trees blocked the pathway going in four directions. The power of the storm had pulled big, strong, healthy trees out of the ground by the roots. On Washburn Avenue, one of my neighbors named Rod suffered a heart attack and died while moving trees out of the street with a riding mower. I was told that it took the ambulance at least 30 minutes to get through the streets because of downed trees and gawkers in cars. “The entire above-mentioned streets had fallen trees, and roof and garage damage. One person reported that a Metro bus on Plymouth Avenue was hit by a tree. 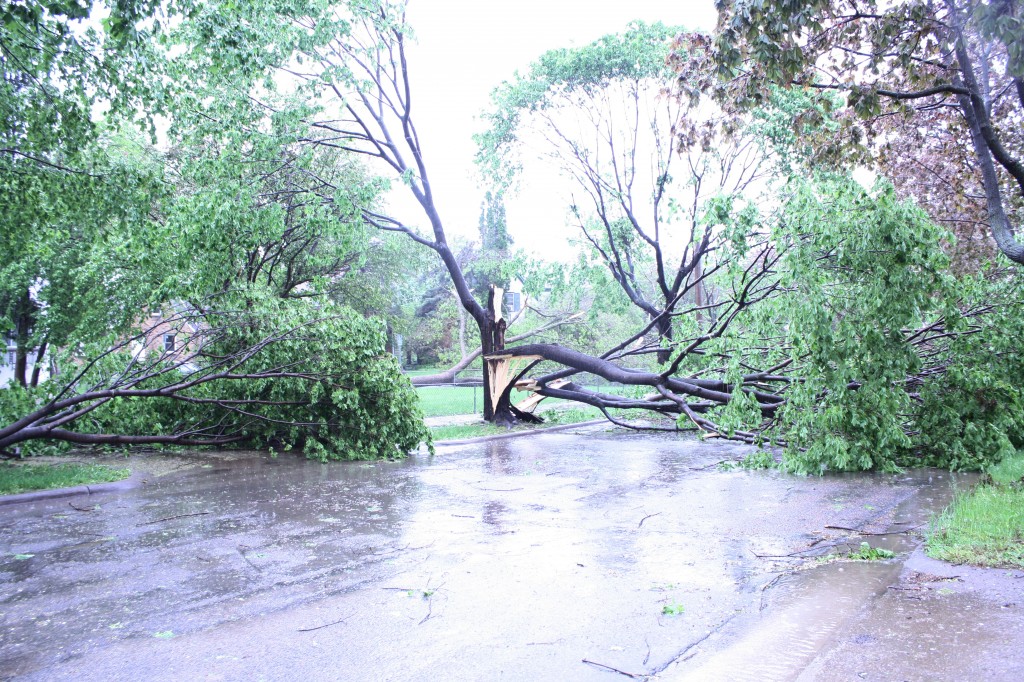 I continued to survey the area and capture it with photos.” MSR Community Editor Stephani Booker offers the following storm narrative: “My fiancée, Misha, and I were spending a Sunday afternoon at my mother’s apartment in Brooklyn Park. Misha and I were watching cable TV in my mom’s living room when my mom called out from her bedroom, ‘Steph, come here!’ “Misha and I went to my mom’s room, where she had her TV tuned to a local station. Live video from a helicopter showed Minneapolis streets strewn with whole fallen trees, houses and buildings torn to pieces. “‘Steph, do you recognize that building?’ My mother pointed to an image of a ravaged restaurant. “I did. ‘Dang, that’s the sandwich shop on Broadway!’ I said. It was Fire ’N’ Ice at Broadway near Penn Avenue North, where I once got a good chicken hoagie. “‘Isn’t that KMOJ?’ Misha pointed to a nearby red building. ‘They look okay.’ We were glad that the Five Points Building, where KMOJ-FM is housed, seemed to be undamaged. “Because our home is only a mile from the sandwich shop, I called a couple of neighbors who said the power was off in their homes and there was moderate damage in the area. Misha decided to head back home to check if we still had one. “Because of construction on I-94 north of Broadway, Misha had to take 694 all the way to I-35W south to I-94 going west and exit at Olsen Memorial Highway to get to North Minneapolis. Everything looked normal to her as she drove west on Olsen — until she turned north onto Penn Avenue.

“At one house, there was a tree with branches strewn over the front yard. When she turned onto the street where we live, long branches from another tree on our block covered half the road. Across the street from our house, a neighbor’s tree in their boulevard had completely uprooted and fallen into their yard, smashing their chain-link fence. Fortunately, the tree mostly missed the neighbor’s house when it fell. “Our home was undamaged, but we had no power. Misha packed clothes for us so we could spend the night at my mom’s and go to work at the MSR the next morning. On the way out of the neighborhood, Misha saw more fallen tree branches in yards and streets. “As she took Olsen Memorial Highway west out of the city, Misha looked out to the lake that borders the highway at Theodore Wirth Park. For weeks, there was a portable lavatory on a small dock on the lake near the highway, where some kind of work was being done on the lake. Misha noticed as she drove by that the lavatory had disappeared.”

MSR Contributing Writer Mel Reeves toured the stricken area Monday afternoon and observed the crisis bringing out the best in Northside residents. “The tornado that devastated the Near North Side did not devour the spirit as neighbor helped neighbor,” says Reeves. “There were young people volunteering their labor, and others brought food water and other groceries to KMOJ radio, which served as a distribution point. “Pastor Jerry McAfee expressed the sentiments of the survivors when he said, “As bad as it was, it could have been worse.

We didn’t experience what Joplin  [Missouri] did, thank God.’” State Rep. Bobby Joe Champion said in a released statement: “Although this was a powerful storm, it does not match the resolve of our community. We will come together to give shelter to those in need, clean up our streets, and ensure that families are made whole.” And from Congressman Keith Ellison: “The quick and effective actions of local first responders, Mayor R.T. Rybak and Gov. Mark Dayton testify to the resilience and determination of Minnesotans to work together and demonstrate the commitment we have to upholding one another. I join in the efforts already happening to ensure all federal resources needed for the emergency response and the recovery ahead are received as quickly as possible.”