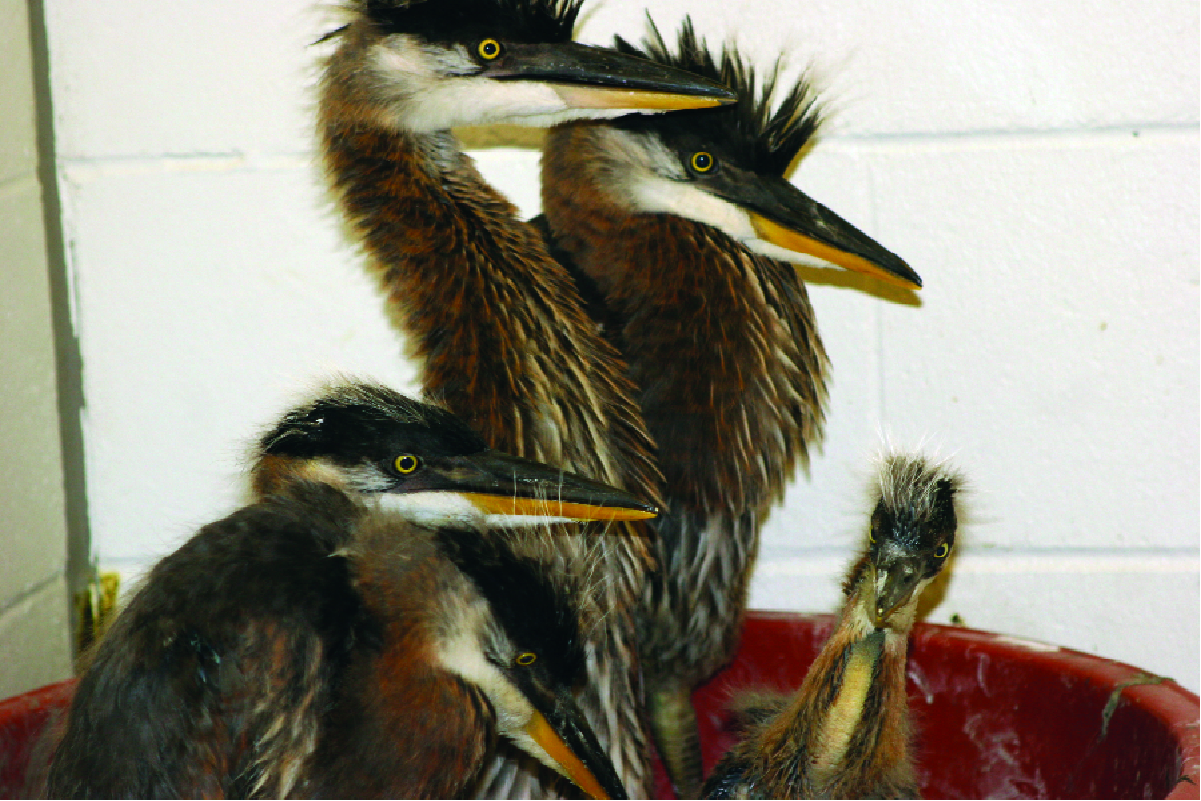 A few Baby herons (above) survived the tornado that took out their nesting area (pictured below).

Many birds and other animals lost their homes in the tornado that hit North Minneapolis on Sunday afternoon, May 22. When the tornado turned to cross the Mississippi at the Camden Bridge, it took out most of the trees on Heron Island, a small island on the Mississippi just north of the Camden Bridge. In the trees on the island were 63 great blue heron nests. Most contained three baby herons hatched in the early part of May. Baby herons cannot fly until they are about 60 days old, so these babies were completely helpless when the tornado hit.

It appeared that only nine of the baby herons survived, and they were taken to the Wildlife Rehabilitation Center of Minnesota (WRC) in Roseville, www.wrcmn.org.

Many of the adult herons also did not survive the storm, likely trying to protect their young. A large percentage of the trees in the southern part of North Mississippi Regional Park were down, many were completely uprooted.

Other birds and animals were also killed. A few survived including a fawn whose mother was killed by a falling tree. Other survivors are some baby rabbits, squirrels, robins, nuthatches, finches and chickadees that were rescued and taken to the WRC. 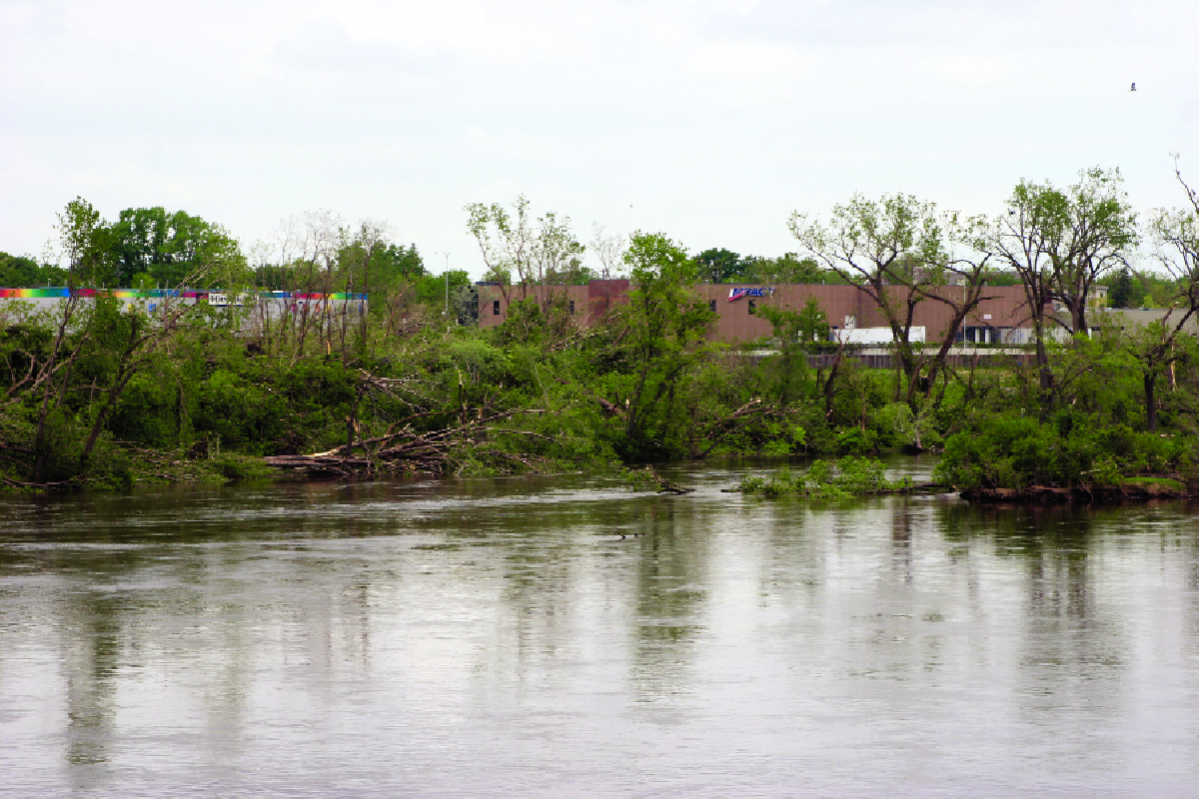 The day after the storm many of the surviving birds were flying around looking for their nests and babies. They looked puzzled, forlorn and almost lost.

Power was out at the Kroening Interpretive Center at North Mississippi Regional Park until Saturday, May 28. The wood turtles, salamanders, millipedes and corn snakes that live in the indoor aquariums survived the week without power and are doing fine, staff people said.

On June 3, all nine of the surviving young herons were in a large cage outside at the WRC. They had grown and looked much better then the week before. I was allowed to step in the cage to take some photos. One of the smaller herons, who was quite vocal, came up put its foot on mine and leaned against my leg. The caretaker said that is not their normal behavior.

The group of great blue herons came to the island eight years ago when many of the nests in a rookery to the north were blown away by a storm. Will they return next year? No one knows for sure but, the park staff is hoping that at least some will come back next year and rebuild their nests in the remaining trees. 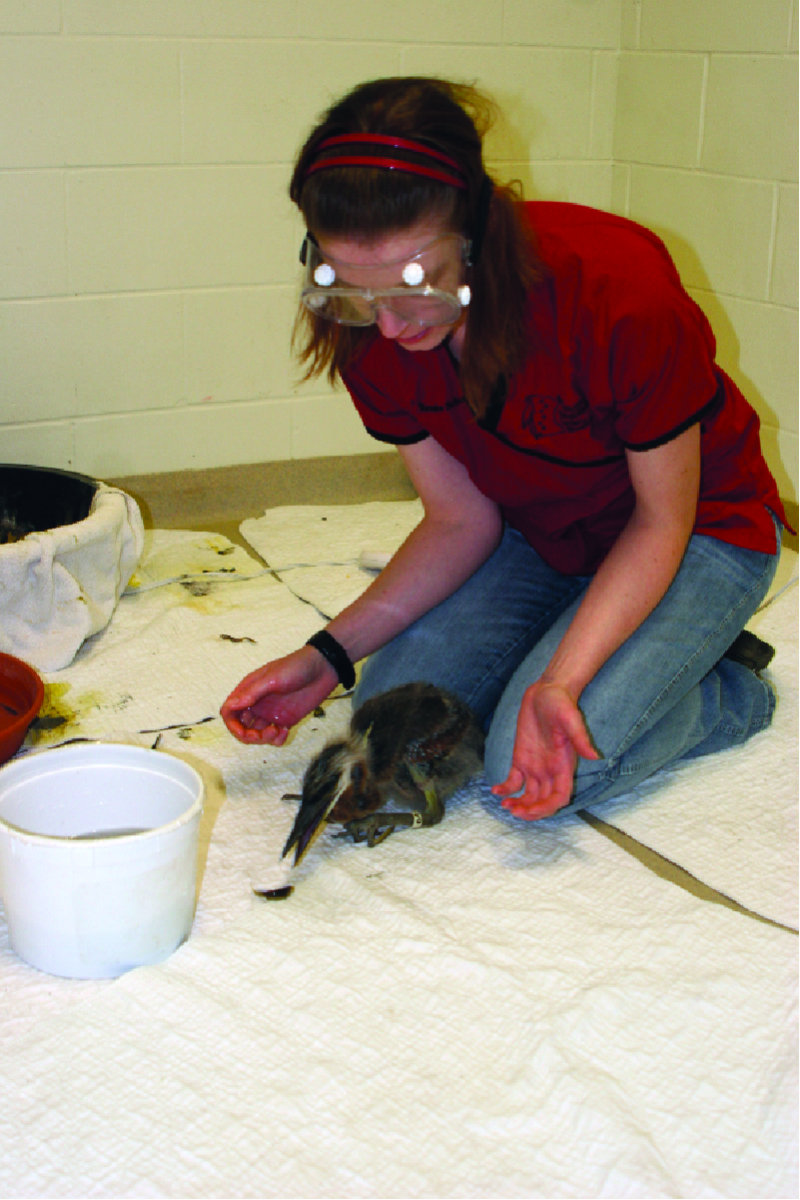 Herons recovering at the Wildlife Rehabilitation Center of Minnesota in Roseville, where Dr. Renee Schott (right) fed one of them May 25.

There are also baby nuthatches, robins and house finches at the WRC that have grown in the last week and were doing well. The most difficult part for the babies was making it through the first few days.

If you find wild animals or birds that need help they can be taken to the Wildlife Rehabilitation Center, 2530 North Dale St., Roseville 55113. 651-486-WILD (9453). The Animal Humane society in Golden Valley can also take wild animals. Both places emphasize that if you see a nest of baby animals that seem to be abandoned, watch it for a while to be sure the parents are not coming back. The parents may just be off finding food. It is common for nests to be left alone for short periods of time.