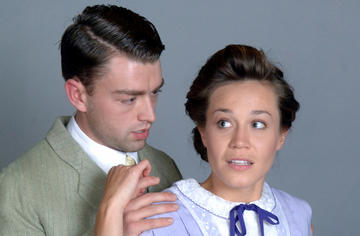 Casey Hoekstra and Joanna Harmon in Summer and Smoke. Photo © 2012 Act One, Too, Ltd., courtesy Theatre in the Round.

I begin this ritual post with the ritual disclaimer: I can’t say these are the ten best plays to be staged in the Twin Cities in 2012—they’re just the ten best among the plays I saw. The disclaimer is even more relevant this year, since I saw relatively few plays (for a theater critic) in 2012: I wrote about 31 in the Daily Planet, and saw a few more that I didn’t write about. That’s way down from my 2011 mark of 69 and my 2010 record of 88…but still, that’s a few plays a month. Among them, these ten were exceptional.

10. American Idiot, touring Broadway production (Orpheum Theatre, February). In a genre that’s become agonizingly hidebound in its conventions, Green Day’s musical stands out for its superb music and bracing nihilism. Updating the rock musicals of the 70s, Billie Joe Armstrong and his team convey both a sense of exhilaration and a daring suggestion of futility. Everything’s not meant to be okay.

9. Les Liaisons dangereuses, Urban Samurai Productions (Sabes JCC, October). Though director Jimmy LeDuc’s interpretation of this Christopher Hampton classic was far from perfect, it was revelatory insofar as it portrayed the feuding lovers as hapless schmucks rather than the gorgeously slick monsters to whom we’ve become accustomed. These characters felt like people you know—though hopefully not too intimately.

8. A Bun for a Door Handle, Theatre Forever (Forage Modern Workshop, March). This Jon Ferguson production, a sort-of sequel to his seminal You’re My Favorite Kind of Pretty (2008), drew a line directly between the imagination of a stage director creating a play and the imagination of a man and a woman creating a loving relationship. Ferguson remains one of our most essential, inventive local theater artists.

7. Buzzer, Pillsbury House Theatre (February). Though this production was well-executed from top to bottom—Hugh Kennedy won an Ivey Award for his performance as a recovering addict—the real star of this show was playwright Tracey Scott Wilson, who provocatively but constructively traced the contours of race relations in a gentrifying neighborhood. If you didn’t see this show at PHT, be sure to catch it in its February-March 2013 reprise run at the Guthrie.

6. Cat on a Hot Tin Roof, Guthrie Theater (January). Here’s what I’m learning about the Guthrie’s programming: they save the best for first. Both of the past two years have opened with exceptionally strong shows at Big Blue; in 2010 it was The Winter’s Tale, then in 2011 it was this scintillating production of the Tennessee Williams standard. The energy and tension in Lisa Peterson’s production started strong and only picked up as the evening went on.

2-5. You Don’t Have To Choose…, Samantha Johns and Savannah Reich (Lowry Lab Theater, February), Snowfuck, Samantha Johns and George McConnell (1211 Washington Avenue, June), Untitled Feminist Show, Young Jean Lee (Walker Art Center, January), The Only Story I Can Tell Is My Own, Billy Mullaney (Southern Theater, July). All four of these shows broke the boundaries of conventional theater; I group them together both for that reason and because they collectively illustrate the importance of taking risks and raising tough questions. Shows like this aren’t self-contained: they’re part of an ongoing dialogue that involves both artist and audience.

You Don’t Have To Choose…, part of the New Comedy series at the Lowry Lab, was a classic Johns/Reich production, smartly written and executed by an ensemble who work together so naturally and trust each other so deeply that they can evoke feelings other shows don’t touch. That mutual trust was also on display—along with five performers’ naked bodies—in Snowfuck, a semi-improvised show about intimacy that unfolded in a haunting set lined with plastic and filled with styrofoam pellets.

If nudity was central to the impact of Snowfuck, it was even more central in Young Jean Lee’s Untitled Feminist Show. Lee wouldn’t say the show was about nakedness—she said that only when her five female performers were unclothed could audiences stop seeing them lasciviously—but on stage, the performers’ nudity created a charged atmosphere that made Lee’s questions about gender and power feel very real and urgent.

No show this year, though, asked questions about gender and power in a more charged manner than Billy Mullaney’s The Only Story I Can Tell Is My Own. Mullaney’s show, a one-time performance for which every single audience member was required to have a long conversation with Mullaney before being admitted, was structured around a systematic exploration of a director-performer, and a male-female, power dynamic.

Many people who saw The Only Story hated it, and many who didn’t see it hated it even more. At least one performer wept (on behalf of herself, not a character) during the performance, and in the talkback a man in the audience apologized to the cast for being complicit in Mullaney’s violation of their trust—to which one of the performers fired back an accusation that the audience member was being offensively condescending to assume the performers weren’t in possession of free will. In the end, I was deeply impressed with the fact that every single time I described this show and its premise to anyone, it sparked a long and deep conversation. That makes it unique among all the shows I’ve ever seen, and for that, Mullaney and his collaborators deserve recognition.

1. Summer and Smoke, Theatre in the Round (October). This production of an underrated Tennessee Williams script got everything right, especially the confident and nuanced performances by Joanna Harmon and Casey Hoekstra. It was simply spellbinding entertainment from the first moment to the last, so good you wished you could bottle it up and keep it. But, of course, you can’t…such is the special magic of live theater, and no show I saw this year was more magical than this one.