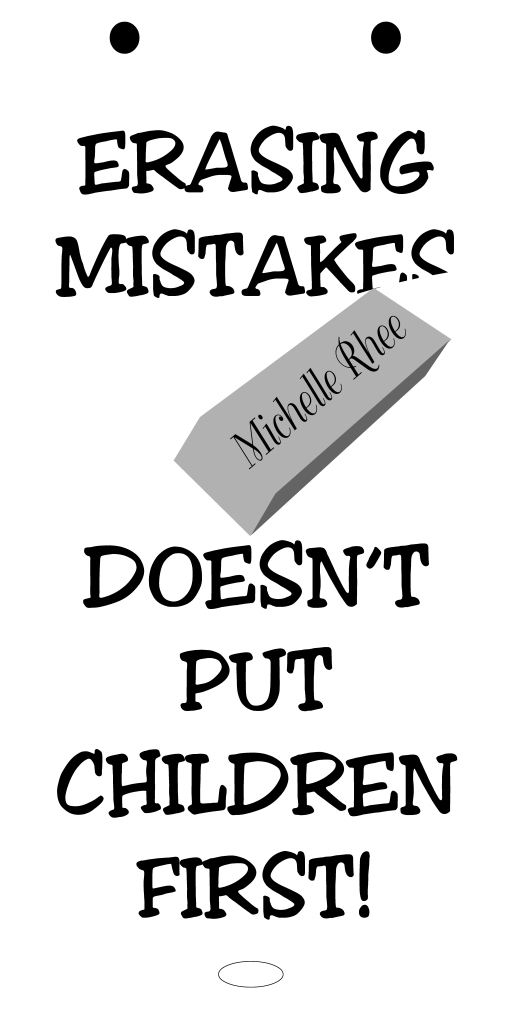 What is Rheeform? It is a catchall for the market based, destructive reforms that have become vogue since No Child Left Behind (NCLB). Michelle Rhee became the darling of the movement, gave it a personality, and a “liberal” that the plutocrats could hide behind.

The defining characteristic of market based Rheeform is what it does not do. Rheeform does not try and change how we teach. They want to change where we teach. How long we teach. What we teach. How we are hired, fired, and compensated. Who is allowed to teach. All of these are part of Rheeform, except, of course, how we teach.

This approach is not an oversight. The way we have taught for the last two hundred years has benefited and worked for almost all in power. The idea of a solitary teacher making a difference worked for them. The model of a teacher as some sort of independent contractor operating in an isolated classroom kingdom was effective for our politicians, business leaders, and school leaders themselves. As far as they are concerned, how we have taught is just fabulous. It worked for them after all. There are some real reforms with real promise that change how we operate as teachers, but that is a discussion for another day. Rheeform not only do not change how we teach. Rheeform reinforces a two centuries old model that failed most students. The consequences of focusing on the profit motive to guide education instead of the education motive, are obvious and inevitable. After the break, I will list my Top 10 outcomes of the Rheeform movement for 2011.

In no particular order,

D.C. was the epicenter of Rheeform. This is where Michelle Rhee got her start, closing schools, firing teachers, and stirring the pot. Competition, they said, will cure all of our ills. The problem with market based competition is that someone, or even most, have to lose for someone to win. Rhee may not have been directly responsible for the D.C. cheating, but her philosophies had the obvious outcome. Most of her touted schools cheated. The odds they did not cheat were said to be akin to winning the lottery several times.

2. Atlanta Cheating Scandal An investigation started in 2009 concluded rampant cheating in Georgia’s largest school district. Superintendent Beverly Hall denied all knowledge. Unlike Rhee, Beverly Hall spent forty years fighting the good fight in urban schools. She actually might be blameless, but is just another casualty of the inevitable outcomes of Rheeform.

3. Another Georgia county caught cheatingNot content with one major Rheeform cheating scandal, Dougherty County, Georgia got into the action in 2011. With no union protection, teachers were told by administrators to give students answers. Who were they to report to? their boss? It is no coincidence that most most of these scandals are happening where teachers have nowhere to turn when they are told to cheat. Destroying a balancing voice has its benefits for those in charge.

4. Rheeformed D.C. schools have the largest black-white achievement gap
Oh, also the largest Hispanic-white achievement gap. On the fourth grade math test, the D.C. gap was more than twice the national average gap. Our nation as a whole has a terrible gap, but theirs is twice that. Rhee’s biggest bragging point about D.C. is that she increased dramatically the amount of charter schools. You see, the market based goal of expanded competition is a goal in and of itself. When schools are closed under Rheeform, it is always the poor and underprivileged who have to move and find new schools. That is what competition does. It forces the kids who have the least to start over somewhere else, instead of making where they are, better.

“If what we’ve done in five years is to grow the enrollment and diversify the enrollment and brought the achievement levels up, but [when] we look at low-income black kids’ scores, they are no different than when I got here, then I would say I have failed,” Michelle Rhee

5. Milwaukee free market voucher Program no better than public schools After twenty years of public spending, the Department of Public Instruction finally decided to test Voucher School students in the same manner as public. It turns out the thing vouchers do best is siphon money from traditional public schools. They certainly don’t do any better at educating them. Even more importantly, the voucher schools do not educate the most costly students, the learning disabled, emotionally behavior disordered, or English Language Learners. The market based answer to the failed voucher program? Quit testing them and expand the program.

6. Success of Online Charter Schools I say success in the sense that they are fabulously profitable for the owner operators. This is at tax payer expense of course.

Once again, the voracious beast that is the profit motive has superseded any societal motive to education. You see, online charter schools are failing our students. That is why we must expand them. They are wonderfully efficient. The free marketeers drool at the prospect of one teacher teaching a thousand students. Less labor, and enrichment for a publicly traded company. All funded by us. To complete the incestuous cycle, Pearsons Publishing just bought the second largest online school, with $190 million in revenue. I wonder which text books Peasrons will require for its students, at taxpayer expense of course? Like choosy vultures, these online schools set up in the poorest districts because those districts can get the most state and federal aid.

A Stanford University group, the Center for Research on Education Outcomes, tracked students in eight virtual schools in Pennsylvania, including Agora, comparing them with similar students in regular schools. The study found that “in every subgroup, with significant effects, cyber charter performance is lower.”

7. The synergy of Billionaires and Plutocrats Bill Gates funds a great study on which states have the best teacher policies. By great, I mean for cheap labor. You see, according to the Gate’s funded study, the states with the best teacher policies just means “right-to-work” states. the top Gates states are actually pretty poor when it comes to educational outcomes. Once again, the market motive makes them rank high even when the educational motive shows them lacking. Then Gates bankrolled the corporate front group the American Legislative Exchange Council (ALEC) for them to write education policy favorable to those folks who don’t like to pay taxes.

8. Students literally tagged with test performance
In California they branded students with color coded ID’s based on test scores. What better way to motivate students than through humiliation. Those with the wrong ID’s had their own special lines. Privileges went to those with the correct ID. I wonder if they had separate drinking fountains. Market ideals.

States after states are using public workers and teachers as the tool to balance their budgets. In an economy ruined by private market players, rights are being taken away from teachers in order to fix our problems. The professional incentives for becoming a teacher are almost nil. These incentives have little to do with salary. They have to do with professional respect and appreciation.

10. Pay for Performance Doesn’t Work In the largest study of its kind, Vanderbilt University showed conclusively that pay for performance had little effect on test scores. This is obvious to those who understand human motivation. We are motivated to fulfill our basic needs first, but once we have achieved those, purpose is more important than profit. This is not to say that money is not important.

It is important to fairly compensate highly educated professionals. However, past a certain threshold people don’t obsess about money. Very few folks are actually motivated by money once they reach about $60,000. Money has been shown to motivate for menial, repetitive tasks, but not creative and intellectual tasks. Professionals just don’t sit around brooding about how much or how little their coworkers make. It’s just not something that matters day to day. Pay teachers fairly, but performance pay is a waste and insulting.