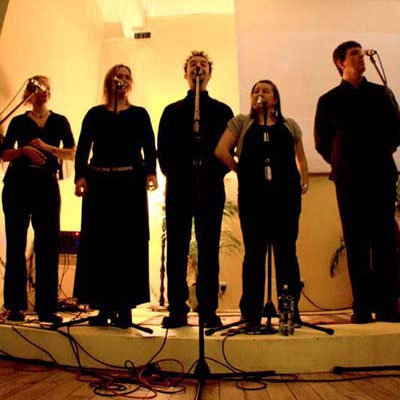 If you removed that gun from my head and I could see another 10 Fringe shows, what would they be and why?

“The truth isn’t going to get you anywhere in the business world!”- Livelihood

From the producers of the Fringe hit Musical: The Musical! and the author of American Apathy, part of City Pages Top 10 plays of 2008, comes Livelihood, a dark comedy that explores our corporate climate and the lure of wealth and power. Jason, a laid off professional looking to save his flagging career, finds himself at the mercy of Mike, the power mad executive conducting his interview.

These folks are a late addition to the action, after the program went to press. (If you crack open your paper Fringe program, they’re taking the place of the Ministry of Cultural Warfare’s play “Humility” on the U of M Rarig Center Thrust page – just look for the bloody snowman). Thankfully the internet doesn’t have such pesky deadlines, so there’s tons of information to be had, including video previews, attached to the end of this very post.

A late, but very welcome addition, I hasten to add. It’s a remount of another darkly comic script from Aaron Christopher, which I’ve seen a couple of examples of in recent years…

and of which I’m always mighty happy to see more. I didn’t see their ridiculously popular entry in last year’s Fringe – Musical The Musical – but from the size of their lines of audience members snaking out the door of the Rarig Center, I was one of the only ones. That wasn’t an Aaron Christopher script, so I didn’t feel too bad. This time around, it is one of his scripts. So I’m not missing it.

And now, those handy online resources to catch up on this late entry in the race…

A podcast at TC Theater Connection

For those of you who want a little more meat to sink your teeth into, how about a 6 minute retrospective on the previous production?

Was My Brother In The Battle?

A concert of songs about the individuals involved in America’s historic military conflicts, their friends, and their families – harsh, ironic, funny, patriotic, poignant, disturbing – images of America at war.

Ever since I started, several years ago, struggling to wrestle with a story about the “don’t ask, don’t tell” policy barring gays from serving openly in the U.S. military, I’ve been hyper-aware of members of the armed forces, whether I see them in real life, on TV or movie screens, in the pages of newspapers and magazines or online. Bringing that story to fruition, finally, last year, in Leave, did nothing to diminish my interest. The personal costs of war dog my consciousness. As they should all of us – both consciousness, and conscience.

This Fringe show uses song to dig into the heart of war, past and present. And it’s not all a downer. Tom Lehrer’s little ditty for World War III – So Long, Mom – alone is worth the price of admission. Lehrer can make even the threat of nuclear war amusing. An excerpt…

…I’ll look for you when the war is over An hour and a half from now.”

I’m so there. Here I thought I was the only blogger to notice this one.

Seems Phillip Low did a pre-Fringe profile of them already. So here’s that for further detail…

Phillip Low’s profile of the show

That Chair Was My Wife

So many chairs, so little time: A furniture salesman struggles in his extremely unhealthy obsession with chairs. That Chair Was My Wife explores a few themes: sexual addiction, power, and the all-consuming need to connect. For the playwright Raymond Luczak, the show was inspired by an actor friend who, one day at breakfast, slid into a chair opposite him and jokingly cooed, ‘Oooh, this chair makes me feel so sexy!’ News reports of people arrested for having sex with objects (a patio table, a bicycle, etc.) published over the years indicate that the show’s premise isn’t too far removed from reality.

A couple of Fringes ago, I was really looking forward to Raymond Luczak’s play “I Never Slept With Helen Keller” but that production came apart late in the game, so the Fringe show never came to pass. But now he’s back again with Deaf Blender Theatre…

“Deaf Blender Theatre company believes in encouraging Deaf and hearing people to work together staging American Sign Language (ASL)-oriented productions in the Twin Cities. Deaf Blender plans to both produce new works and adapt older works into ASL and it is particularly interested in presenting stories from within the Deaf community through its work whenever possible. The company is pleased to work with people whose signing skills range from beginner to ASL-fluent, and as well as with those whose theater experience falls somewhere between usher and producer.”

Deaf blender (dĕf • blĕn’d r) n. 1. A literary or other artistic event specifically designed to appeal to the senses and sensibilities of both Deaf and hearing communities. 2. Deaf Blender A theatre company based in the Twin Cities which presents this type of artistic experience exclusively.

I shall contain my excitement this time until I actually get to see it. But it still leaps up in the Top 20 list. In fact… (Fingers crossed)

The Morning After The Summer of Love

Back to rock the Festival for a second time, the artists previously known as the Belfastpoets touring group, bring you a new show, a new name and a drummer! These international poets stunned audiences into all (and only) five star reviews at the fringe in 2007 with “Pack Up Yer Troubles”. Now Scream Blue Murmur presents their new show tackling the legacy of 1968 with hard-hitting and humorous words, chants and beats. From civil rights, riots and revolution to sexual freedom and liberation, the group promises a show to rock you from your seat. Not quite poetry but not quite anything else!

At first, I was just taken with the name Scream Blur Murmur. And the fact that they were an international company coming all the way to Minnesota to entertain us. Then I saw that they’re the same people who gave us…

I love these people! They were called the traveling Belfast Poets last time. I don’t care what they call themselves, I’m really happy they’re back. They have some samples of the song work they’re doing these days, too, on their MySpace page. If I hadn’t already been a fan, their version of that fabulous old Leonard Cohen song “Everybody Knows” would have completely won me over. Then, what I’m assuming are their own compositions – “Masters of War” and “Holding Back The Tide With Bare Hands” – would have sealed the deal.

Give them a listen – www.myspace.com/screambluemurmur

Song and poetry, with Irish accents, at the Fringe. Love it.