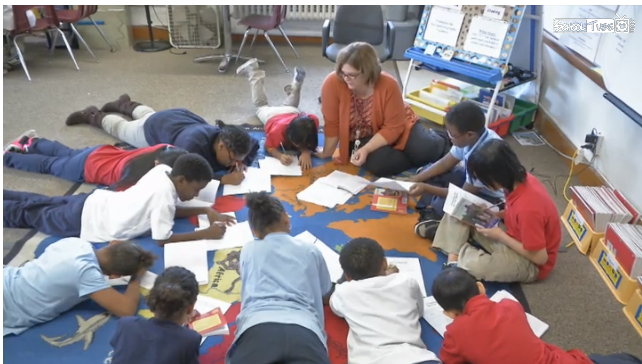 Screen shot from "General education and special education co-teaching in St. Paul Public Schools." See video below. According to teachers and parents, co-teaching makes mainstreaming work for all the students in a classroom.

Mary Moore, a Special Education Building Coach at Battle Creek Middle School, tells a success story of mainstreaming in St. Paul. A student, now in middle school, had been classified as Emotionally and Behaviorally Disturbed (EBD) since kindergarten, and had not been in a regular classroom since that time. Last fall, he was mainstreamed — put in a regular classroom — as part of St. Paul Public Schools (SPPS) effort to reduce racial disparities. His behavior has improved enough so that he has moved from the more serious “Fed 3” classification to “Fed 2.” He also enrolled in the AVID program for success in school. The process of mainstreaming, said Moore, “turned him into a different person.”

EBD is one of the “special education” categories. In the 2011-2012 school year, black students made up 544 of 707 SPPS students with emotional disabilities — a hugely disproportionate number.

That disparity is part of the reason SPPS this year started mainstreaming “Fed 3” level EBD students, who have historically been separated from regular classrooms. While some working with Special Education students feel it’s the right move, other teachers see it as a danger that creates an unsafe environment.

When it comes to discipline, what strategies succeed? Mainstreaming is just one of the St. Paul Public Schools (SPPS) programs that affect discipline and racial equity in schools. The picture is as complicated as a Hmong paj ndau story cloth. Pull on the discipline thread, and other threads follow — not only mainstreaming, but also PBIS, racial equity training for teachers, focusing on suspensions, and even principal bonuses. This article focuses on mainstreaming, but that’s only one part of the story, with more articles linked to our School Discipline page. We are still looking for more stories — your stories, from your perspective as a student, parent, teacher, principal, or district administrator.

Roy Magnuson, a teacher at Como Park High School, said of all the years he has been teaching, this year has been by far the worst in terms of the number of fights in his school. He says mainstreaming emotionally disturbed students is a big part of the reason.

Recently, Magnuson spent two hours at juvenile court because of an attack that had happened at Como five weeks earlier. Ultimately the student was adjudicated delinquent, and Magnuson believes he did the student a favor, by stopping him from doing something much worse. The student in question, according to Magnuson, was previously an EBD student, and Magnuson blames putting him in the regular classroom for the attack.

School Board member Mary Doran admits that the process of mainstreaming all EBD students at the beginning of the 2013-14 school year did not go smoothly. “It was rough,” she said, adding that some kids — less than 50 — couldn’t handle mainstream classrooms and were sent back to the relative isolation of Special Ed classrooms. The rest of the EBD students “are thriving” after mainstreaming, she said.

“The reason we discontinued that isolation is there was no academic movement in special ED or EBD students,” said Doran. “We began mainstreaming them so that they can get the education they deserve. Was it difficult for some of our middle school and high school students because they were closed off? Absolutely. Some of them had a difficult time. Principals and teachers have said it was the hardest year we ever taught, but it’s been worth it. These kids are striving and they are succeeding.”

Jasmine Smith, a Special Education Building Coach at Ramsey Middle School, sits in on administrative meetings any time a student is disciplined, and oversees and supports special education teachers. She’s in her third year with the position, after having been a team lead.

According to Smith, the reality is that students are being mainstreamed at the same rate as they had been before this year, but that people are hearing about it more this year.

When Smith came to Ramsey, Fed 3 level EBD students had a separate lunch period and were placed in a locked part of the building. Smith brought with her a philosophy that those students should be able to be in the hallway, eat lunch with others and “earn” opportunities to be mainstreamed.

The difference this year, she said, was the movement toward inclusion where “all kids start out having one mainstream class to give them that opportunity,” she said, “and make them feel they were part of school to begin with.”

“This isn’t a Special Ed problem,” Smith said. “It’s more about why isn’t this place working for all kids. We need to stop focusing on Special Ed and [focus on making the school] a place that black kids can be successful.”

Not all cases went smoothly. “We have had situations where kids weren’t ready,” she said. “Each child we looked at specifically.”

For this year’s transition, Moore said the teacher negativity wasn’t as bad at her school because of steps taken at the beginning of the year such as training she gave to help teachers who were having a hard time.

“I kind of think teachers were overreacting,” she said of what she’s heard about other schools. “They weren’t really giving the kids a chance and judging them before they got to know them — that’s upsetting to me personally in that they are mostly black boys.”

What Moore likes about what the district is now doing with Special Ed is that it’s trying to use equity work and see Special Ed with a different lens before labeling students EBD.

Please see our other articles in this series about how St. Paul Public Schools are addressing disparities in disciplining students- see the links below.