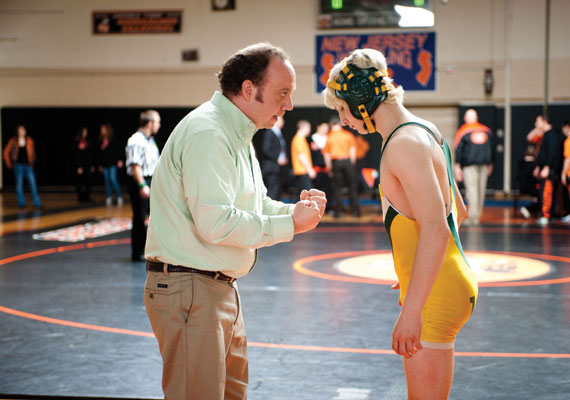 After acting in a few features and television shows, writer/director Tom McCarthy surprised audiences and critics alike across the world with his 2003 offbeat dramedy The Station Agent, which was named by the National Board of Review as one of the top ten best films of the year.

In 2007, McCarthy’s second feature behind the camera was the equally impressive The Visitor; his lead actor Richard Jenkins received an Oscar nomination for Best Actor. In 2009, McCarthy himself was nominated for an Academy Award along with Peter Docter and Bob Peterson for Pixar’s animated hit Up. During the mid-2000’s, McCarthy also starred in a number of box office hits and Oscar-nominated films—Syriana, Good Night and Good Luck, Duplicity, Fair Game—and was a prominent character in the fifth and final season of HBO’s magnificent television series The Wire, playing a reporter looking for his big break.

His third feature as writer/producer/director, Win Win, a dramedy, again shows McCarthy to be a natural. The film premiered at this year’s Sundance Film Festival to rave reviews and could potentially be a sleeper hit this spring; the film opens at the Uptown Theatre this Friday. Win Win stars Academy Award nominee Paul Giamatti as Mike Flaherty, a New Jersey attorney who is having trouble keeping his business afloat. Outside of his law practice, he volunteers as a high school wrestling coach, for a team that’s less than spectacular. As Mike is close to coming unglued with his struggling law practice and mediocre wrestling team, by chance he takes in a young man who has come to visit Mike’s grandfather, who Mike has decided to take care of by putting him into a retirement home rather than leaving him at his own home, in order to collect a monthly stipend.

As it turns out, Kyle (newcomer Alex Shaffer) was a state wrestling champ in Ohio, and Mike decides to enroll Kyle into the school and has him join the losing wrestling team to improve the team’s morale. But things get complicated when Kyle’s newly sober mother shows up looking for her son and wants him to come home to Ohio with her. The film features a great cast, including Academy Award nominee Amy Ryan (Gone, Baby, Gone) as Mike’s wife who has some great lines in the film, Bobby Cannavale (The Station Agent), Jeffrey Tambor (Arrested Development), and Academy Award nominee Burt Young (Rocky). Win Win should be just that for McCarthy, once again.

McCarthy traveled to the Twin Cities a few weeks ago, before the film opened on the coasts, and he was in good spirits. He mentioned that a preview screening of the film the night before had many friends and relatives in attendance, and that the Q&A following the screening was a very lively discussion among the packed house. Sitting down at a Minneapolis hotel, we talked about wrestling, Paul Giamatti playing against type, and whether attorney-slash-wrestling-coaches actually exist. My first question for McCarthy was: How did you come up with the idea of having an attorney also be a wrestling coach?

Press the play button below to hear the interview.