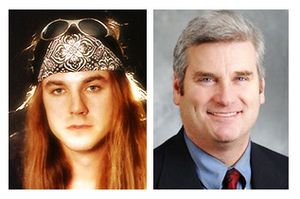 Andy Birkey at The Minnesota Independent has been doing fabulous yeoman’s work on the connections between the Republican Party of Minnesota and homophobic Christian Punk “ministry” band, You Can Run But You Cannot Hide.

That was followed up by Emmer campaign donated to controversial Christian punk-rock ministry.

And Birkey bird-dogged the story with Emmer on anti-gay hard rock ministry: ‘These are nice people’:

The Republican-endorsed candidate for governor, Tom Emmer, told the Star Tribune’s Rachel Stassen-Berger that You Can Run But You Cannot Hide Intl., Inc., “are nice people.” You Can Run is a ministry that brings it’s hard rock evangelism into public schools across the Midwest and its front man, Bradlee Dean, told radio listeners recently that Muslim countries that call for the execution of gays and lesbians are “more moral than even the American Christians.”

Emmer’s campaign has given money to the ministry, and Emmer has appeared on Dean’s radio show, been to Dean’s house and posed for a picture with leaders of the ministry following his endorsement by the Republican Party.

“My understanding is that it’s a Christian-based ministry that’s about family, that is about respect for yourself….I know that they’re a pro-marriage, pro-traditional marriage group,” Emmer told the Strib.

Bradlee Dean, front man for the group, lives in Annandale, which is in my state senate district, so the story quite literally is playing out in my neck of the woods.

Perish the literal-mindedness, though. Time for a poem! Here’s a riff on a charming classic by that naughty D. H. Lawrence:

The Homophobes Are So Nice!
By Tom Emmer

The homophobes are so nice
so awfully nice
they are the nicest people in the world.

And what’s more, they’re very nice about being nice
about your being nice as well!
If you’re not nice they soon make you feel it.

Gays and Lesbians and Bisexuals and so on
they’re all very well
but they’re not really nice, you know.
They’re not nice in our sense of the word, are they now?

That’s why one doesn’t have to take their humanity seriously.
We might be nice to them, of course,
maybe, unnaturally-
But it doesn’t really matter what you say about them,
they don’t really matter-
you can just say anything about them:
be nice, you know, just be nice
but you must never take them seriously, they wouldn’t understand.
Just be nice, you know! oh, fairly nice,
not really nice of course, they take advantage-
but nice enough, just nice enough
to let them feel they’re not quite as nice as they might be.