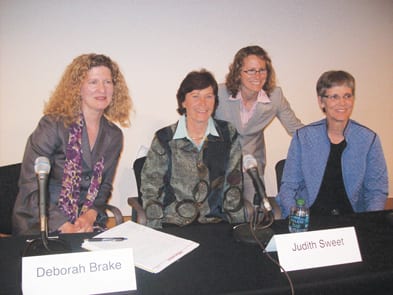 Congress passed and then President Richard Nixon signed Title IX in 1972, a 37-word amendment to the 1964 Civil Rights Act. Now 40 years old, it wasn’t intended for this, but athletic participation among girls and women nationwide has greatly increased ever since: 294,015 in 1972 to 3 million in 2011.

Brenden as a St. Cloud Tech High School senior successfully sued her school the same year Title IX became law for the right to play tennis on the boys’ team since at the time there wasn’t a girls’ tennis team.

I asked Sweet, a former NCAA senior vice president (2001-06) and University of California, San Diego athletics director (1975-99), how Black females have fared from Title IX. “I wish I had the answer to that,” she admitted.

“The data on who benefited the most [from the law] have been disapportionately White women” especially in “country club sports” such as soccer and lacrosse, believes Brake, a University of Pittsburgh law professor and former NWLC senior counsel.

Before her April 18 speech on Title IX’s impact on her life at the University of Michigan, sponsored by the SHARP Center, I posed the same question to legendary basketball coach C. Vivian Stringer, the only woman college coach to take three different schools to Final Fours (Cheyney State, Iowa and Rutgers).

“If you want to say — Black and White women are thrown into the same category — women, did Black women benefit from Title IX? Yeah, but we didn’t have anything in the first place so how could we’ve not!” proclaimed Stringer, who talked about how she grew up “in a time when Title IX wasn’t even a word” in Edenborn, PA, a small town she calls “a patch [made up of] about four rows of houses.”

Stringer says she hated playing with dolls, but rather wanted to play sports. She painfully recalls when she tried playing baseball, but never made the team. “I was being denied an opportunity to play baseball because of my sex and not because of my performance,” she recalled. “That hurts.”

The longtime coach later attended Slippery Rock University on an academic scholarship — athletic scholarships were nonexistent for women at the time, says Stringer, who played basketball and field hockey. “I was always athletic,” she said proudly.

But she was constantly reminded, either subtly or right out loud, that she’d never be considered the same as a male. “[Men] could be anything they wanted to be, but look at the generations of women that never had the chance to be anything we want or [have] much of a future because there wasn’t a chance to get a [college] scholarship.”

“But because [Title IX] doesn’t adequately address race, we still see disparities for people who live a life in a race body — be it Asian, Hispanic or African descent. When people talk about gender, they’re talking the White woman’s experience, but what about the Black female?” said Dr. Ketra Armstrong, a University of Michigan sport management professor.

“When you see Vivian Stringer,” she added, “you see the embodiment of what’s best about Title IX. [She] has navigated those boundaries.” The professor surmised that when people see Stringer in action, it’s “a vision of excellence.”

“You have to continue to fight for what’s right,” concluded Stringer. “I will always be a fighter — there always will be a need.”

Next week’s View will have more excerpts from our one-on-one interview with C. Vivian Stringer.