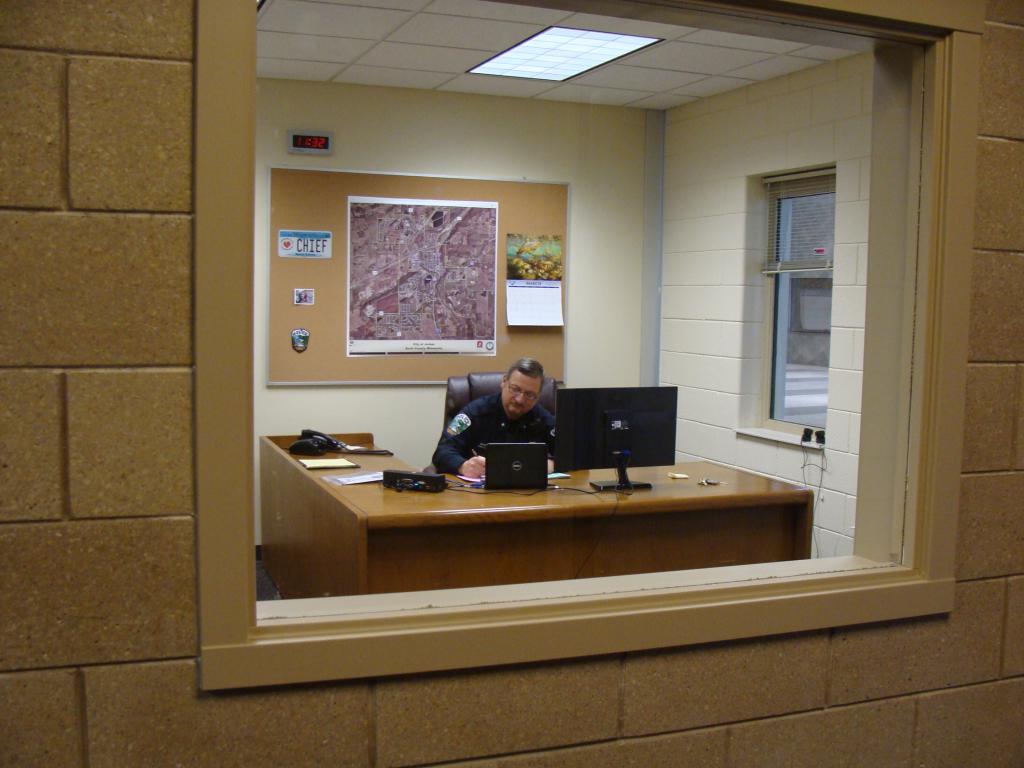 Jordan police chief Bob Malz admitted that the large picture window in his new office at Jordan High School made him feel a bit like a “new attraction at the zoo.” Below: The presence of a police car in the Jordan parking lot should also serve as a powerful crime deterrent, Malz said. (Photos submitted and by staff)

“Officer Empey, am I going to get shot today?”

These words are something no one should ever have to ask. But coming from a six-year-old kindergartner, it’s especially harrowing and heartbreaking.

In the terrifying, chaotic aftermath of the Sandy Hook Elementary School shooting in Newtown, Conn., many schools across America have started taking extra precautions for the betterment of student safety. There’s a range in just how far each school district will go, of course.

Post-Sandy Hook, the quiet city of Jordan (36 miles southwest of Minneapolis) decided its own unique, perhaps unprecedented, approach was worth pursuing. So they moved a portion of their police department — including the police chief, full-time — into four schools in mid-March.

The route Jordan has taken to protect its students was suggested, and in no small part, carried out by Bob Malz, Jordan’s police chief.

Malz cited a statistic that no school shooting has ever occurred when an officer on the premises had a gun. That, coupled with the need to cut down on police response time in the event of a school shooting, fueled his motivation to move a desk inside Jordan High School.

“I just kept thinking over and over, ‘Boy, it would sure be nice to be closer.’ The average shooting is three to seven minutes. Well, it’s going to take me five minutes just to get from my office to this school,” Malz said.

“I want to cut down response times as best I can. And if somebody marches through this door with an assault rifle and there are kids out in the commons, I’m probably not going to get to save everyone. But I’m gonna cut it down …”

In a December letter outlining his proposal to the Jordan superintendent and school board, Malz wrote, “Personally, I dread the thought of being included in the sentence, ‘We don’t want what happened in Columbine, Red Lake, Cold Spring Rocori, Newtown and Jordan to happen in our community.’”

Given that outside help didn’t seem to be coming, Malz grew tired of waiting. In the aftermath of Sandy Hook, he made it clear in his letter that it was time for outside-the-box thinking and the utilization of “our current resources to their fullest in order to hope to make any kind of difference.”

“Whether it’s 9/11 or any major events that have happened, you sit and watch coverage of it, and your heart just goes out to the people involved. I’m a parent. I have four children. I’m not just a police chief. I know how devastated I’d be if my children were killed. And so I thought, ‘What can I do on a local level? What can I do?’” Malz said.

“All I want to do is what’s best for my community, and I threw a plan out there. The first time I presented this plan was with the principals, the superintendent and the school board chair. And the first thing that came out of the middle school principal’s mouth was, ‘It’s so simple, it’s brilliant. Why haven’t we thought of this?’”

That Jordan is a sleepy community of 5,000 people allowed for a rather manageable transition from an isolated downtown City Hall office to the entryway of a high school with 500 students, Malz said. In all, four Jordan schools — Jordan elementary, middle and high school, along with the private St. John the Baptist — have been outfitted with the necessities to keep Malz’s plan running smoothly.

Jordan has a police force of eight. To provide 24-7 police coverage, at most only three officers are on duty at one given time. A rotational system has been devised to make sure an officer is covering the schools, especially given that Malz isn’t in his office all day because of meetings and committee responsibilities.

As for added costs, each school gave up the office closest to its main door — in Malz’s case, he took over Principal Barb McNulty’s office (she moved across from him) — then added a large window for visibility and a few new computers.

“To have four schools with cops in them, for $20,000 dollars, that’s a pretty good deal all the way around … It’s not a huge cost. And if you think about how we’re outfitting four offices completely with everything we need, at $5,000 an office, and it’s not a recurring cost, it’s a really good deal,” Malz said.

“Each community has to get together and decide what’s right for them. But we have to create some type of marriage between schools and police if we have any chance of stopping these (shootings).” 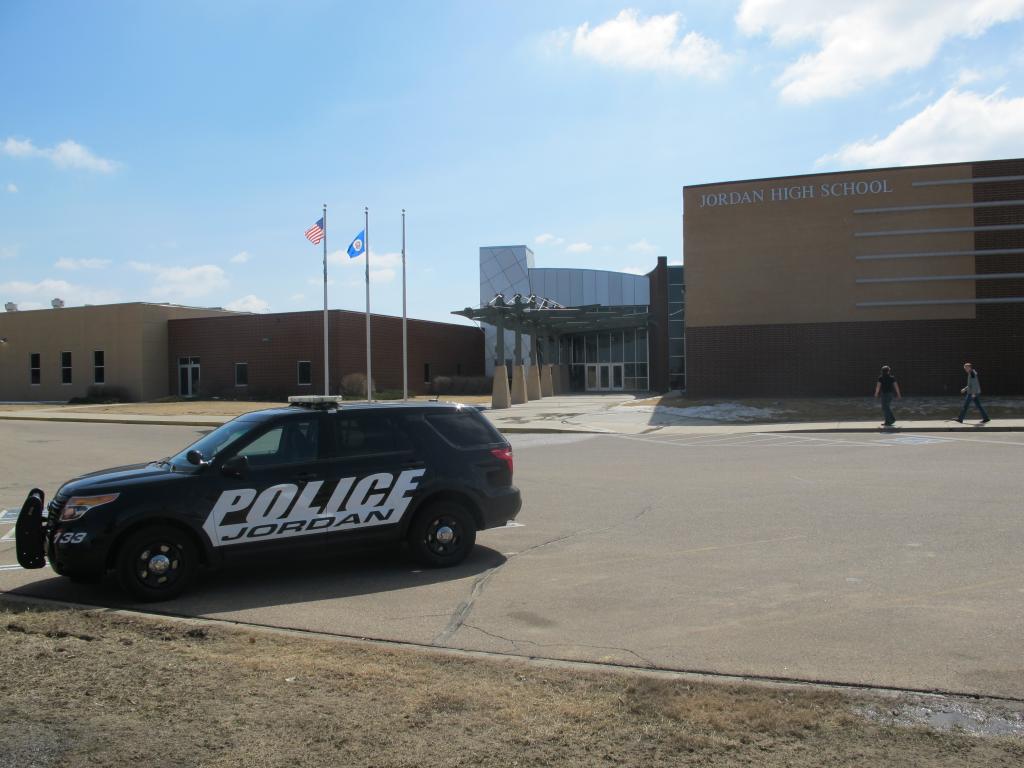 The goal, Malz said, is also to create increased visibility with students, hopefully fostering a trust at the early elementary school level that will then spread to the high school years. Jordan Elementary School principal Stacy DeCorsey has already seen the benefits, as has officer Brett Empey, whose blackboard is filled with playful greetings from kids.

The added traffic in Malz’s prime viewing spot has made for a new dynamic that he’s still getting used to. Teachers and students have stopped by to introduce themselves, drop off baked goods or simply offer a smile. One student, who disagreed with having armed officers in school, briefly debated Malz before being invited to return so the matter could be discussed further.

“I have to be approachable,” Malz said. “The first three days, I had maybe five-to-ten students come in. And hopefully they’ll go to their friends and say, “That cop, he’s not a bad guy. I went and talked to him.’ And it gets out. It’s like social media, right?”

Simply having a Jordan police car at the entrance of the high school parking lot is also a major deterrent. Malz is confident that Adam Lanza, the Newtown shooter, wouldn’t have “taken on a school with a police officer there.”

However, the plan was not implemented for Jordan officers to be utilized as hall monitors to break up fights or settle disputes. Their presence is for emergency purposes only, Malz said, and he stresses that each school is still “the principal’s building.”

That said, the student hoax that sparked back-to-back emergency responses in New Prague — 10 miles south of Jordan — only confirmed the importance of the schools’ new plan. Though the March incident proved to be a false alarm, Malz was on scene for the “live situation” and learned a lot of key lessons about advanced planning and communication.

The residual effect was also felt back at the elementary school in a big way, DeCorsey said.

“Typically, in years past, we would have gotten together and decided if we should do a lock-down, or if we don’t, to make sure kids were safe, because it was only a few miles down the road,” she said. “But we had officer Empey right here. And everyone just had this sense of calm. And we felt safe. We felt secure. Officer Empey came to me and said, ‘This is what’s going on.’ He had a direct link to the officers with his radio, and knew what was going on and confirmed things for us,” DeCorsey said.