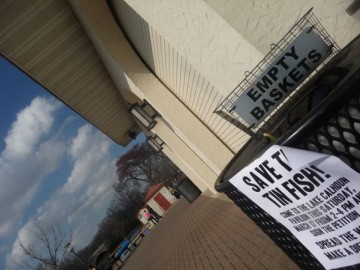 Lest one doubt the passion and power of neighbors working together for the common good, read on.

E-mails and Facebook postings started flying through cyberspace shortly after the Minneapolis Parks and Recreation Board (MPRB) Finance Committee unexpectedly launched a discussion of their lease agreement with the Tin Fish Restaurant casting doubt about its season opener scheduled for April 15.

This happened on Wednesday evening, March 14. The expectation was that the full Park Board would make a decision the following Wednesday. ECCO President and environmental leader Sarah Sponheim had attended the MPRB meeting and sounded the alarm. Several local activists quickly responded, a public rally was organized and the word went out. The activating phrase quickly became “Save the Tin Fish.”

By Saturday afternoon, March 17 Uptown residents had gathered at the popular restaurant on the northeast corner of Lake Calhoun to show support. Neighbors and passers-by were invited to sign a petition intended for the Park Board. Home made signs were displayed and conversation ensued. 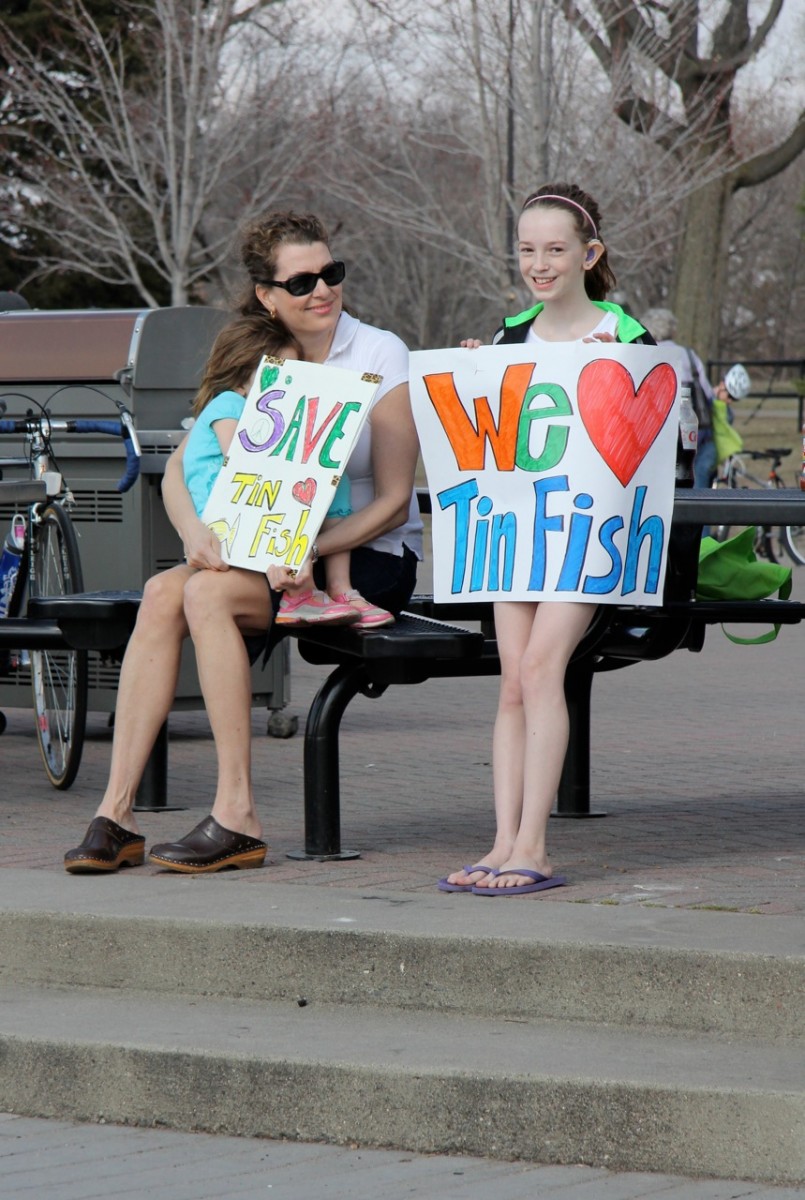 One colorful sign at the Tin Fish Rally is held by Maya L. and admired by Heather Wulfsberg. Heather’s daughter, Bella, is somewhat less interested. All live in the East Calhoun Neighborhood.

Many conversations opened with the question, “What’s happening?” Another frequent opening line was “Can you believe this weather?” The unseasonal 80 degree temperature contributed significantly to the crowd’s size and mellow mood. Television cameras contributed to the drama.

Tin Fish proprietors Sheff and Athena Priest, along with Park Commissioners Anita Tabb and Brad Bourn, were on hand to tell their stories, repeatedly. The narrative had lots of numbers and details but nothing likely to incite a riot. It was essentially a matter of a city agency negotiating a lease with a private vendor. Friction was caused by confusion and delays in the process plus unexpected financial requirements. There was valid concern about agreement being reached in time for the season opening coming up soon thereby jeopardizing whether the Tin Fish would be open for the summer of 2012.

Neighborhood concern focused on the fairness of the contract and the process for both parties – the Park Board acting on behalf of taxpayers and business viability for the entrepreneurs. The Priests received high praise for their vision in presenting the winning proposal in 2004 and persistence in building a highly successful restaurant. Since then two other eateries in city parks have followed the model and been opened: Sea Salt in Minnehaha Park and Bread and Pickles on Lake Harriet.

During the next few days Park Board management and the Priests engaged in negotiations, reached an agreement and on Wednesday, March 21 the lease was approved at the Park Board’s meeting.

That’s the happy ending to a short, true fish story about citizens, entrepreneurs and a government agency working together for a win-win-win outcome.