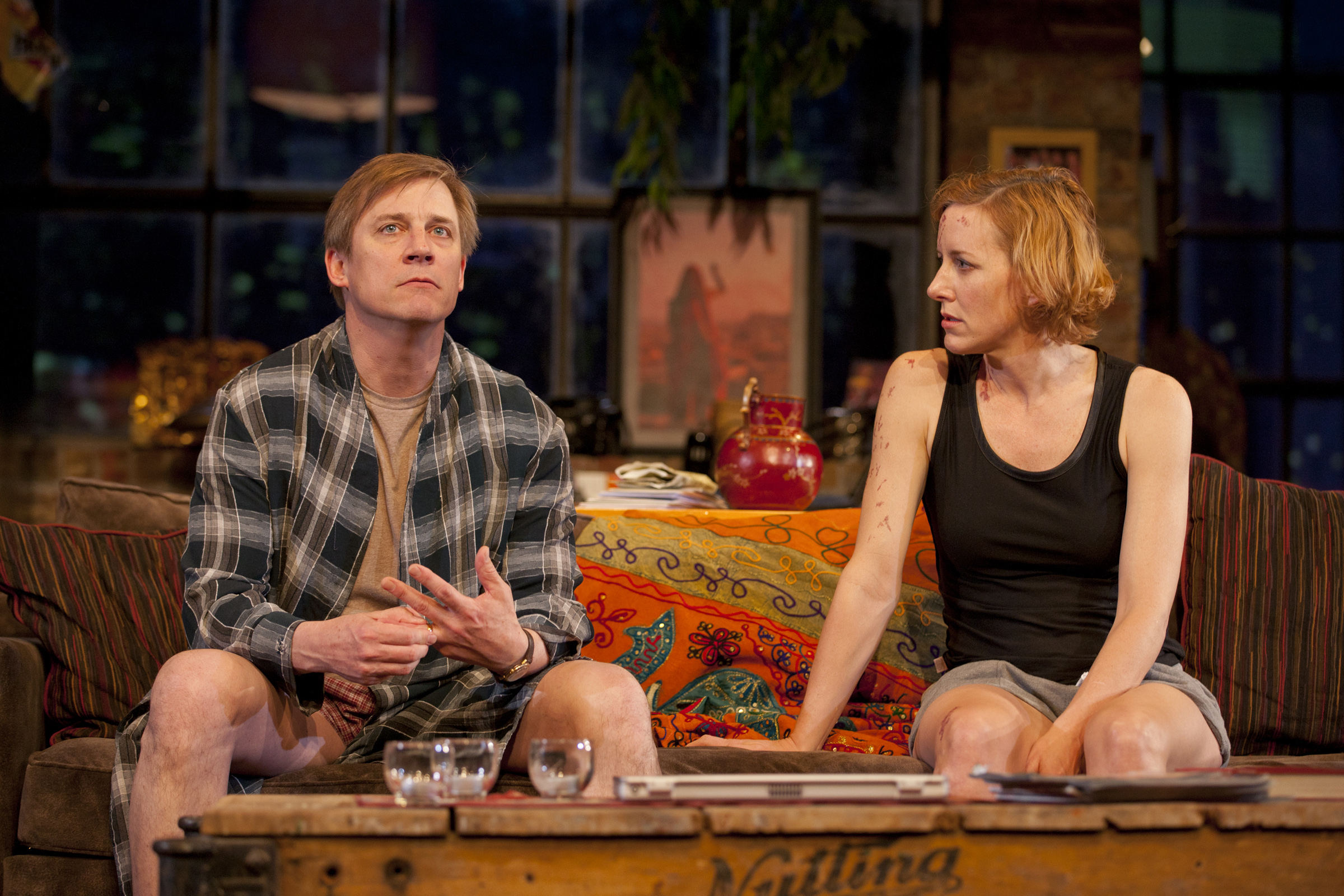 Sitting at the large McGuire Proscenium Stage on Friday night as the cast of Time Stands Still ran through their paces in a New York apartment open to hundreds of onlookers (the audience), I thought of Wallace Shawn’s comment about why he has a hard time enjoying theater. “When I go to the theater, in most cases it sounds like they’re shouting, so I can’t take the characters too seriously.”

The Guthrie’s proscenium stage is a tough space for intimate dramas, even plays like Time Stands Still where the characters are often meant to be shouting. From my seat up in row R, I had a full view of Walt Spangler’s beautiful set (the weather effects created by Tom Mays are especially nice), but it felt like I was seeing the characters at the end of a telescope. The cast are competent, but only Sarah Agnew has enough force and charisma to fill the room.

Agnew plays another Sarah, a photographer who’s just returning from Iraq, where she was almost killed in an explosion. Her professional and personal partner James (Bill McCallum) is a writer who returned from the front weeks earlier after witnessing an especially horrible act of violence and suffering a breakdown. Serving as foils to the 40-something couple are their editor Richard (Mark Benninghofen) and his young new girlfriend Mandy (Valeri Mudek). Over the course of months, Sarah and James need to decide whether to go back to the front or to finally settle into the domestic bliss that Richard and the caffeine-avoiding (hint, hint) Mandy are enjoying.

Donald Margulies’s script is an adequate map to this personal and political territory, but there’s an odd blandness to this script about a couple literally and figuratively scarred by death and destruction. The flat dialogue lacks the spark of Margulies’s marvelously theatrical Shipwrecked! (seen locally in a superb Jungle Theater production in 2009); the best moment is one without dialogue, as tact restrains Sarah and James from commenting on their first meeting with the bubbly Mandy. The dramatic confrontations arrive and unfold pretty much as you’d expect, complete with a quarrel between the couples and moment of sassy comeuppance for Mandy. Maybe I would have been more surprised by the revelation that not all event planners are airheads if I didn’t already know an event planner who co-writes a blog about philosophy.

Director Joe Dowling’s production is like Margulies’s script: there’s nothing really wrong with it, but taking more risks might have sparked the material into life. The scenes end abruptly, giving the sense of paging quickly through a novel that’s failing to engage you but that you have to finish for book club. McCallum plays James as a puppy dog to Angew’s fierce Sarah; it’s a convincing picture of a lopsided relationship, but, maybe in part because of the Friends-like setting, their relationship feels as though it’s come from a sitcom rather than a war.

By contrast, consider another Jungle production: 2008’s Rabbit Hole, with Amy McDonald and Lee Mark Nelson as parents grieving the loss of a child. Horror hung over that production like a damp blanket. A play that more effectively captures the kind of global terror touched upon by Time Stands Still is Shawn’s one-man show The Fever: a visit to a Third World country leaves that play’s narrator in paroxysms of guilt and existential doubt. Margulies’s script plays it safer: its characters, though privileged Americans, are doing dangerous and important work as war correspondents. Though Margulies opens the door to profound questions regarding the meaning of life (and death), his characters never really go there—and neither do we. We’re all stuck in that living room together, and when Sarah says she wants to leave and get back to doing something consequential, we understand all too well what she means.