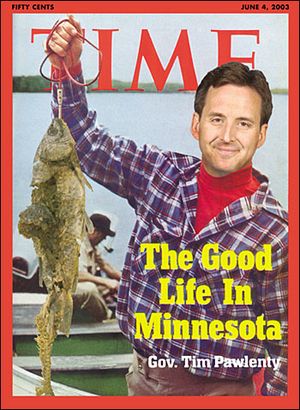 Desperate to change the subject after two disastrous weeks of Waiterloo, the Republican Party trotted out a nuisance report by Minnesota Majority on “felons voting.” In a world of “he said, they said” journalism, the mainstream media dutifully reported the spin; fortunately KARE 11 takes a harder look in Pawlenty: felons may have tipped election:

In reality, that has not been proven. And the actual number of felons who voted illegally will likely be much lower based on reviews from prosecutors who received Minnesota Majority’s lists in the form of spread sheets in February.

“We received about 480 names from Minnesota Majority,” Ramsey County’s lead prosecutor Phil Carruthers told KARE Wednesday, “About 270 were clearly inaccurate and were rejected right from the get-go.”

He said a quick review revealed the names and birthdates didn’t match, or that the felons in question were no longer barred from voting.

“They were ruled out usually because they had the wrong identity of a person,” Carruthers explained, “Or because the person no longer was on probation, and thus their civil rights had been restored.”

There are 30 felons on the group’s list that have been charged with election violations in Ramsey County. But prosecutors had already received those names from the county elections office and the Secretary of State’s office, according to Carruthers.

“We’ve charged about 30 cases so far,” he said, “About half of them were people who were felons who just registered but did not actually vote. Election workers flagged those names before they could vote, but it’s still a felony for a felon to register.”

Those who are being charged with two felonies are felons who registered at the polling place on election day and voted, leaving no time for a cross-check with lists of convicts still on probation.

“We’re going to continue to investigate 180 other complaints but we’re not talking about a huge number of actual cases.  And of that 30 about half of them were registration only, they didn’t actually vote.”

There’s more in the story. Additionally, there’s another concept I first learned while studying historical voter behavior at Penn. One pitfall of weak analysis is the temptation to evoke the “ecological fallacy.”  Wikipedia actually offers a decent enough explanation of the concept, and illustrates it with a recent chapter of electoral legal opinion:

The ecological fallacy was discussed in a court challenge to the Washington gubernatorial election, 2004 in which a number of illegal voters were identified, after the election; their votes were unknown, because the vote was by secret ballot. The challengers argued that illegal votes cast in the election would have followed the voting patterns of the precincts in which they had been cast, and thus adjustments should be made accordingly.[2] An expert witness said this approach was like trying to figure out Ichiro Suzuki‘s batting average by looking at the batting average of the entire Seattle Mariners team since the illegal votes were cast only by males and the overall precinct votes included both males and females. The judge determined that the challengers’ argument was an ecological fallacy, and rejected it.[3]

Pawlenty’s logic is as sound as Minnesota Majority’s data set. Not much.

Image: What the GOP catches when it goes on a fishing expedition.