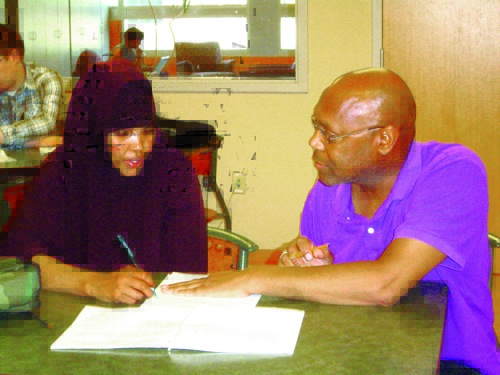 One year ago, Shukri Farah spoke very little English. “I would go to the hospital [and] somebody had to translate for me. My kid’s teacher, I cannot understand her.” Farah is a student in Hope Community’s Saturday Distant Learning program, and over the past year she has not only improved her speaking skills, but now she can also read and write in English.

Unfortunately, a shortage of funds is forcing the classes to end on July 17, leaving the 22 current students and those on a long waiting list without clear prospects for continuing their learning. It is uncertain at this time whether the Minneapolis Public Schools will be willing and able to keep the program alive.

Hope Community is in South Minneapolis, a community that is experiencing significant change like several others across the state because of its growing immigrant population. During the era of welfare reform in the mid-1990s, Hope began to focus on the challenges people faced when trying to get jobs and further their education.

These challenges, ranging from illiteracy to lack of childcare, Hope staff heard repeatedly during a listening project involving approximately 300 people across the Twin Cities that was undertaken before the learning program began 10 years ago. “We knew that we couldn’t address every one of those things,” says Betsy Sohn, organizer and program manager for Hope community. “What we decided was to focus on education for adults in a community setting.”

Under their community education department, Minneapolis Public Schools (MPS) has a group of programs classified as Adult Basic Education (ABE), which include English as a Second Language classes and General Education Diploma (GED) programming. ABE has two programs in partnership with Hope Community: the Saturday Distance Learning program that Hope has facilitated, and a Minnesota Essential Skills for ESL program that meets weekdays and is facilitated by ABE but housed at Hope. The programs are only similar in that they are both for English language learners.

“The beauty of [the Saturday Distance Learning] program is that…it’s for people who don’t have that time during the week and don’t want to give up on learning the language,” says Paul Enestvedt, assistant manager for ABE. While the weekday program uses mainly licensed teachers, the Saturday classes rely heavily on volunteers.

Eight years ago, Astor Green was looking for weekend volunteer opportunities and became a volunteer tutor with the program. “I think it’s such a big deal to help somebody out who may want to read or may want to learn math… I think it’s good to give back and help people out,” he says. The program’s many volunteers are also frustrated that their willingness devote Saturday mornings to helping English and math learners will have no outlet when the program ends.

Volunteers currently work with students who do most of their work during the week outside of class. Homework consists of watching a DVD or VHS tape and working through an accompanying English packet. On Saturday mornings from 9 am until noon, students review their take-home packets either one-on-one with the volunteer tutors or in small groups. There are also computer skills and math components to the program.

Indadeq Soyan went to high school in Somalia, so while basic education is not her challenge, learning the English language is. She is in the process of getting her GED. Once the Saturday Hope program ends, she will have to search for an alternative. Finding one could be difficult.

“It wasn’t until we made the decision to close that we realized that it’s not that there aren’t very many other sites – it’s that there are no other sites,” says Sohn. “That is not an issue that is just for Hope. It’s an issue for the whole city of Minneapolis.”

Kerri Spindler-Ranta, community technology coordinator with Hope, is an AmeriCorps volunteer who has been with the program since October of 2009. She recruits and coordinates just over 20 volunteers who she describes as the cornerstone of the program.

Spindler-Ranta did some research and found that the Franklin Library offers a Saturday afternoon tutoring program where students must register quarterly. There is no set curriculum, however; students choose to work on skills they deem necessary. Besides this option, similar alternatives exist only in Bloomington, Minnetonka and West St. Paul.

“If you don’t have a car or access to transportation and you live in this neighborhood, there really aren’t any alternatives,” Spinder-Ranta says, whose position is essential to the program’s existence and will not be replaced at the end of July.

Diminishing resources is one of the two main reasons that Hope is discontinuing the program. When the program began 10 years ago, the State reimbursement for a contact hour with a student receiving instruction was $9-$10 an hour. Currently it is less than half that amount.

A loss of funding forces all nonprofits to cut where they can, and programs least tied to the organization’s mission, no matter how effective, are the first to go. Sohn says that students who attend classes are coming to learn English as a survival skill, and though Hope began with a mission of crisis response, over the years it has changed to building strong communities. The Saturday Distance Learning program no longer aligns with their mission.

Hope has offered its Saturday model to other organizations whose mission more strongly aligns with education. A few months ago, 15 Minneapolis and St. Paul teachers toured Hope’s facility along with several other sites across the Twin Cities to get an overview of their adult learning programs. Sohn asked how many of them participated in Saturday programming, and their response was that no one works on Saturdays. “So I said that’s why this is such a good day for students to come and learn,” Sohn says.

Leslie Koepke, a professor of family studies at the University of Wisconsin, has been a volunteer tutor with the program for three years. She is disheartened that the program is ending.

“I totally understand particularly the Minneapolis School District of feeling a need to put their resources perhaps with younger learners,” she says. “But…it’s never a good idea to have a situation where children have really more power in the family, and learning English is a powerful skill. And when parents don’t have that skill…their ability to parent is compromised.”

Hope did approach MPS to assume the responsibilities of coordinating the program. At this time, resources have not been allocated in their budget, which will be released in August. Hope is also currently involved in conversations with MPS about providing leadership to the consortium.

“One of the tenets of how Hope views itself is…helping the public services to be accountable to the people who live in the community,” says Enestvedt. “[Hope is asking] ‘How can we get the public agency that’s funded to do this work to come in and do this work?'”

ABE has a Distance Learning Program in their Lake and Hiawatha Adult Education Center, but the class meets afternoons and evenings during the week. What is the possibility of ABE picking up the Saturday class when Hope is forced to drop it?

Enestvedt says it’s a juggling act because adding or expanding one program often means cutting or eliminating others. “The program that we have that we’re running out of our Southside location, as you expand it, it costs more…and you’ve got to be really careful about how you do it.”

“[The] whole concept of how do you serve the nontraditional student or the working adult has to start to change so that students don’t have to try and fit themselves into a form that has worked for traditional institutions for a long time,” says Sohn. “Those institutions [must] become more responsive to the needs of working people.”