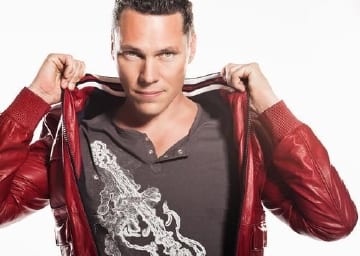 Sometimes, as a journalist, you have to ask uncomfortable questions—but tact restrained me from asking Tiësto whether he considers himself “the world’s #1 DJ” or whether that’s just a label foisted upon him by his publicity team. At any rate, the 40-year-old Dutchman certainly has a credible claim to the title, which was accorded to him by DJ Magazine for three consecutive years from 2002 to 2004. He’s a global celebrity who’s sold millions of records and performed at the opening ceremony of the 2004 Olympic Games. He has over 1.3 million Facebook fans. In short, he’s kind of a big deal…and on October 30th, he’ll be in Minneapolis performing at Epic Nightclub, an intimate venue for an artist who can fill soccer stadiums.

His new album, Kaleidoscope, was created in collaboration with guest vocalists including Nelly Furtado, Tegan and Sara, Jónsi (Sigur Rós), Kele Okereke (TV on the Radio), Emily Haines (Metric), Calvin Harris, and Priscilla Ahn. They’ll all be performing with him at Epic—after a fashion. “I’ve made special videos,” he says. “They’ll be right behind me. It’s a good show.”

You don’t get to be the world’s #1 DJ by creating obscure, experimental music; and true to form, Kaleidoscope is a dance-party sugar rush. Tiësto knows all the tricks of the tables, and he deploys them shamelessly: the teasing snatches of vocal lines, the dot-matrix-printer techno whirs, the volume dips that return in crashing crescendos. And yet, Tiësto sees the record as pushing the envelope. “My audience,” he says, “definitely expects a certain sound, and this is not the record they expected me to make. It’s good to evolve, good to surprise people.”

Tiësto was one of the first DJs to headline big shows as a solo artist, without MCs or other artists onstage. “DJs have much more credibility as artists than we did back in the day,” he says. “We’re not just remixing other artists’ work. Our original music is our own form of entertainment, our own form of art.”

He defends the practice of sampling—”when I use other artists’ music, that’s often good promotion for them”—and while he says he’s always paid for the samples he’s used, he acknowledges that international copyright law is due for an overhaul. “It’s out of control. It’s hard to see who you have to pay.” Still, he declines to take a specific position on the issue, which has become increasingly divisive in the music world. “The whole thing is delicate,” he says. “It’s hard to say how the laws should be reworded.”

While he’s collaborating in virtual form with guest vocalists, don’t expect Tiësto to take up a partner at the tables, a la the Crystal Method or the Chemical Brothers. “It’s hard for me to work with other DJs onstage,” he says. “I always have in mind the way a set is going to go—I’m thinking three or four records ahead. A collaborator pushes you in a different direction, and that’s never worked for me.”

Tiësto is now specifically touring behind Kaleidoscope, but down the line he wants to mix things up—in every respect. “I want my music to be an ongoing process,” he says, “not just album, tour, album, tour. I want to develop my DJ set, make it more eclectic. More collaborations, more remixes. I want to experiment more with sound, take a new direction.”