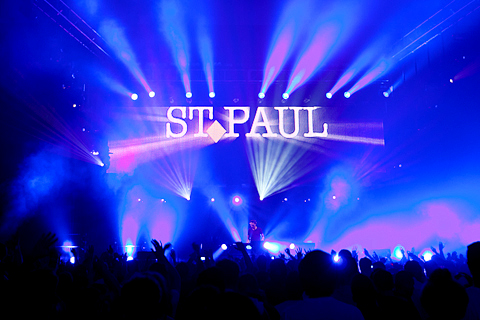 Around the turn of this century, Tiësto was one of the first DJs to demonstrate that it’s now possible to become a music superstar without opening your mouth or playing a conventional instrument—and not just in a behind-the-scenes producer role, but as an attraction in your own right. Though the Dutchman has since been outbuzzed by younger, edgier DJs—his 2009 album Kaleidoscope was greeted by critics with a colossal snicker—the’s still one of the biggest names in the game.

Apparently confident in his drawing power, Tiësto’s bookers bumped the DJ up from Epic, where he last played in Minnesota in 2009, to the Roy Wilkins Auditorium—a venue with 244% of Epic’s capacity—and additionally bumped his ticket prices up by 60%, to a steep $72 for general admission. Unsurprisingly, the reserved seats in the upper deck were sparsely populated, and though the general admission floor was busier, outside the clutch of people pressing towards the stage, the event felt something like a school dance with plenty of room left open for the Holy Spirit.

Pioneer though he is, Tiësto still faces the fundamental challenge of a DJ performing as an artist rather than simply rocking beats to move a crowd: if you’re not singing or playing an instrument, you’re just a dude (or, in a gratifyingly increasing number of cases, dudette) standing up there behind a computer. This problem has been brilliantly solved by Deadmau5 with his animated mouse mask; Tiësto performs sans mask but with a nice pair of (anatomic guns) and a wide grin on his handsome face. This is one DJ you wouldn’t mind bringing home to meet your mother.

(Speaking of Tiësto’s face, this is an appropriate point to disclose that our permission to photograph the performance was granted only under the condition that we allow Tiësto’s management to see and approve any photos prior to publication. The photos you see here were approved; vetoed were close-ups of Tiësto and a photograph of a reveler dancing in a bear costume.)

Whether or not it was worth $72, Tiësto was not stingy with the audio/video—he had two giant screens, and dozens of lights of all descriptions—nor with his time: he took the stage before 10 p.m., and played right up to the venue’s midnight curfew. The couple of thousand attendees partied with admirable spirit, hoisting each other up on shoulders, waving their arms, and bouncing around so sweatily that the auditorium started to smell like the gymnasium to which it’s often compared.

The long set allowed Tiësto the freedom to dig deep and cut wide through his substantial discography. The songs on Kaleidoscope were created in collaboration with an impressively indie lineup of artists including Emily Haines, Jónsi, and Kele Okereke; for the songs Tiësto performed (if that’s the word) from Kaleidoscope, the vocalists were represtented by animations. I’m a huge fan of Tegan and Sara generally—and specifically of the song they created with Tiësto, “Feel It In My Bones”; the spinning digital animation of the Canadian twins was incredible, and the song broke me out of my dispassionate-observer role to dance with (or at least near) the girl in the chicken suit who was dominating the dance floor.

Though I’m sorry I missed seeing Tiësto in a smaller venue, I’m glad to have had the opportunity to see one of the masters at work—and, simultaneously, at play. 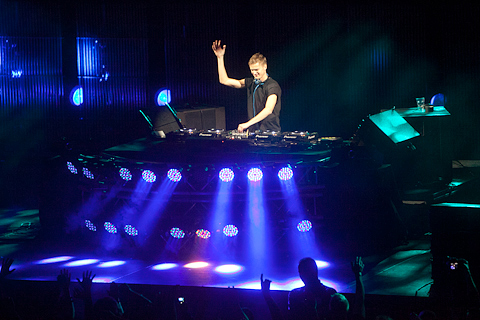 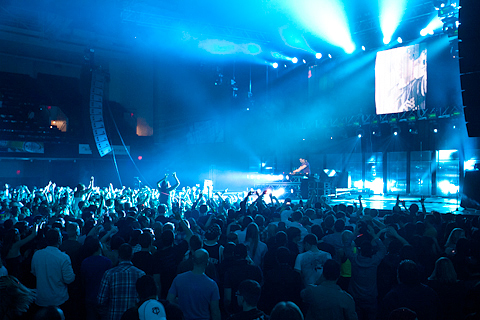 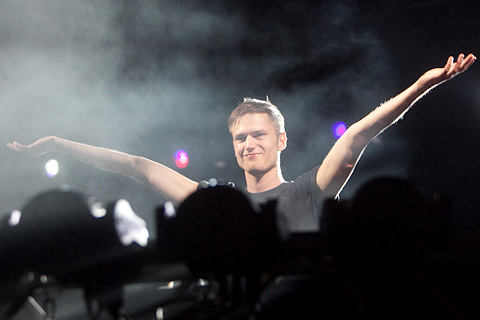 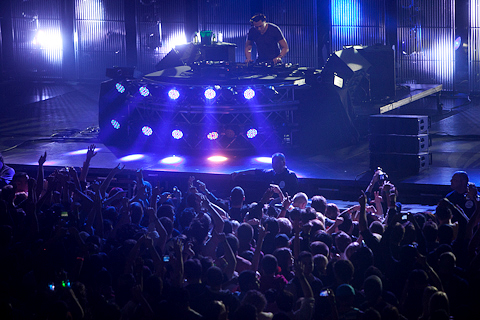 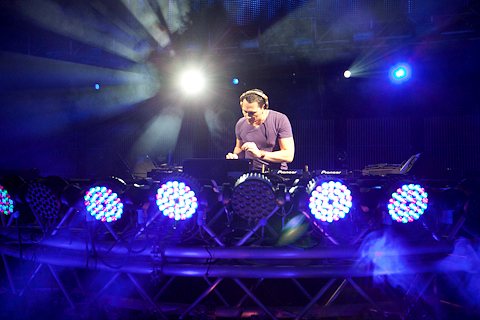 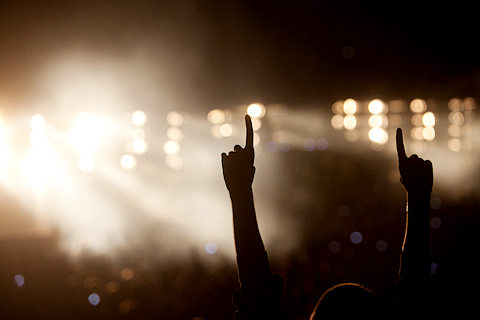 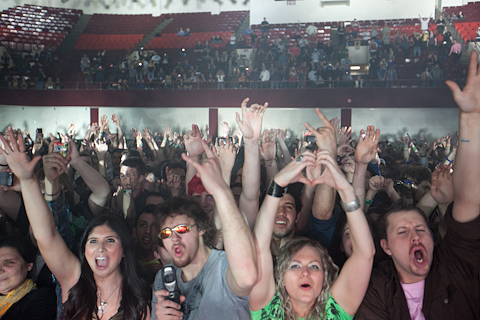 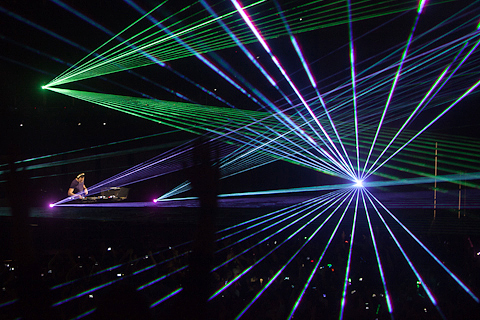 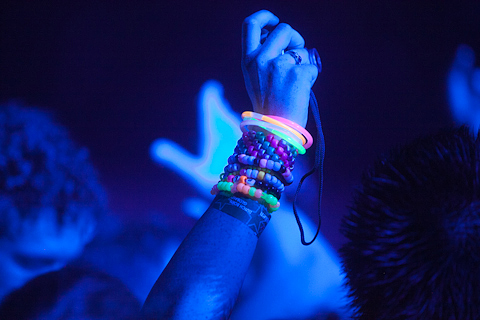 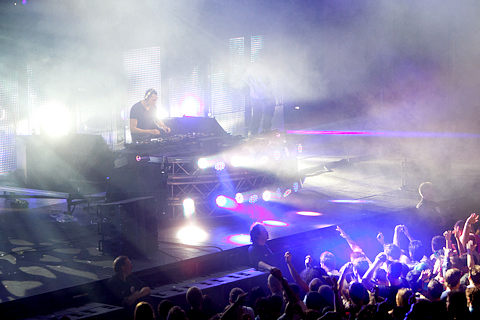 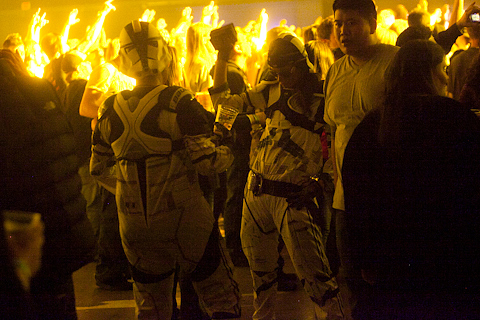 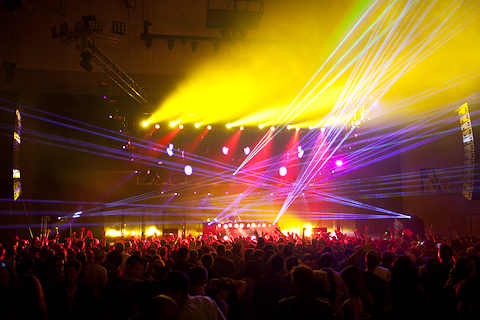 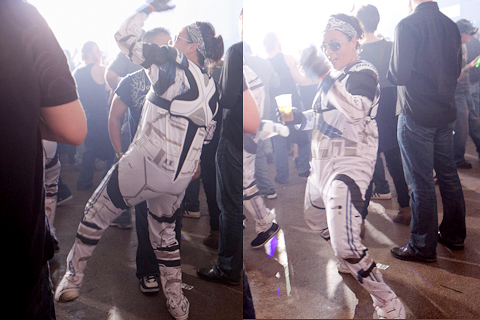 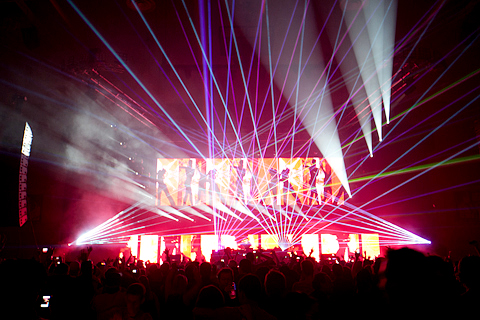 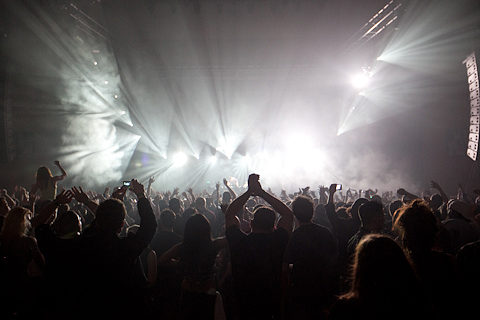 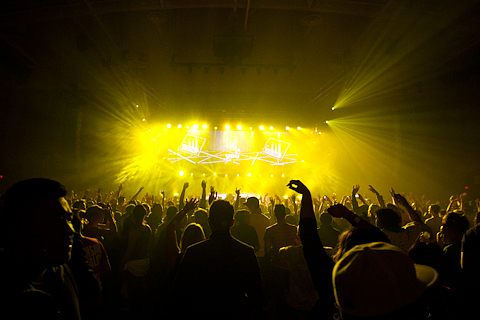 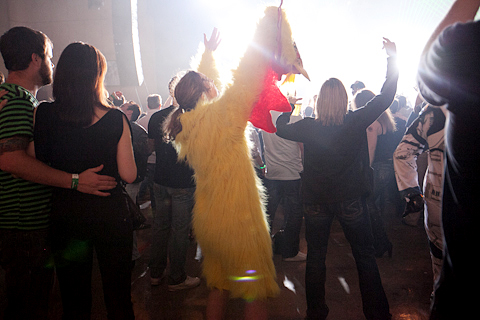