St. Paul schools have been in the newspapers a lot recently. Some buildings have been closed, there are financial problems and numerous discussions of what should be taught and the importance of testing as a way to determine the quality of instruction. So I thought it might be interesting to take a look at what was going on a century or so ago in our neighborhood educational institutions.

I am returning to the St. Paul Daily Globe that is online at the Library of Congress website. I put the key words “Van Buren” in the search engine. For those who don’t already know, Van Buren was one of the local schools that was located at Conway and Maple. The site is now occupied by Dayton’s Bluff Elementary which was formed by a merger of Van Buren and Mounds Park Elementary in the 1970s. I also put in the name “Laura Hand,” since she was often mentioned by old-timers as a much-revered principal of Van Buren. I hope what I found will be interesting and will show how many things have changed and the way that the educational issues of yesteryear are still being discussed.

Unlike today, there was no need to shut down programs in the 1880s and 1890s. A major building boom was occurring and student populations were soaring. Even though additions had been made to several schools, more rooms were needed. The Globe for October 1887 stated that there were 1,200 more students than in the preceding year.

“The crowded condition of affairs” of the Van Buren, Gorman and Cleveland schools “has made it necessary to hold half day sessions” for over a thousand attendees, the paper said. This was proving to create “a great disadvantage to the schools, since it breaks into the regular work of the schools and prevents equal progress in the different buildings.”

Still, there were many success stories in the local area. In January 1888, for example, a Globe article listed a large number of students who had passed “the proper examinations.” People did not automatically enter high school, but had to take specific course work and do well on examinations.

Among the 119 who would be admitted to St. Paul High School-there was only one at the time-were some historically-familiar names from Van Buren: Marie Scheffer, Charles Winquist, Lenora Commick, Edwin Middleton, Fanny Dodd, Rudolph Bate and Fred Craig. Maybe one of you readers could Google up the names and see what might be found about their later lives.

The search did bring up some information about another Van Buren student a few years later. At the end of the school year in 1895, the Globe printed a large article on students from ten of the best schools Those chosen were all in the eighth grade and all were going to “try for the high” as the paper put it, referring to their plans to go to high school.

Here’s who the paper highlighted from Van Buren School. “Among over a thousand pupils and in a class of nine, one of the most promising is Miss Marie Sohns.” She was 15 and had started in a private school, but had been in the neighborhood school for five years. According to the paper, she was “practical and void of foolish romance, so common in young girls.”

Instead, the writer said “she sighs for nothing but quotients, yearns not save for trial divisors, and she dreams but of heroes who can add three columns simultaneously.” Stating the obvious, the paper added: “Briefly, she adores arithmetic. Arithmetical fervor has not paled her rosy cheeks and, it is needless to add, she too is a blue-eyed girl.”

But back to Miss Laura Hand. She was the principal of Sibley School when the head of Van Buren school died in December 1893 and she would take over the helm a few weeks later. Not all welcomed the idea of a woman principal and at least one letter was sent, asking the superintendent to appoint another male. Things turned out all right and it was a position Miss Hand held until her own death in 1917. She was always remembered as a highly successful administrator and educator.

Almost all of the data on Miss Hand in the Globe concerned her duties at the school. However, there were a few scraps of information about her personal life. In May 1894, she was elected second vice-president of the Teachers’ Association at the group’s annual meeting at St. Paul High School. Then in June 1894, it was noted that Miss Laura Hand and Miss Darragh of the teachers’ training school were living at a White Bear cottage until the end of the term when they were expected to take a trip to California.

It looks like today’s concern about school safety is nothing new. The community had its problems around the turn of the century. It was reported in 1896 that St. Paul’s Superintendent of schools had added an officer for special duty at the Van Buren School “to look after a gang of young toughs who have been in the habit of hanging around the building and annoying the young women attending the sessions.” It was apparently not the first time that the “masher element” reared its “ogley” head at Van Buren. Superintendent Gilbert assured people that “the custom will be stamped out if it takes special officers at each school every night during the remainder of the term.”

But problems still popped up now and then. Under the headline “Boys Make War on Janitor,” the September 24, 1903, issue of the Globe covered the struggle over general public use of school playgrounds and an altercation that subsequently arose at Van Buren Elementary School. The school board had seemed to favor the suggestion but had not made any decision and many people had the impression that the new approach had already been implemented.

Laura Hand, the principal, said she feared the injury of her employee “from the boys of the neighborhood, who have caused a great deal of trouble . . . and who deny the right of the janitor to order them away from the school property.”

It was reported that when they were accosting the janitor, a nearby policeman did nothing to stop the altercation. In addition, there were “a letter carrier and some fire men looking on and enjoying the janitors discomfiture, and that some women stood by actually encouraging the boys.” 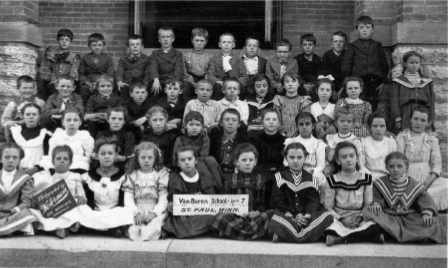 But let’s not end this month’s column on the dark side. The Globe also covered a September 1902 reception at which, as a sub headline put it, “Van Buren Pupils Show Astonishing Collection.” The article informed readers that a large number of visitors were there to see art that now belonged to the school.

“In the lower hall of the school building were exhibited about 200 pictures,” it stated, “including a fine collection of English and French prints, photographs, a few original water colors and some samples of pottery and brass.”

Under the direction of teachers, the pupils gave a number of events to raise money for “the entertainment fund” which was then used to procure the works of art. The actual purchases were made by Miss Hand during some of her summer European trips.

It’s obvious that at the turn of the century the neighborhood school valued art appreciation. It’s hard to argue with the newspaper’s assertion that the reception showed the “results that can be accomplished by wise teachers and interested pupils.”

A few years ago there was a big todo over the curriculum in Minnesota. More than a hundred years ago the same thing was happening. The debate then tells a little about how information about our “founding fathers” were highly valued at one time. The debate was over whether or not enough class time was being given to American history.

Miss Hand was quoted as saying that in the lower grades, from kindergarten up, the nation’s heritage was featured. Stories of Washington and Lincoln “are told and afterward reproduced by the children.” In the third grade stories of men like Hennepin were given, along with general Minnesota history. All the seventh grade was spent on American history and in the eighth English history was the focus. According to her, there had been a vote among the principals on whether or not to take away from the British history and replace it with more about America. They preferred to have things remain the same.

It appears that Van Buren School was serious about its desire to have the students know the story of “the father of our country.” One 1893 issue of the Globe in February-the month of our first president’s birthday-had a headline “Quaint Entertainment in Honor of George Washington at Van Buren.”

It seems that children of the eighth grade were involved in several recitations, essays and songs during the first portion of the program. In addition to portraying George and Martha, a cluster of costumed students “in oldfashioned state” joined in to perform a “stately minuet.” There was mention in the article of a cherry tree.

So there’s another glimpse of Dayton’s Bluff history that can be found in the online issues of the St. Paul Globe. How do you think things compare today? Celebrating Washington’s birthday appears to be gone, having been absorbed into a “President’s Day” holiday. Are there still security issues at our local schools? What are students today learning? What will people a hundred years in the future think of our schools today?

Photographs are courtesy of the Minnesota Historical Society; sketch is from the St. Paul Daily Globe.