Fifty-three “freedom riders” crammed into the lobby of the El Colegio Charter School late Monday night for a bite to eat, exhausted but jubilant after a four-day bus trip to Washington, D.C. to fight for comprehensive immigration reform.

Their homecoming feast was modest – a box of Mexican pastries covered in pink and white icing – but the taste was sweet. By some estimates, more than 200,000 people from across the nation marched on the capitol March 21, demanding access to higher education, a halt to raids and deportations and amnesty for the millions of undocumented workers living in the United States.

“We made a statement that we’re here, we’re alive, and we’re real people who are suffering,” said Uriel Espinoza, vice president of UNITE HERE Local 17. “We’re demanding that they listen to us, and if they don’t, we will keep knocking on the door.”

The riders were a diverse crowd: college students, union workers, immigrants, teachers, activists and high school kids drawn from a dozen organizations across the state, including the Church World Service, Minnesota Immigrant Freedom Network, UFCW and La Raza Student Cultural Center at the University of Minnesota. They all shared a passion for reform. 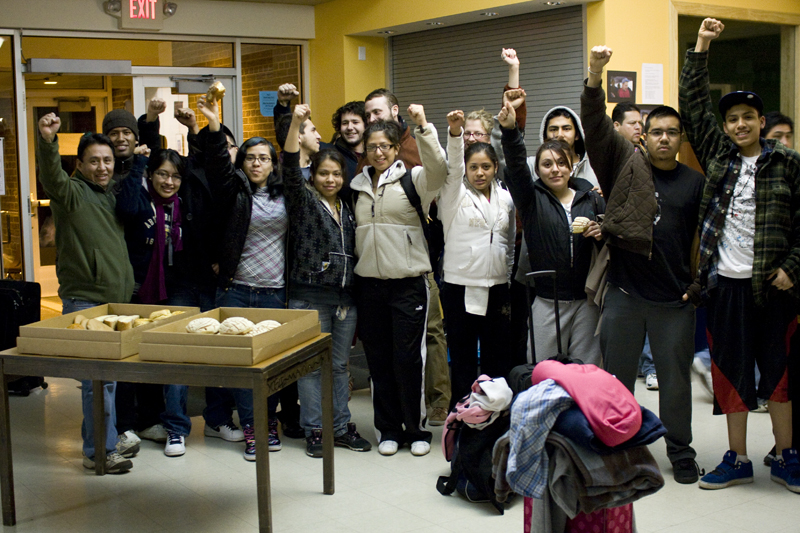 “This is a country of immigrants, but our immigration system is badly broken,” said Terin Mayer, a volunteer at the Immigrant Law Center of Minnesota who helped draft legal protection for the trip. “Diversity is part of our national heritage,” he continued. “It’s part of what makes us who we are. We need to create a system that has workable solutions and moves us forward together.”

The march was a much-needed shot in the arm for the reform effort, said MIFN Executive Director Mariano Espinoza. “For the last ten years the movement has been slipping. The reality is, many people are afraid to do anything because of all the detention and deportation of immigrants. We hear so many stories about people who are afraid to go to the grocery store, they’re afraid to drive their kids to school, because one day they could be stopped.” Sunday’s march was different, though. “I couldn’t see the end or the beginning. It was very powerful.”

For many, the trip was about much more than politics. After four days together, said El Colegio student Gerardo Dominguez, the people on the bus felt like a second family. “It was amazing. It felt like being home. Everybody was fighting for the same thing.”