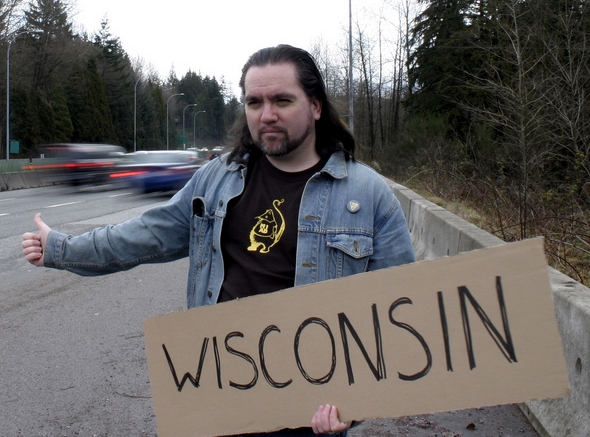 A few decades ago, hitchhiking was something of a rite of passage among American youth. Chip Peterson, who graduated from high school in the 1960s, well remembers hitchhiking’s glory days. In the ’60s and ’70s, Peterson hitchhiked an estimated 100,000 miles across the U.S. and Latin America. He even spent his honeymoon thumbing through Colombia and Venezuela with his new bride. “I can remember times you’d have to line up for a ride,” says Peterson, “because there were so many hitchhikers on the road.”

These days, it’s rare to see one upturned thumb, let alone a handful. “Clearly,” says Peterson, “there’s less hitchhiking now. It has been sensationalized. A couple bad stories resulted in some people being afraid to hitchhike, and more drivers being afraid to pick hitchhikers up.”

Confusion regarding U.S. hitchhiking laws has likely added to hitchhiking’s demise. Despite common beliefs otherwise, hitchhiking is legal in the majority of states. In Minnesota, it’s legal as long as hitchhikers are not standing on roadways. Hitchhikers sticking to shoulders and on-ramps are behaving as law-abiding citizens. “I ended up testifying before the legislature because someone proposing to make it illegal,” says Peterson. “I think perhaps my testimony helped it to stay legal.”

While hitchhiking is much more taboo today than it was 30 years ago, the activity does have one thing going for it: it’s cheap. The point of hitchhiking is to spend zero on transportation costs—so in the present, not-so-cheery economic state, it’s natural to wonder whether hitchhiking might be making a comeback.

There are still many young—and perhaps not so young—people who continue to brave the open road, thumbs up, today.

Tory Roff, 25, is one of these adventurous few. In the past few years, he has traveled many miles at the mercy of strangers. Roff’s first hitchhiking experience was in college, when he traveled from Grand Rapids (Michigan) to Detroit. His most recent trip was last year, when he and his girlfriend thumbed round-trip from Michigan to New York.

Roff claims that for him, hitchhiking has been a refreshing experience. “My last trip proved to me that the majority of people still can be trusted, and proved to others that hitchhiking was alive and safe and fun,” says Roff. “Obviously, you have to exercise precautions, but there’s an overwhelming majority of people out there who want to help. We’re so quick to forget about that kind majority after hearing handful of people with bad stories.”

One of Roff’s scariest hitchhiking experiences was not riding with a sinister driver but rather, with a bad one.

“We don’t have a culture that’s built on those kind of principles. We value security and self-sufficiency rather than community and interdependence.”

“My girlfriend and I ended up riding with an older couple heading towards our destination,” Roff explains. “The driver was 86, and was so crazy behind the wheel. Three different times, he swerved into the left lane, and cars had to swerve to keep from hitting him. We were pretty scared. Finally, I offered to drive. I drove for the next seven hours back to Michigan.”

John Zanetti, 26, is another contemporary hitchhiker. His first trip thumbing was a few years ago, as a college student in Eau Claire, Wisconsin.

“I began hitchhiking because I lacked the disposable income to spend my savings during breaks between semesters,” says Zanetti. “After the first time, I became addicted to the sense of absolute freedom and adventure.”

Zanetti’s first hitchhiking adventure took place in the American Southwest. He flew to Phoenix with a one-way ticket and traveled through Arizona, California and New Mexico. Though he had hope to hitch a ride back to Eau Claire, a lack of time forced him to fly back instead.

“I’ve had so many interesting experiences hitchhiking,” says Zanetti, “but I would have to say that the people and the kindness they have shown me while hitchhiking has stayed with me more than anything else. I once had an elderly couple pick me up in northern Arizona. They spent the entire day showing me unique landmarks and their favorite spots. I still occasionally hear from them. They were really special.”

Though Roth and Zanetti are strong advocates of safe, wise, hitchhiking, neither think their attitudes toward it will catch fire in America.

“To be honest, I don’t believe hitchhiking is coming back,” says Zanetti. “I think the combination of hitchhiking horror stories fueled by movies and nervous parents and the relative ease of cross-country travel have made it a less appealing alternative.”

“People tend to be fascinated by the fact that I hitchhike, but I can’t see it returning to mainstream,” says Roth, who didn’t meet any fellow hitchhikers on the road. “We don’t have a culture that’s built on those kind of principles. We value security and self-sufficiency rather than community and interdependence.”

Wrapped in a blanket of security, people may stay safe. However, judging from Peterson, Zanetti, and Roth’s experience, they may also be passing up rich learning and cultural experiences.

“I feel like [hitchhiking] helps me feel the pulse of the country,” says Peterson. “And it does. A lot of what I learned about the world, I learned through hitchhiking.”

Colleen Callahan (colleenmcallahan@gmail.com) is a graduate student at the University of Minnesota’s School of Journalism and Mass Communication, and a freelance writer.