2300: Back of funeral home parking lot and four 1890’s houses, all rooming houses. The two at the far end are the ones to be demolished. (Photos by Trilby Busch)

Bisected by high-traffic streets, Lowry Hill East is divided into three sections by zoning designations: the area south of 28th Street, the large section between 24th and 28th Streets, and the apex north of 24th. Each of these sections has a distinctive character and its own set of concerns. While there is no way to distinguish between the demographics of each section, looking at the Wedge as a whole in comparison to the greater city sheds some light on a major issue facing the neighborhood currently and in the future: redevelopment of the Wedge apex north of 24th Street. 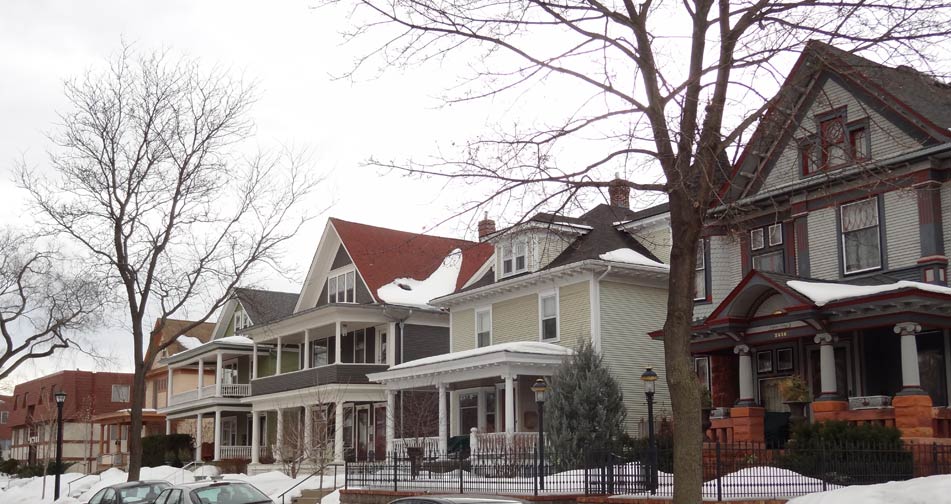 Those are the demographics of the Wedge as a whole as of 2010. While we don’t know demographic differences in the three Wedge sections, we can look at what distinguishes them physically. The southernmost section is currently undergoing significant changes. Formerly an industrial corridor along railroad tracks, the area south of 28th Street is being transformed into a high-density residential area of apartments, condos, and townhouses. The total number of new units under construction (839) and already built (1,061) south of 28th Street is 1,890. Assuming that each unit will house 1.5 residents (the current Wedge average), these nearly 2,800 new residents will swell the current population of the Wedge by 47%, and constitute about one third of the total population.

The interior of the big section between 24th and 28th Streets is largely comprised of pre-World War I houses and apartment buildings, with two-and-a-half-story walkup apartment buildings scattered among them. After its 1970’s downzoning to lower density, the Wedge middle has remained the most stable area, with the vast majority of residential buildings being occupied as they were thirty years ago. This section is home to most of the residents who have lived in the Wedge the longest. It has the most duplexes and single-family houses. This section, however, is cut in two by a major traffic artery (26th Street), and of the 28 blocks here only 12 whole blocks are zoned R2B.

The northernmost section, the apex north of 24th Street, is the smallest. In the first half of the 20th century, large houses, a school, and a church occupied this area. Some of the houses were used as student housing for this school and for the Dunwoody Institute. After the middle section was downzoned, high-density zoning remained in place for the Wedge apex. This writer’s count of the structures located in the area between 24th and Franklin revealed the following distribution: 5 pre-WWII apartment buildings; 19 post-WWII apartment buildings; 14 houses with 4 or more residential units; 60 houses with 3 or fewer units. Today a half-dozen single-family homes north of 24th Street are in R2B zoning, but the remainder is zoned for commercial or high density residential.

Because of this high-density zoning, the apex is slated to be the next area facing big changes. Mayor Rybak and the City Planning Department have targeted the Wedge, Whittier, and other neighborhoods to the east for more high-density residential development. When the available space along Greenway is filled, developers’ attention will turn to the Wedge apex. A hint of what’s to come is the current proposal by the Lander Group to demolish the houses at 2316 and 2320 Colfax and replace them with a four-story apartment building. It’s only a matter of time that other redevelopment proposals will be offered to replace houses in the R6 part of the apex. If a proposed building conforms to R6 zoning, which allows for buildings as high as five stories, it can go in without neighborhood approval. 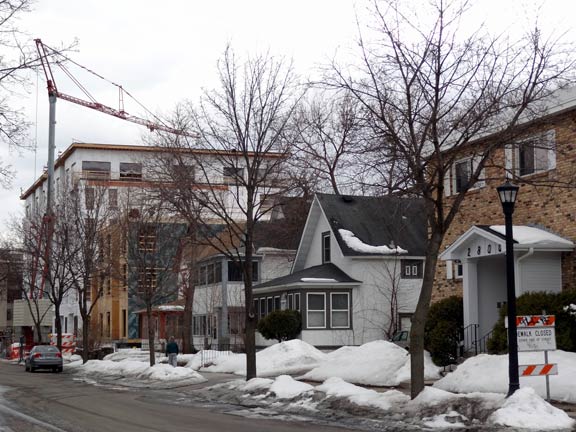 The Wedge population has already seen a shift away from the number of families with children and a shift toward a greater proportion of young renters. In the coming months and years, Wedge residents will have to decide if they prefer new apartment buildings that offer many more units or if they’d rather have the 74 turn-of-the-century houses (two fewer if the Lander project is built) lining the streets of the apex.

In 2011 Council Member Meg Tuthill requested that Community Planning and Economic Development (CPED) staff put on their work plan a review of LHENA’s 2004 Zoning Study. This was proposed to preserve the mixed scale and diverse character of the neighborhood.

With the high proportion of Wedge residents being renters and a high year-to-year turnover, it’s apparent that only a small percentage of residents are involved in LHENA and neighborhood events.

No matter what your opinion is on future development in Lowry Hill East (Wedge), I recommend you make your voice heard. Otherwise those decisions will be made without you.

Trilby Busch is affiliated with the Healy Project, a group dedicated to preserving the architectural legacy of Minneapolis master builder T. P. Healy. (which is currently working on incorporating as a nonprofit.) She wrote the initial 1983 article on Healy, “Legacy of a Master Builder” for Twin Cities magazine. She’s retired from teaching college English, has lived in the same 1885 Wedge house since 1976, and was Wedge editor in the ‘80s.