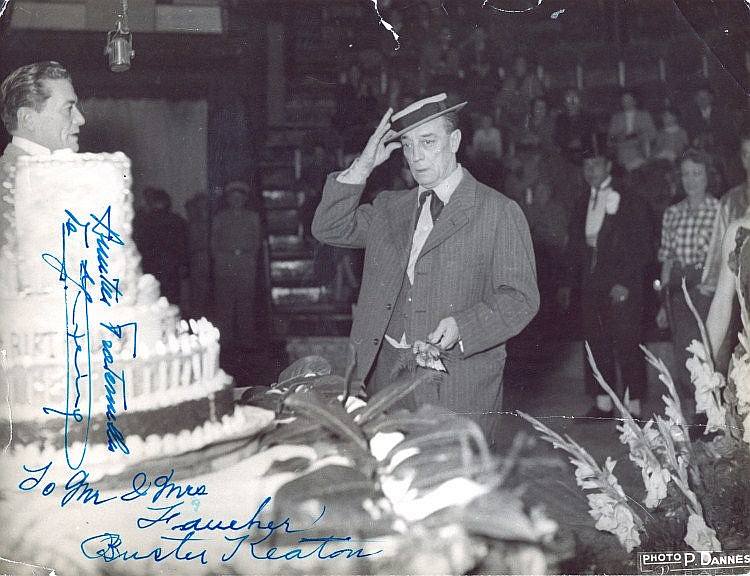 If the late, great comedy star Buster Keaton were still alive, he’d be turning a very distinguished 119 years old on October 4, 2014. In the photo above, he’s shown celebrating his birthday at the Cirque Medrano in Paris. Besides busting out some birthday cake, here are three ways to celebrate Keaton’s birthday in October, both in the Twin Cities and further afield. Be sure to see the end of this blog post for a note about a giveaway of the book Buster Keaton Interviews, published by the University Press of Mississippi.

1. The splashiest way to fete Keaton this October? Attend the 20th Annual Buster Keaton Convention in Muskegon, Michigan the weekend of October 2-4, 2014. The annual get-together is sponsored by the Damfinos, the International Buster Keaton Society, and it takes place near Bluffton, Michigan, the scenic resort town where Keaton spent some of the happiest days of his life as a young boy.

This year’s convention includes a walking tour of sites around Muskegon and Bluffton connected to Keaton’s time there, talks by a variety of silent film scholars (including silent film locations sleuth John Bengtson) and people who knew Buster Keaton personally. There will also be showings of Keaton films with live musical accompaniment and plenty of chances to chat with people who love all things Buster.

If that isn’t enough to make you shout “Road trip!”, this year’s convention will also feature what looks like one of the biggest silent-movie discoveries in recent memory–a one-time-only display of never-before-published photographs from the filming of Keaton’s masterpiece The General, as well as the only known script for The General with handwritten notes from writer Clyde Bruckman and Keaton himself.

Much of the material was discovered by Susan Buhrman (then president of the Damfinos) on, of all places, Craigslist. According to a Damfinos press release, while The General was being filmed on location in Cottage Grove, Oregon in the summer of 1926, a local photographer was allowed to take behind-the-scenes photos during the movie’s production. The photographer’s collection of photos and nitrate negatives had been stowed in a closet until it was recently uncovered by one of the photographer’s descendants and listed for sale.

The Damfinos snapped up the treasure trove of material and are now planning a book featuring the finds. But if you want to be among the first to see these discoveries in person, you’ve got to head to the convention. There’s still time to register as of late September, but if you wait too long to sign up, you may miss out on the boxed dinner on Thursday, October 2 or the banquet on Saturday, October 4.

I’m not going to make it to Muskegon this year, but I have a tentative commitment from Damfinos co-founder and current president Patricia Eliot Tobias to give me a convention recap once she’s caught her breath after the festivities in Michigan. I hope to run an interview with her about the convention and the new discoveries in another blog post in October.

You can find out more details about the convention, including registration fees, lodging, and event schedules, at http://www.busterkeaton.com/2014/

2. If you’re staying put in the Twin Cities in October, you can celebrate Buster’s birthday by attending a movie showing a little closer to home.

On Friday, October 17 at 2 pm, the Hamline Midway Public Library will host a kid-friendly matinee of two Keaton shorts, One Week and Neighbors, with live musical accompaniment by Dreamland Faces (full disclosure–along with that library’s great librarians and the Hamline Midway Library Association, I’m one of the organizers of this event). The event is free and will feature hot popcorn and cider. The library is located at 1558 W. Minnehaha Avenue in St. Paul, close to the 67 and 84 bus lines and the Green Line, with ample on-street parking.

3. And if neither of those options works for you, you can always just stay home and curl up with a Keaton film or one of several great books about him, many of which are available in the Minneapolis and St. Paul library systems.

Here are a few of my favorites:

Thanks to my friend Steve Yates at the University Press of Mississippi, I have a copy of Buster Keaton Interviews to give away to one Silent Twin Cities reader. All you have to do is comment on this blog post with the name of your favorite Buster Keaton film (no penalty if you can’t narrow it down to just one film!). I’ll award a copy of the book to one randomly chosen commenter a week after this blog post first appears, and then I’ll get in touch with the lucky winner to figure out how to ship him or her the book. Good luck, and may the most avid Buster fan win!