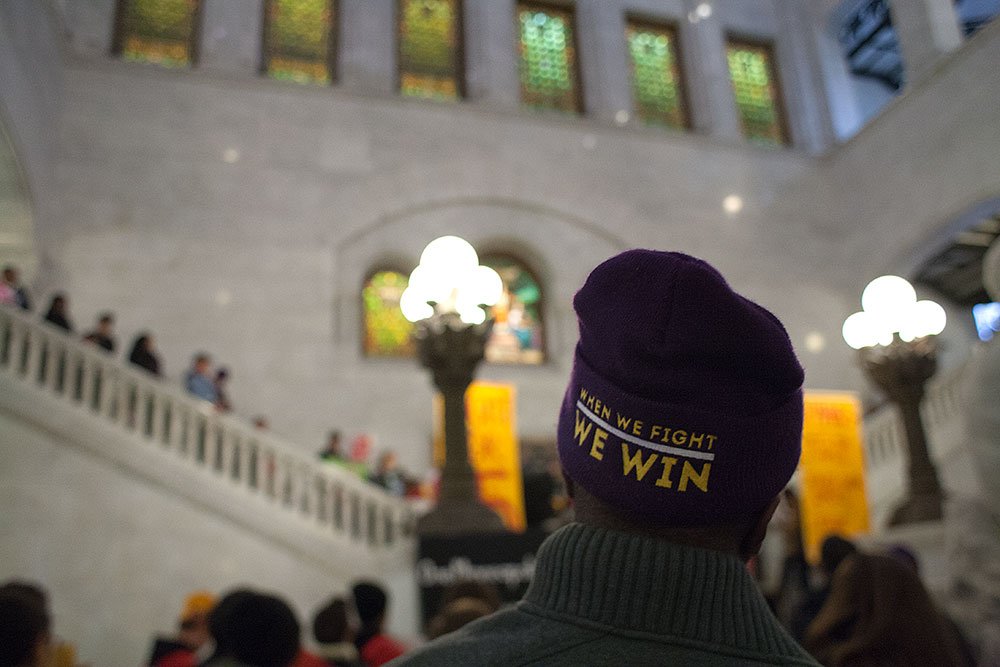 The slogan, "When We Fight, We Win" was one of many rally cries during a demonstration in Minneapolis City Hall, Tuesday, Nov. 10, 2015, for striking retail and fast-food workers. Photo by David Pierini.

The recession might be over, but not for Black Minnesotans. In 2014, the incomes of Black Minnesotans were the lowest they had been since 2008. With the average salary for Black Minnesotans at $27,000 per year, the rate is nothing compared to Minnesota’s average income for all residents at nearly $68,000 annually, said the Minnesota State Demographer Susan Brower who recently presented at the Legislative Working Group on Economic Disparities.

And according to a memo by Sen. Bobby Joe Champion at that same working group, about 9 percent of Black students and almost 11 percent of Latino students dropped out of Minnesota high schools last year. Further, almost 24,000 Black adults in Minnesota have not earned a high school diploma or equivalence.

Even though these statistics have persisted in some form for years, they finally have the attention of the Minnesota Legislature. In an effort to decrease these and others of Minnesota’s startling racial and economic disparities, the state legislature has introduced several proposals that they hope might be a first step towards equity for all Minnesotans.

Gov. Mark Dayton and some legislators had wanted to act on these disparities during a proposed special session. Shortly after Jamar Clark was shot by police in North Minneapolis in November, and the series of protests which followed, Dayton began making the push for the special session that would, at least in part, begin to address economic disparities suffered by Black Minnesotans after calls for change came from groups like the NAACP and Black Lives Matter.

“I support more immediate measures to close economic gaps which include proposals in Sen. Champion’s package; funding for a Human Rights office in St. Cloud, and an audit to assess the state’s employment, contracting and workforce enforcement practices. I maintain that at least $15 million should be invested to improve economic outcomes in communities of color in a special session,” Dayton said in a Feb. 1 letter to the Speaker of the House, Rep. Kurt Daudt.

However, during a Feb. 2 press conference, Dayton announced that no political agreement between GOP legislators, DFL legislators, and the governor himself could be had and a special session would not happen.

Proponents for closing Minnesota’s racial disparities have offered three separate proposals for the coming session. The first would require a disparity impact analysis to be conducted on specific proposed legislation. Authored by Minority Leader Rep. Paul Thissen and Deputy Majority Leader Sen. Jeff Hayden (both of whom represent Minneapolis districts), the bills are known as HF 2198 in the state House of Representatives and, in the state Senate, SF 2054. Both the House and Senate versions of this disparity impact analysis bills were introduced during last year’s legislative session, but did not leave committee.

Also proposed is Sen. Bobby Joe Champion and Rep. Linda Slocum’s Minority Business Grant Appropriation bill, which would set aside funds specifically for use by minority-owned small businesses. And during the Legislative Working Group on Economic Disparities, an education-based tax credit for low-income Minnesotans was proposed by Rep. Jim Knoblach and House Republicans.

“I think far too often we do things without thinking about the unintended consequences of the decisions that we make,” Champion said.

According to the House version text, the bill would require that legislation consider the impact of its decision-making and policy creation on Minnesota’s minority communities. This decision would be made at the discretion of either a committee chair or ranking minority member.

“This is a data-driven way of looking at the policies we introduce that impact communities of color,” said Hayden. The bill is meant to advise legislators on the impact of the work they do. It is also meant to educate voters and allow state government to understand the causes and foundations for disparities faced by Minnesota communities.

Determining “disparate impact” is defined in the federal Fair Housing Act as a qualitative measurement–or comparison–of discrimination in a legislative policy against any specific group.

Hayden said that the disparity impact notes would not necessarily change the outcomes of a specific proposal, but they would increase legislative and voter awareness of the impacts of specific bills. The proposal would also hold legislators accountable to Minnesota’s most disenfranchised communities, including low-income Minnesotans and Black Minnesotans.

“This works the same way we consider local impact. If we do this, what is the impact on our local municipalities or local government? Or what would be the fiscal impact?” Champion said.

“The idea of disparate impact needs to be a part of every proposal analysis. Whenever somebody is doing a feasibility study for implementation or even for cost in legislative analysis, there needs to be a question of disparate impact,” Marcus Mills said. Mills is the Organizing Coordinator for Community Power, a community coalition focused on developing energy equity and sustainability in Minneapolis.

According to Anthony Newby, Executive Director of Neighborhoods Organizing for Change, however, the disparity impact note has to do more than measure.

“It is a useful tool. But we need quick and deliberate action. We do not need data that confirms what we already know,“ Newby said.

Newby said that Neighborhoods Organizing for Change is prioritizing an equity and jobs bills which would focus on things like protecting workers from wage theft, more teacher of color trainings, and ending contracts with for-profit prison contractors. Newby also said that they are focusing on specific state-level executive actions like the creation of a racial impact taskforce, which might be one way to implement the results of the disparity impact note.

Disparity impact notes are not new to state governments. For example, the Massachusetts Commonwealth analyzes racial and ethnic disparities in all proposed health legislation with the goal of eliminating health disparities in the state.

While the likelihood of the bills promoting the disparate impact note passing are low, Hayden believes that he and other state legislators should still fight for these proposals and draw attention to these issues. Champion noted that with a Republican-led house, it would be difficult to get any of the proposals meant to decrease disparities passed, but voter engagement in the upcoming election could turn that around.

“Is there a high probability of them passing? No. Is that disappointing to me? Yes. How should we as citizens of this good state of Minnesota look at it? We should be appalled that others take the sort of the positions they do and continue to play games with the lives of everyday citizens that we want to move forward. And that should be unconscionable,” Champion said.

Champion is also the author of a bill which would appropriate funds for businesses owned by minority business owners.

“If you’re a white person, a member of the majority, you’re living the life,” Champion said.  He said that it is important to give Black Minnesotans support to move from poverty into prosperity.

Champion is the author of SF 2005. Thissen and Slocum are the authors of its House companion, HF 2168. The bills were introduced during the 2015 legislative session.

“The common denominator to every disparity is poverty,” Champion said. Champion argues that it is vital that the state legislature invest in Black adults, because to get adults out of poverty is to get communities out of poverty. This is why, he says, investing in minority-owned businesses is necessary.

According to the Small Business Association, small businesses provide 55 percent of all jobs and 66 percent of all net new jobs since the 1970s, and minority firms are more likely to hire minorities.

Newby said that minority-owned business support and incubation is something that Neighborhoods Organizing for Change will also actively support this legislative session.

According to a press release from the working group’s co-chair Rep. Jim Knoblach (R-St. Cloud), this proposal is championed by Republicans who believe it would help bring educational opportunities to low-income residents. They are proposing that the tax credit be increased to $3,500 per student.

The education-based tax credit is meant to open up educational opportunities to the children of disadvantaged families. Aside from the increased tax credit per student, the proposed expansion would cover private school tuition expenditures.

The proposal has been met with resistance, however.

“If you just look at the proposed special session and what my Republican colleague put on the table which is school choice, how does that connect to the adults who do need intervention and opportunity right now today?” said Champion.

It was this education-based tax credit, among other issues including unemployment support for businesses that kept DFL and GOP legislators from agreeing on a special session.

“Republicans are solely responsible for our failure to come together and take those necessary steps to provide that assistance,” Dayton said.

According to Champion, Minnesotans can expect many other proposals this session aimed at ending Minnesota’s racial and economic disparities. He also stressed that all legislators take leadership in ending these disparities.

The state Legislature convenes its next session on March 8.

This piece is the first of two stories. The next story in this series will focus on the impact, sustainability, likelihood and feasibility of the legislative proposals discussed above.