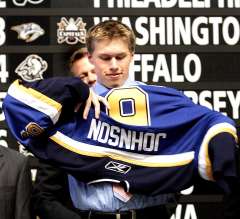 Erik Johnson puts on a St. Louis Blues jersey after being selected with the first pick of the 2006 NHL Entry Draft.

Another chapter was written Saturday in the long and storied tradition of Minnesota’s men’s hockey team. But it wasn’t done anywhere near Mariucci Arena.

It was added in Vancouver, British Columbia, where three players on the Gophers’ 2006-2007 roster were selected in the first seven picks of the 2006 NHL Entry Draft.

“That’s awesome,” Johnson said in a telephone interview the day after the draft. “It was just a great day for American hockey and Minnesota hockey all around.”

The three current 2006-2007 roster members who went in the top seven Saturday all took different paths to their draft placement.

Johnson had been the top-ranked North American skater since the NHL Central Scouting midterm rankings came out in January and was pegged by many in the weeks leading up to the draft to be the top pick.

Although he said he had a pretty good feeling he’d be taken No. 1 overall, he still wasn’t sure in the days before the draft.

“It’s obviously a pretty big accomplishment,” Johnson, the first Minnesota-born player to be taken No. 1 overall. “I was really excited to be picked No. 1 and just (be) selected at all.”

Johnson said his top-pick status hasn’t sunk in yet.

Kessel, meanwhile, dropped from second among North American skaters in Central Scouting’s midterm rankings in January to fifth in the final rankings in April.

He also had to deal with claims that his parents were too involved in his career and he performed poorly on fitness tests at the recent draft combine. Kessel did not return repeated phone calls asking for comment.

But the man who drafted him, Bruins interim General Manager Jeff Gorton, said

Kessel perhaps was the most talented player in the draft and that the team had no concerns with any of his supposed issues.

“We’ve had a few meetings with Phil, and we did our homework,” Gorton said. “We’ve talked to a lot of people that have been around him … we’re completely comfortable in Phil, and we think we can help him develop as a player and a person.”

Okposo’s route was slightly different, as he jumped from 13th to 11th among North American skaters from the midterm to final rankings.

His stock continued to rise after the final Central Scouting rankings were released, as a result of his strong showing in the United States Hockey League playoffs.

Neither Okposo nor anyone from the Islanders was available for comment.

Now that the three have been selected, talk shifts to whether they will suit up for the Gophers this fall.

Johnson said he’s undecided, but said Blues General Manager Larry Pleau will head to Minneapolis sometime in the next few weeks to meet with him and his family to discuss his future.

“I think we want to do what’s right for him and what he feels is right for him,” Pleau said. “And, again, we’ll do that at the proper time.”

As for Kessel, Gorton said a decision has not been made, either by the organization or Kessel himself.

Gorton said the Bruins will speak with Kessel and his family in the coming week about his future.

“We’re exploring every kind of option there is,” Gorton said.

Okposo is not expected to jump ship before playing for Minnesota, as coach Don Lucia said he thinks Johnson and Kessel are “the only two that are in question right now.”

Lucia said he hadn’t spoken to anyone since the draft and didn’t know what their plans were but that he probably would have a better idea in the next couple of weeks.

As for the possibility of losing Johnson and Kessel, Lucia said he wasn’t nervous.

“You know what? There’s nothing you can do about it,” he said. “It’ll probably depend on what the NHL teams want to do with them.”

In the event one or both players leave, Lucia said there is a back-up plan that will still give the team 14 forwards and eight defensemen next season.

Fischer also goes in first
Incoming freshman defenseman David Fischer was another member of the 2006-2007 roster to be selected in the first round.

“You think about what team you want to get drafted by, you think about the premier team of the NHL and automatically the Canadiens come to mind,” Fischer said.

But, unlike the other high draft picks connected to the 2006-2007 team, Fischer said there’s no doubt with regard to his plans.

He’s planning on wearing the maroon and gold “for a couple years at least,” Fischer said.