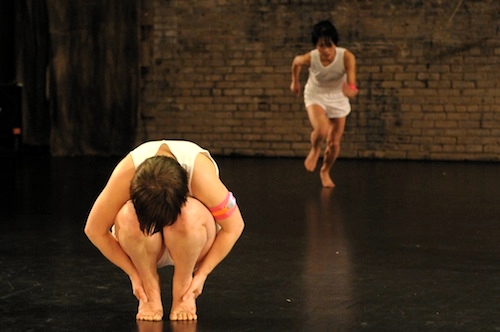 It is very rare that a performance piece of any kind causes to me to scribble notes in the margins of my program afterward out of desperation not to forget any of the plethora of amazing images and ideas. The BodyCartography Project‘s ½ Life, which I recently saw at the Southern before it headed to PS 122 in New York, was that kind of piece.

½ Life communicated to the audience many specific and well-illustrated concepts regarding the threat and effect of a nuclear holocaust, and it did so without feeling intellectual—instead, resonating on the deepest level. The dancers held us in frozen rapture for the entire duration of the performance and quietly found their way into our very bones. The result was such that the provocations offered came from within us, as though each movement occurring on the stage was simultaneously occurring within our souls. The experience was that of absolute connectedness, a kind of symbiosis of the performer and the spectator. Because the performance was not overtly political, instead focusing on the human condition, it served to communicate the need for a nuclear-free world more effectively by offering us many facets surrounding this complex issue.

The BodyCartography Project has been developing the physical, visual, and aural material used in ½ Life since 2005 through site-specific explorations around the Pacific—specifically Japan, New Zealand, and the west coast of the United States. The locations included abandoned World War II military bunkers, and in one instance a gas weapons factory in the Seto Sea where many people were poisoned manufacturing weapons during WWII. Each image offered to the audience, no matter how simple, was richly laden with these years of research. So thorough were they in making the truest of discoveries that the choice of imagery felt nothing else but exactly right, natural. By reclaiming these spaces, and sharing the work created with people elsewhere, these artists are creating new life out of death and ash.

In terms of the actual content of the performance, the dancers take us on an incredible emotional journey through starkly contrasting heights and depths. The very first image is one of a solitary figure approaching a barren landscape. It so adequately represented the kind of profound loneliness of being “the last one,” or “the only one.” On another level, it was also possible to experience the lonely journey of the creator approaching the huge subject matter of the nuclear world. Two others then join the first figure, and the three go through a sequence where they shift direction together many times as a disconnected but singular body. As a physical theater artist, I can say that the kind of listening required to execute those shifts so fluidly requires a truly advanced skill. Watching this scene gave a real sense of nuclear winter, a cold sleep. I feel this understanding of how to create that environment on stage could only have come from people who live in a place where they must experience such extreme darkness and cold for extended periods of time. Not that Minnesota winter is remotely the same thing as a nuclear winter, but I saw a connection in the dynamic of what these two kinds of “seasons” do to the body and to the land. It is the site-specific artist who is able to listen to the voice of his or her surroundings so openly and then relate the story being told to the rest of us.

A soon-to-follow sequence in which the dancers wore simple white cotton underclothes and pink arm bands with lights attached to them gave a feeling of medical deformity and the larger deformity of our humanity. There was a movement image sequence where at different times Olive Beiringa and Takemi Kitamura were seated on the floor, legs splayed out in front of them and tormented by involuntary spasms. They appeared so innocent and small they could have been the children born into a nuclear holocaust. I thought of children helplessly born with deformities already in our world because of our environmental activities and warfare.

This was about the point that I thought I couldn’t possibly take anymore. If this is what our world is, I can’t bear to live in it. Then something amazing happened. Takemi Kitamura approached a small circle of light cast from directly above the middle of the stage. Her body was filled with a quiet bravery. She proceeded to perform a dance that originated in her hands but affected everything the entire room. It was frantic, but delicate. Hands are often symbolic of creativity since we use our hands to craft things. As her frenetic energy grew, so did her desire to get something out, to say something. That’s the point when I remembered why I wanted to live: that the human spirit is stronger than anything. No matter how bad things get, that will never change, we will endure. Later, as Olive Beiringa washed her body from a pan of water inside a moving cube covered in plastic, it washed me clean too.

I attended ½ Life the last night it played at the Southern. There was a closing night dance party on the stage afterward with music by DJ Wes Winship. Though the music was fantastic and I knew many people there from the December 2009 Choreographer’s Evening (curated by BodyCartography) and the weekly Embodied Aerobics workshops they had been running for the following couple of months, both of which I was involved with, I found it incredibly difficult to move my body in any sort of celebratory way. I felt I had just been through a huge ordeal. I felt internal, reflective. If anything, I wanted to crawl up and through the atmosphere of that room that was filled with such a lasting charge. I felt somehow a changed person, and I spent such a relatively short amount of time with these artists. The BodyCartography Project is a group with a rare and wonderfully powerful gift to offer us. Let us sit up and take notice, Minnesota performing artists and spectators, of where work can go when we make the effort together.