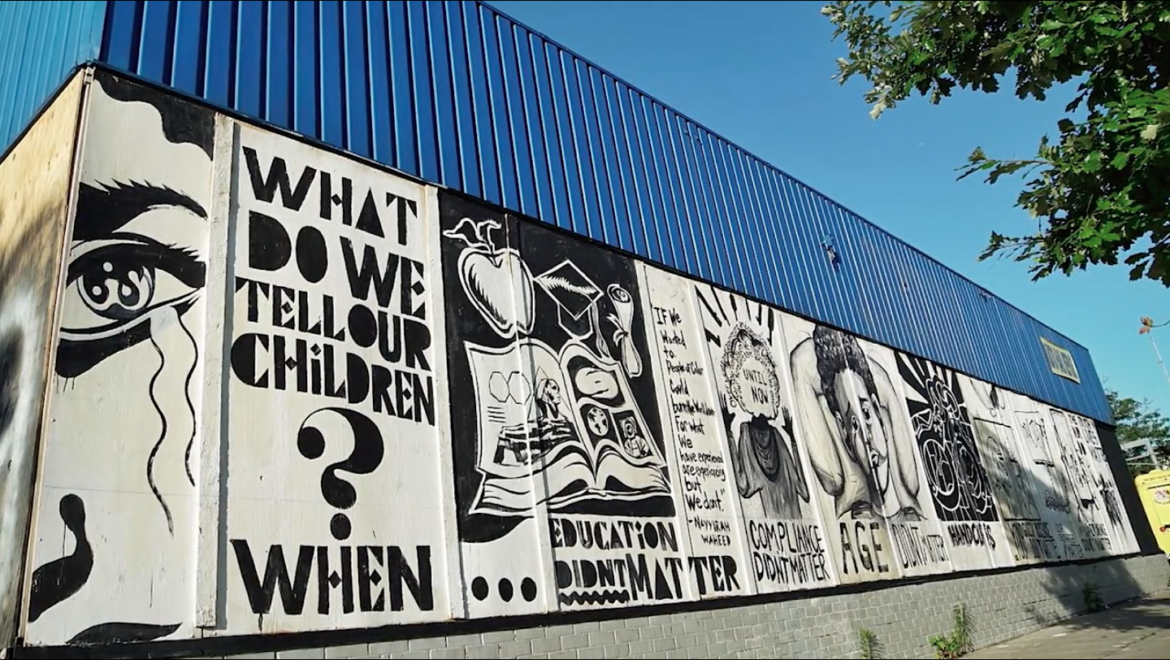 On July 7, 12 artists quickly organized to create a public, unsanctioned mural on an empty building to help the community heal. Five weeks later the building was demolished. Photo by Ryan Stopera.

We are a perfection-obsessed culture. It shows up in how we make art and how we honor art made in public spaces. The drive to be perfect all the time can, in turn, block creativity and facilitate a culture of rigidity and a lack of expression. I am not writing this to give anyone advice on how to be more creative, I am writing to make the connection on how artmaking – especially in public spaces – unblocks the possibility of healing and protest in a hyper toxic climate.

On July 7, one day after Philando Castile was killed by St. Anthony Police Officer Jeronimo Yanez, a group of 12 artists and storytellers came together, through phone calls to one another, to process their grief and offer a different response to police brutality. They came together to make visible the community’s pain through art and erected a public mural in honor of Castile at the intersection of Lake Street and 20th Avenue.

WHAT DO WE TELL OUR CHILDREN WHEN…

THE TRUTH IS OUR LIVES DO MATTER.

“A mural is a way to take up space that’s really visible, can be put up quickly in a public place, and it will catch people’s eyes because it changes the landscape,” said Olivia Levins Holden, one of the muralists who participated on this project and a teaching artist at the Children’s Theatre Company. To her and others, the mural sends out a message that lives beyond the event.

For Levins Holden, there are many languages people speak around a traumatic event. There’s the language of protest, of immediate responses, of anger and fear, and of healing. The artists wanted to create a space that can be a part of a conversation, a space that potentially shifts the conversation towards collective healing.

“I want to do things with my energy that are going to feed the energy of the people who are doing the work,” Levins Holden said. “I don’t want to be adding myself to the number of people who are being depleted by responding in the same ways. I want to do something energizing, something that’s healing for me and other people. And also, to be in community with other people who want the same things.”

Jeremiah Bey Ellison, one of the artists who initiated the mural process, believes the mural represents a creative introduction to local protests. It’s not an alternative to protests, rather, it turns protesting into an ecosystem instead of an act.

“We need to figure out new ways to take up space that doesn’t have to just be with our bodies. new ways to tell the story, to insert a narrative in spaces where we can,” Ellison said.

However, Ellison also pointed out that, while our city has the people and the talent to conjure creative responses, there are cultural gatekeepers who decide what can be put up on a public wall.

When there is no lack of talent, no lack of intelligence, no lack of desire or drive, no lack of political critique, Ellison said, in the Twin Cities. He noted that the lack of murals like this one is evidence of our controlled public art climate.

“There’s a context to why people are so excited about what we did,” Ellison said. “Public art and professionalized art have carved out the type of thing we did. It’s making no room for it.”

Andres Guzman, a fellow artist who participated in the mural-making, said that if they try to go about painting the mural in the proper “authorized” way, it would’ve never happened, or it would’ve happened six months from now. The proper authorization doesn’t give artists much space to express in the moment. 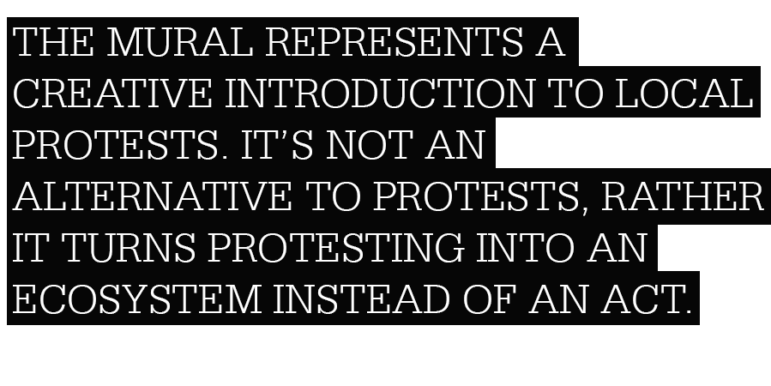 “This is the visual art version of the highway protest,” Guzman said.

Arianna Genis, a digital organizer with TakeAction MN and one of the key organizers for getting a wide community support around the mural, said, “expressing our creativity as people of color is an act of resistance.”

Since the mural was created in July, an altar was built nearby to honor the space. That small corner off of Lake Street organically became one for people of color to come together for healing and holding space with each other. And what’s even more beautiful is how people invested and helped maintain the mural and the altar. They protected it, honored it and respected it. Genis said that when people are able to be in the same space together, it solidifies relationships and make them stronger.

However, the mural has led an energetic but short life. The building it was painted on was demolished just five weeks after the mural’s completion. The same day wrecking crews worked on the building, a few of the artists were able to rescue each panel from the wall.

While the fate of the mural is uncharted, the intention for this collective remains strong. Ellison told me that the point is to create public work, to challenge systems of oppression, to contribute to a new narrative, and to contribute to an art movement that is not making money off black death.

“Creating art without permission has become a necessary response to institutionalism, to obedience through the guise of professionalism,” Ellison said.

The creation of the Philando mural was refreshing. Each step towards making it happen was a step towards definition-making and resourcefulness. It continues to question who has access to doing public art in Minnesota. How is funding influencing the impact and the quality of the work? Whose art benefits from funding? Whose art gets watered down? Are we being honest with our stories as artists?

Levins Holden said that if money and jobs for artists are treated as a finite resource, then that puts artists inherently in competition with each other. That is not healthy. The process of making this mural was the opposite of that. The artists and organizers found resources for it, and it was something they couldn’t accomplish alone. Building relationships over the years with each other is key for making this mural happen.

For Levins Holden, she believed that if artists can all be looking out for each other, try to remove competition between each other, and focus more on getting what everyone needs, there is capacity to create alternative economies that can continue to support artmaking.

Arts + Culture
Xiaolu Wang
Do NOT follow this link or you will be banned from the site!
X