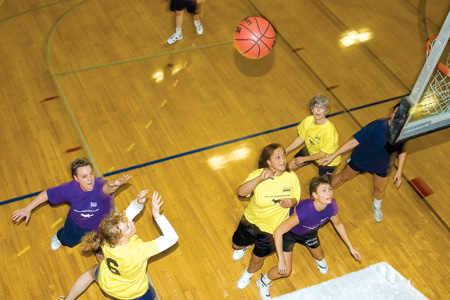 For the past five years, Cathy Dolan, 48, has sat on the sidelines wistfully watching her daughter, Mary Dolan-O’Brien, now in high school, play basketball. Although Dolan herself played basketball in high school and college, she hasn’t played since.

“I wanted to quit being a spectator and get back to the participant level,” she said. But as a mother of four children she had little time and fewer opportunities to play—until recently. A few months ago, Dolan was recruited by the Silver Fox, a new basketball league for women over 40.

Now, each Wednesday, Dolan gets off the sidelines and onto the basketball court at the YWCA in Minneapolis’ Uptown neighborhood.

Lauri Ludeman, 39, the league coordinator, began to recruit players for the Silver Fox a year ago. Ludeman played basketball from seventh grade through college and then went on to coach college ball at Itasca Community College and Augsburg College. She learned a lot of life lessons on the court and wanted other women to have that experience, she said.

“After I realized that there were no places for women in their 40s and 50s to play basketball on a team, I decided to make it happen,” Ludeman said. She has recruited about 20 players, enough to form the league’s first two teams, the Fastbreakers and the Pick and Rollers.

Lynn Grosklags, a 41-year-old guard with the Fastbreakers, is happy to be among them. “After having a career and a family, it’s hard to get out and do something other than the routine,” said Grosklags. “I’m having fun.”

Many of the women in the Silver Fox played basketball in high school or college, but some have never played before. The women have different backgrounds, careers and fitness levels. Currently, the oldest player is 52. One woman in her mid-60s played the first game but quit because she was concerned about injuries.

The league has a relaxed environment that emphasizes safety, and games are refereed by certified officials. There are no official practices and the women coach themselves. Before the season started, Ludeman held a clinic about safety, injury prevention and basic skills.

On Wednesdays, players arrive 30 minutes before game time for a casual but serious practice. They dribble and pass the ball and chat. Sometimes, they even get advice from the sidelines.

Twelve-year-old Jeffrey Robinson III watched intently as his grandmother, Rita Johnson, 49, shot practice hoops before a game. He gave her tips and cheered her on. Johnson has never played basketball before, but Ludeman put her at a post position because she is taller than others on the team.

Johnson’s daughter, Tamara Moore, has played professionally with the WNBA’s Phoenix Mercury and New York Liberty and is currently playing with a team in Israel. Moore encouraged her mother to join the Silver Fox. Now Johnson calls her daughter after each game and they exchange stats. “I’m going to play every season!” Johnson said.

Although the league is small, Ludeman hopes more women join so it can become more competitive. “It would be better if there were more players,” Dolan agreed. Dolan, a forward guard for the Pick and Rollers, chuckled as she admitted that the Fastbreakers beat her team the last two games.

Johnson, also a Pick and Roller, said they lost their fourth game to a younger team from the under-40 league but felt confident every time they scored a point. “I could tell the younger girls were thinking, ‘This lady is old enough to be my mom!’” she said.

Ludeman expects Silver Fox enrollment to steadily grow over the next few years. Currently, the YWCA sponsors about 30 teams for women under 40 years old. Ludeman thinks that as time goes by those women will naturally progress to the Silver Fox league.

Ludeman has already allowed some 39-year-olds who feel more comfortable in the older league to join the Silver Fox. “This is a fun, safe and competitive place for women,” Ludeman explained. “Everyone is welcome. It’s all about fun.”

“Women shouldn’t worry or feel uncomfortable about joining,” added referee Joanne Reeck, 26. “There are lots of talents and abilities here. Lauri will help them find their place.”