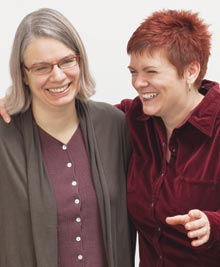 In 1999, seven female artists got together. They weren’t finding a lot of opportunities as actors, directors or playwrights in the Twin Cities. Collectively, they decided to start a theater based on the principle of creating opportunities for women in theater arts.

It wasn’t just a local problem. A 2002 study for the New York State Council on the Arts found that among nearly 2,000 productions at more than 400 Theatre Communications Group member theaters in 2001-02, only 17 percent of plays were written by women and only 16 percent had female directors.

Theatre Unbound has played a role in transforming those statistics for 13 years by working to shrink the gender gap on stage with a mission of bringing audiences “thought-provoking live theater conceived and created by women” and providing female perspectives “on issues that are relevant and universal.”

“People make a lot of assumptions when they hear ‘women’s theater,'” said Anne Bertram, executive director. “As soon as people work with us, they understand what we’re doing.”

“I didn’t consider myself a feminist,” Poirier admitted. “When I realized that [feminism] was more about just having equal opportunity I decided that yes, I was a feminist.”

Over the years, Theatre Unbound has staged productions that have provided opportunities for 137 female directors, 435 female actors and 109 male actors, as well as 126 female playwrights from the 10th century to the 21st.

Last spring, Unbound performed Shakespeare’s “Julius Caesar” with an all-female cast-a twist on the fact that in the playwright’s day, men played all the roles.

“In 2005, we did an all-female production” and just picked “The Tempest,” Poirier said. “This time, we looked at three or four different scripts. With ‘Julius Caesar,’ there was an electricity. It felt right, and it was powerful.”

One review said “the production seemed to negate the question of gender altogether”-and Bertram said that was their aim. “We wanted to show that masculinity and power are not the same thing.”

Indeed, the production was honored with the 2012 Ivey Award for Inventive Reinterpretation at this fall’s annual celebration of Twin Cities professional theater.

With performances based in the Lowry Lab Theater in downtown St. Paul for the past several years, Theatre Unbound manages the traditional on more nontraditional terms.

“We run like a theater that has its own space and full-time staff-but we have none of those things,” Poirier said.

Both Poirier and Bertram negotiate schedules that involve day jobs, families and other commitments. Over the last 13 years, they’ve both learned a lot about planning, communication and community.

“You learn to go with the flow,” Poirier said.

Bertram agreed. “It’s important to say thank you. And say it often.” Poirier praised her fellow core company members and board members. “You have a group of people that you count on to come through when the going gets tough,” she said. “There are milestones that are very satisfying. You get through every show, you forget the hard part, so you do another one.”