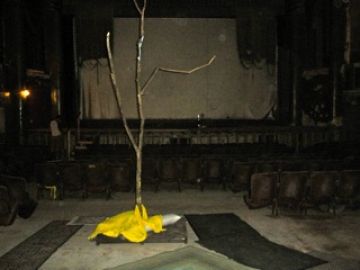 Theatre Pro Rata has added a sixth character to their current production of Samuel Beckett’s classic Waiting For Godot, and it makes all the difference. The sixth character is actually the production’s location, the dilapidated old shell of the Hollywood Theater, out of the business of presenting movies since the late 1980s. This shell of an old movie house makes a perfect little existential home base for Vladimir (Dave Gangler) and Estragon (James Rodriguez), two homeless bums waiting for a friend(?)/a father figure(?)/a savior(?) who may never show his face.

That’s the thing about Godot: you never quite know what it’s about, hence all the question marks above. Ask six different people, and you’ll get seven different opinions. They’ll all sound perfectly plausible, until you hear the next theory. Pretending you know, definitively, what Godot is about is ridiculous. Happily, it’s also beside the point. It’s a comical Rorschach Test of a play that will accept almost any personal interpretation you need to put on it in order to be able to follow the characters through the evening and accept their bizarre little world. On the page, it can seem a bit forbidding. But in practice, it’s quite entertaining.

I suppose you could argue for an interpretation rife with angst and despair, but there’s something oddly endearing about the way Vladimir and Estragon just keep going, and the way they stick together. Any friendship or relationship has its ups and downs, but these guys seem lost without each other. They’re a team, a comedy team. In fact, James Rodriguez’s performance as Estragon kept nagging at me until I realized who he was calling to my mind: Mike Fotis, of Brave New Workshop/Ferrari McSpeedy improv/sketch comedy fame. Then I started thinking, “Well, wouldn’t that be an interesting production.” Then I realized, “Wait, that’s exactly the production I’m getting right now.” Even though the evening is very tightly scripted on the page, the interplay between all the actors makes it feel fresh and almost improvised at times. Not quite sure how they do that, but it feels very true to the spirit of the piece, and keeps an audience on their toes (while chuckling).

Director Ryan Ripley and his cast of able buffoons are emphasizing the comedy and letting the philosophy take care of itself, which seems like exactly the right choice. They don’t overdo it, they just follow Beckett’s lead. After all, absurdity is more often laughable than it is tragic. The outlines of the play are fairly simple. Vladimir (Didi) and Estragon (Gogo) are waiting. In each act, they have different coping strategies for passing the time. In each act, they are visited by the slightly menacing giant form of Pozzo (David Tufford) and his hapless servant-on-a-leash Lucky (Jesse Corder). In each act, they receive a visit from Godot’s messenger boy (Hazel Cutting), telling them that Godot has been delayed and will probably not arrive until tomorrow. Within that framework, all sorts of comic shenanigans come to pass.

The old Hollywood Theatre is the perfect place to watch Waiting for Godot. Whenever one reads the script, it’s easy to imagine a blighted landscape. But the reality of most theatrical settings falls short. They always feel small. The Hollywood Theatre is appropriately vast and in a state of real disrepair. Wherever you look, wherever the actors move, the ramshackle sense of rot is ever-present. (Don’t get me wrong: it’s not dangerous, or smelly, or filled with vermin. Yes, watch your step. But they’ve cleaned the place up just enough that you can sit and enjoy the show, but not enough that you’d think it was actually a viable location for anything else. Plus, it’s cooler inside than outside on days like this, and they crank in a little AC before the show and at intermission for added comfort.)

Gangler and Rodriguez do most of the heavy lifting here. They are perfect comic foils for one another and are a lot of fun to watch. Even when the play seems to be circling back around on itself, they keep things fresh and different. Though each line could be freighted with all kinds of Meaning with a capital M, the actors play the truth of the moment and leave the larger concerns to the minds of the audience. Having seen Rodriguez do a very different turn, as a man in a dress in Landscape of the Body a couple of years back, I’m now very interested to see what he does next. I’ve had the misfortune of watching poor Dave Gangler struggle with being the very best thing in some truly awful productions over the years (which shall remain nameless). It was a lot of fun to finally watch him get a chance to be good in a play that’s just as good as he is.

Tufford has crossed my theatergoing path before in things both highbrow (The Homecoming) and low (She: Immortal Witch Queen of a Lost World), all equally as fun to experience as this Godot, which seems like a perfect blend of both brows. Jesse Corder, as Pozzo’s servant Lucky, does a fine job whether he’s a silent companion executing a bit of prop comedy, or a guy who won’t shut up in Lucky’s signature act one monologue that here is both a torrent of words and a four man chase.

Hazel Cutting doesn’t have a lot of stage time as Godot’s messenger boy, but standing in front of that vast movie screen, clear on the other end of the theater from the audience, she makes for an arresting visual image that looms large over the proceedings.

If you think Beckett’s not your thing, see Theatre Pro Rata’s production of Waiting For Godot. If anything’s gonna make a convert out of you, these folks will. Very highly recommended.