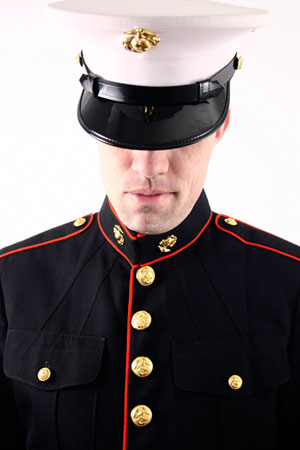 “You can’t handle the truth!” Those words will forever be connected to the gripping final scene of Aaron Sorkin’s 1992 film A Few Good Men. What many may not know is that the movie starring Tom, Jack, and Demi was based on the play of the same name also written by Sorkin. In Urban Samurai’s production of A Few Good Men, currently playing at the Sabes Jewish Community Center in St. Louis Park, those familiar words—while delivered differently than in the film—are just as powerful. The stage production gives audience members the opportunity to experience what for many is a familiar piece more intimately and feel more invested in the courtroom drama’s final verdict.

For those unfamiliar with the plot, A Few Good Men tells the story of two Guantanamo Bay-based Marines on trial for the murder of a fellow Marine in their unit, Private First Class William Santiago. The question isn’t whether they committed the act that led to his death (they did), but whether they were carrying out a disciplinary order from another officer. When Lieutenant Junior Grade Daniel Kaffee (Nicholas Leeman) is brought in to defend the two Marines, Lieutenant Commander Joanne Galloway (Colleen Somerville) questions his story. However, Kaffee—the son of a famed lawyer—surprises everyone when he declines to strike a plea bargain and embarks on a trial that could damage the reputation of the Marines by revealing hidden “code reds” and other unbecoming activities.

It could be argued that A Few Good Men is more fit to be a feature film than a play. The action takes place in a variety of indoor and outdoor locations, and the use of flashbacks to reveal events leading up to Santiago’s death seems disjointed on stage. Transitions between scenes are also slightly awkward, leaving the audience sitting in the dark listening to Marine cadence calls. Still, Sorkin’s strong script holds up regardless of fancy sets or effects. And as with any good courtroom drama, multiple viewings reveal hidden nuances and new discoveries, so the play isn’t hurt by the fact that its script feels virtually identical to the film. Under these circumstances, director Matthew Greseth does a nice job making sure what really matters in bringing this play to life—the acting—is done right.

Playing Kaffee, Nicholas Leeman is likeable and believable as the green lawyer defending his assigned clients. Leeman’s comedic background serves him well, allowing him to infuse the character with quirks while still being believable in the courtroom. Colleen Somerville holds her own as the hardened Galloway, the only female character. As Kaffee’s lawyer sidekick, Dave Gangler hits every joke, clearly becoming an audience favorite. And as one of the Marines on trial, Derek Ewing does a good job bringing humanity to the smaller, yet complex, role.

The most imposing force of this production is Zach Curtis as Lieutenant Corporal Jessup. Filling the large shoes of Jack Nicholson, Curtis makes the role his own. He’s intimidating, raunchy, and sure as hell not someone I’d want to piss off.

If you’ve seen the film a few times before, it shouldn’t discourage you from seeing this production. Even on a small stage, A Few Good Men is a story worth revisiting.