I’m sometimes asked what the worst play I’ve ever seen is, and I usually respond by describing a production of The Wiz put on by a group of students at a Harvard College dorm in 2002. The Wiz was written as a black version of The Wizard of Oz, but the cast of this particular production consisted almost entirely of white students—who had not made it to the Ivy League on the basis of their acting ability. I can see what they were thinking when they decided not to act black, but it’s difficult to fully convey the awkwardness of the moment when the actress playing Auntie Em (in my memory, she is blonde) stepped out on stage and exclaimed in precise diction, “Oh, chile! I do declare!”

The touring production at the Orpheum Theatre this weekend is The Wizard of Oz, not The Wiz—but the Dust Bowl is a long way from Broadway, and I imagine that if Dorothea Lange were to try to photograph this cast’s rendition of a hard-bitten life on the land, the resulting portaits would look like sepia-tinted versions of Steve Carrell’s beatifically optimistic face on the 40-Year-Old Virgin poster. That ain’t right, not no-how.

Following the plot and, mostly, the dialogue of the 1939 film adaptation of L. Frank Baum’s 1900 novel, this production has Dorothy transported via tornado to the magical Land of Oz (actress Cassie Okenka gamely mimics being twisted about as the whirlwhind is projected on a scrim in front of her), taking out the Wicked Witch of the East and provoking the ire of a Western Witch played offhandedly by Pat Sibley, who director Nigel West seems to have told to act as though she’s in a Mel Brooks movie.

In fact, the whole production has the feel of a Mel Brooks movie—but with jokes that make Robin Hood: Men in Tights look like The Producers. (Enchanted fruit-flinging tree: “How do you like them apples?”) The performances are cartoonish, bleaching all the feeling out of Harold Arlen’s timeless songs. “Somewhere Over the Rainbow,” the first to be heard, sets the tone: whereas Judy Garland cut straight to the song’s heart of poignant longing, the happy-go-lucky Okenka presents “why, oh why can’t I” as a silly question that she seems to forget ever occurred to her even before the strings fade out. Most effective are Adam Jepsen, Peter Gosik, and especially Jesse Coleman as the Scarecrow, the Tin Man, and the Lion respectively. Gosik, charmingly costumed by Tim McQuillen-Wright, finds a touching steadfastness; and Coleman, playing it safe, simply channels Bert Lahr.

The production design, also by McQuillen-Wright, looks cheap (by Broadway standards, it probably was) and suffers from a disappointing lack of ambition. Whatever McQuillen-Wright’s budget, was it really the most he could do to give the Wizard a single basket to represent an entire hot air balloon? The basket descends from high above, and it seems no wonder the Wizard can’t control his balloon—to adjust its heat source, he’d have to shimmy up 30 feet of cable. 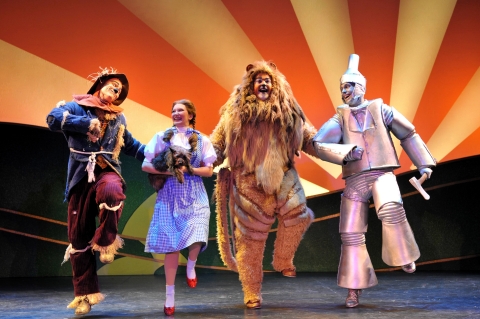 I must, in honesty, report that the Friday night audience seemed well-pleased with the production’s straightforward rendering of the classic film as a paint-by-numbers Broadway musical—though only the patrons in the back of the venue awarded the production a standing ovation, making it the first traveling-musical performance in my memory where the opening night audience was non-unanimous in taking to its feet (The 101 Dalmatians Musical, unbelievably, included).

In the producers’ defense, the 1939 movie is a towering cinematic achivement, a convergence of talent and timing such as you’re lucky to get once in a century. Any stage production that tries too closely to ape it is bound to fall into the uncanny valley of resemblance so near, but yet so far, that it’s a little grotesque. (The musical “restores” a weird number called “Jitterbug” that was planned for the film but, fortunately for filmgoers, failed to make the final cut.) What can be done when a stage production takes a classic film as a starting point and inspiration rather than as a simple blueprint is currently on glorious display at the Guthrie in Kneehigh Theatre’s Brief Encounter.

As I was leaving the theater, I noticed a little girl in full Dorothy costume, complete with braids and ruby slippers. I’m sure she enjoyed the show, but though she probably doesn’t realize it, I thought, her life in the theater—wherever it may lead—is only going to get better from here on out. Oh, chile, I do declare it will.