As long as there are young lovers, there’ll be warmhearted tales of adolescent angst in the face of life’s fateful twists and turns. One of the most enduring is pretty-poor-girl-pining-away-for-handsome-rich-kid, from Cinderella on. One of the more interesting is Trinidadian novelist Rosa Guy’s My Love, My Love, which tosses into the mix not only class but the seldom acknowledged aspect of color-struck black folk.

Guy basically took Hans Christian Andersen’s The Little Mermaid and set it in the French Antilles of the Caribbean as the saga of a peasant girl who devotes herself to the aristocratic boy whose life she has saved. Though his upper-crust family feels her skin is too dark and her family too broke, she is undaunted, determined to hold out out whatever the cost to her dignity. My Love, My Love is adapted to the stage in the form of Once On This Island, a hugely successful musical with book and lyrics by Lynn Ahrens, music by Stephen Flaherty, and scores of wistfully sighing audiences in its wake since 1990 (Off-Broadway at Playwrights Horizon) and 1991 (Broadway at the Booth Theater). It now comes to Washburn High School in Minneapolis directed by area luminary Regina Marie Williams, best known for her phenomenal acting and incredible gift with a song.

At the helm is musical director Nancy A. Lee, Head of the Theatre Department at Washburn, who guided last year’s production of The Wiz and saw it walk off with no less than a handful of Hennepin Theatre Trust Spotlight Awards. Among Lee’s credits are The Wizard of Oz, West Side Story, Pirates of Penzance, Joseph and the Amazing Technicolor Dreamcoat, and Hair at Southwest High School; and Bye Bye Birdie, Pippin, and How to Succeed in Business Without Really Trying at Slinger High School in Wisconsin.

What moved you to choose this script?
These are characters that our students can relate to. The story takes of issues of culture and class. It also requires a number of strong female characters, for which we have a number of very talented senior girls. Also, the male characters offer our boys fun roles.

How did you come to select Regina Marie Williams as the director?
I wouldn’t say she is the director but one of the co-directors. [Choreographer] Aimee Bryant, Regina, and I are sharing the load. However, Regina is taking on the stage direction, Aimee the movement, and I am doing the music. Together Regina and I are doing everything else such as costumes, set, etc. She has a connection to the professional world so has been able to recruit a wonderful light designer and costume assistant. Regina volunteered to work with me on The Wiz last year. She is amazing with high school students. 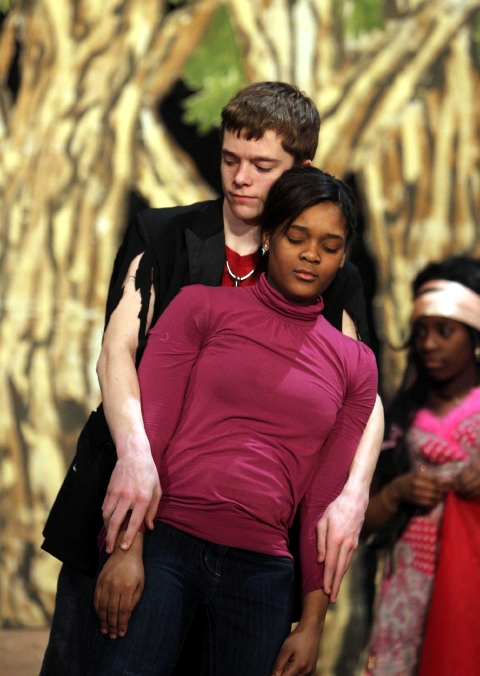 Would you say a little about your cast?
The whole cast minus two little girls that are playing the role of Little Ti Moune are Washburn students. Many of the members of the cast were in The Wiz. Therefore, we were aware of some of the talent that would participate again this year. Bri Salhus, Serihuh Pappllion, Isaac Mutchison, and Martina Guerra all recieved [Spotlight Awards] for the performances in The Wiz and will be featured in this production. Some of the new talent includes Chris Moore, Asheley Tinnin, Cameron Farris, Caroline Smythe, and Antionio Duke.

What is most rewarding for you about doing this production?
Feeling like I have the trust of these students and the ability to push them to new levels of excellence. And, working with the amazing Regina Marie Williams and Aimee Bryant.