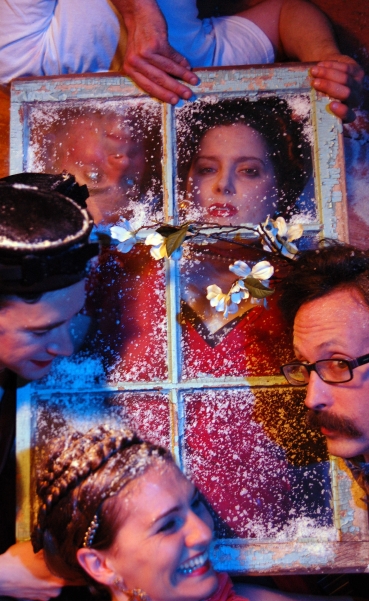 An old rule of stagecraft has it that you don’t put a gun onstage unless you’re going to shoot it. A newer rule, specific to the Walker Art Center’s McGuire Theater, apparently stipulates that you don’t bring a can of beer onstage unless you’re going to use it as a freighted symbol of ignorance and brutality. In The Making of Americans, the ominous brew was Grain Belt Premium; at one point in Radiohole’s Whatever, Heaven Allows, four members of the company guzzle Budweiser so quickly that it overflows their mouths and drenches their bodies. The action is meant to illuminate their characters’ coarse abandon, but I just felt bad for the beer.

Radiohole are a Brooklyn ensemble that The Drama Review calls “one of the few collective performance companies working today.” I could name more than a few such companies working today in Minneapolis alone, but never mind that; Radiohole are indeed a collective performance company who have become “notorious” (as the Walker’s Philip Bither puts it) for their innovative, bracing productions. Whatever, Heaven Allows (WHA?!)—the work they’re performing this weekend at the McGuire Theater—is a Walker-commissioned world premiere.

What’s most innovative about Whatever is that it’s a theatrical production that viciously attacks theatrical conventions; the piece could be subtitled Theater Eats Itself. It’s based on the 1955 Douglas Sirk movie All That Heaven Allows, in which wealthy widow Jane Wyman falls scandalously in love with her gardener (Rock Hudson), incurring the disapproval of her closed-minded WASP friends. All That Heaven Allows is the definitive Sirk film, a gloriously melodramatic epic with deeply saturated colors, and as befits a classic, it’s inspired multiple homages—most notably, Todd Haynes’s 2002 Far From Heaven, in which the forbidden affairs are interracial and homosexual.

Radiohole’s approach is to almost completely abstract the film’s themes and plot from the trappings of conventional storytelling; Whatever comprises a series of episodes in which the several company members portray the film’s scenes in exaggerated farce, with dialogue (both original and taken from source texts—the Bible, instructional manuals, and everything in between) that refers to the unfolding events sometimes much more obliquely and sometimes much less obliquely than normal dialogue would. (The heroine’s son to the gardener: “Motherfucker!”) At the plot’s climax, the house lights come up and a company member describes the events that would take place if Radiohole were to perform them, which we are told the company will not do. Why? It’s a deliberate act of self-sabotage, to drive home the point that Whatever is not a melodrama but rather a statement about melodrama.

That sounds awfully dry and academic, which in fact the show is, despite the sloppy mess that the stage physically becomes. One way to approach an exercise like this would be to make it accessible for non-egghead audiences who might enjoy the antic episodes—the set’s multiple video screens are manipulated on the fly via remote controls strapped to the company members’ wrists, and things get very raucous as the performers sing, dance, scream, and fling liquids about—but Radiohole are no Blue Man Group, and they’re not about to let the audience off that easily. In one way or another the show subverts nearly everything that one normally enjoys about the theater: plot, character, dialogue, you name it. Emotional cues are conveyed in a hyper, mocking manner that makes it clear you’re not actually supposed to feel anything. 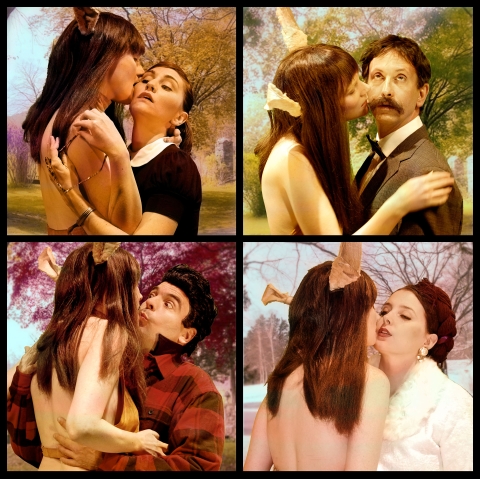 So what does that leave to enjoy about the show? Sheer spectacle, for one thing. Possibly the best way to approach Whatever is to regard it as improv comedy with high intellectual ambition: imagine trying to tell a long story entirely in simile. For the working-class gardener’s disruptive entrances into genteel residences, Radiohole’s Eric Dyer runs twice around the set and throws himself into center stage by sliding under a hanging set of Venetian blinds like he’s stealing second. To represent the formal overtures of a set of socialites at a cocktail party, three company members march across the stage gesturing and chanting like a primitive tribe. For a scene in which several characters get drunk, the actors splash their faces with brightly-colored liquids having the consistency of paint, which remains on their faces for subsequent scenes.

It’s all very watchable, but that watchability is a trap: Radiohole are running theater over a cheese grater, and if you let your guard down you’re liable to get scraped. Whatever is decidedly not an homage to Sirk: it’s a heartless deconstruction and mockery of everything that makes melodramas work, and if you’ve ever actually enjoyed one, you might get the (probably correct) impression that the company members are mocking you as well. I’m glad I saw the show, but I sure wouldn’t bring my mom. For all the company’s technical accomplishment and academic rigor, the world of Radiohole is an emotional vacuum; when the show ended, I was glad to come up for air.