I’ve often cited those two aphorisms, and in general I think that they accurately describe what I look for in art—and in life. They don’t, however, apply to The Great Game: Afghanistan, Tricycle Theatre’s epic cycle now playing at the Guthrie Theater. The most important thing about The Great Game is not its style but its substance.

The Great Game comprises 12 one-act plays presented in three installments, which may be seen over the course of multiple weeknights or, on weekends, over the course of a single long day at the McGuire Proscenium Stage. (Tickets for each installment are sold separately.) That’s a lot to ask of the audience, but the show’s gargantuan length and scope is also its central thesis: that Afghanistan deserves and needs the kind of commitment and investment it’s too rarely received from the rest of the world.

Each of the plays was written by a different playwright, but Tricycle’s artistic director Nicolas Kent—who co-directs The Great Game with Indhu Rubasingham—has insured that the plays connect and flow together cohesively. The plays cover a time span from 1842 to 2010, and by and large they use standard theatrical conventions to depict the triumphs and travails of Afghanis and their welcome or unwelcome visitors. There’s a hint of magical realism here and some poking at the fourth wall there, but nothing too terribly avant-garde. The Great Game is deliberately educational, and is best appreciated as such. If you really don’t like it when characters say things like, “Pretend I don’t know anything about this, and explain it to me from the beginning” or “Let me give you a little history lesson,” you’re going to have a hard time with The Great Game.

That said, educational theater is very often done very poorly, and The Great Game is done well. Its devices are familiar and its cast more sturdy than inspired, but the piece convincingly argues that its subject matter is all too unfamiliar to many people whose countries’ actions have profound—often, profoundly terrible—effects on Afghanistan. The Great Game tells its story with a real sense of urgency, and for a show that includes a lot of screaming, crying, lecturing, and gunfire, it respects the subtlety and complexity of its subject matter. (There are more cheesy moments on every page of The Kite Runner than in the entire length of The Great Game.) I found the experience to be absorbing and, often, fascinating.

The production gathers steam over its course, less from cumulative effect or narrative structure than from the fact that the concerns of present-day Afghanistan have obvious relevance to the audience and the relative lack of hindsight makes the period’s heroes and villains less obvious. The later plays are also more creatively structured and surprising than the earlier plays. Though best seen as a whole, any of the three segments of The Great Game could stand alone, and the third would be the one to catch if you can only see one.

The first segment, covering the period 1842-1930, is by far the weakest, though the relatively unfamiliar history it covers makes it an eye-opener. The production’s eponymous “Great Game” was the struggle between Great Britain and Russia for dominance in Central Asia in the 19th century, and Part One establishes the tragic duration of Afghanistan’s role as a thorny battleground for global powers. Though it’s by and large an interesting segment, it concludes with Joy Wilkinson’s Now is the Time, the low point of The Great Game and a reminder of the histrionic tone the rest of the production gratifyingly manages to avoid. 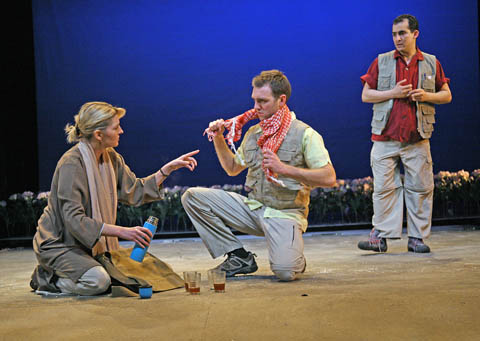 The plays of Part Two are set in the period from 1979 to 1996, when the U.S. was making the bed we now lie in by supporting Afghan insurgents in their battle against the country’s Soviet-backed government. Though The Great Game later credits the Afghan rebels with speeding the end of the Cold War (is there anyone who was alive in the 80s and hasn’t taken credit for the end of the Cold War?), it presents perspectives sympathetic to all the major parties involved. The most telling of these four plays is David Grieg’s Miniskirts of Kabul, where ousted president Mohammad Najibullah admits killing and torturing, but claims to have done so in the service of the kind of freedoms (miniskirts, and everything they represent) that were historically unprecedented and were to be cruelly robbed by the Taliban. Colin Teevan’s The Lion of Kabul is very standard-issue as a script, but generates the most dramatic heat of any play in The Great Game as a U.N. representative pleads with Taliban fighters who are frighteningly resolute in their conviction that the will of Allah requires acts of horrific brutality.

Part Three brings the action into the present day, arguing strongly that the U.S. and its allies should stay in Afghanistan to provide security and support rather than pulling out and risking yet another period of turmoil—turmoil that could have nightmarish global consequences, particularly if it were to spill over into Pakistan. Representing 9/11 with a set change that’s completely unexpected and constitutes the single most powerful moment in The Great Game, Part Three depicts a country that’s learned history’s lessons all too well, a country rightly afraid to be optimistic.

Appropriately and provocatively, The Great Game concludes with a scene from Simon Stephens’s Canopy of Stars in which a British soldier, at home between tours, argues with his wife about whether or not he’s doing any good in Afghanistan. Stephens puts in the mouth of the soldier’s wife skeptical words that have been on, or on the tips of, many American and British tongues in recent months. Those words sound a lot scarier at the end of The Great Game than they would have sounded if you heard them on the radio while driving to the theater, and that’s the production’s most impressive accomplishment. Though there are a lot of things theater can do that The Great Game does not, it does sit you down for several engaging hours to take a long, close look at a country that most of us ought to think a lot more about than we do. For that reason, The Great Game is worth what it asks.