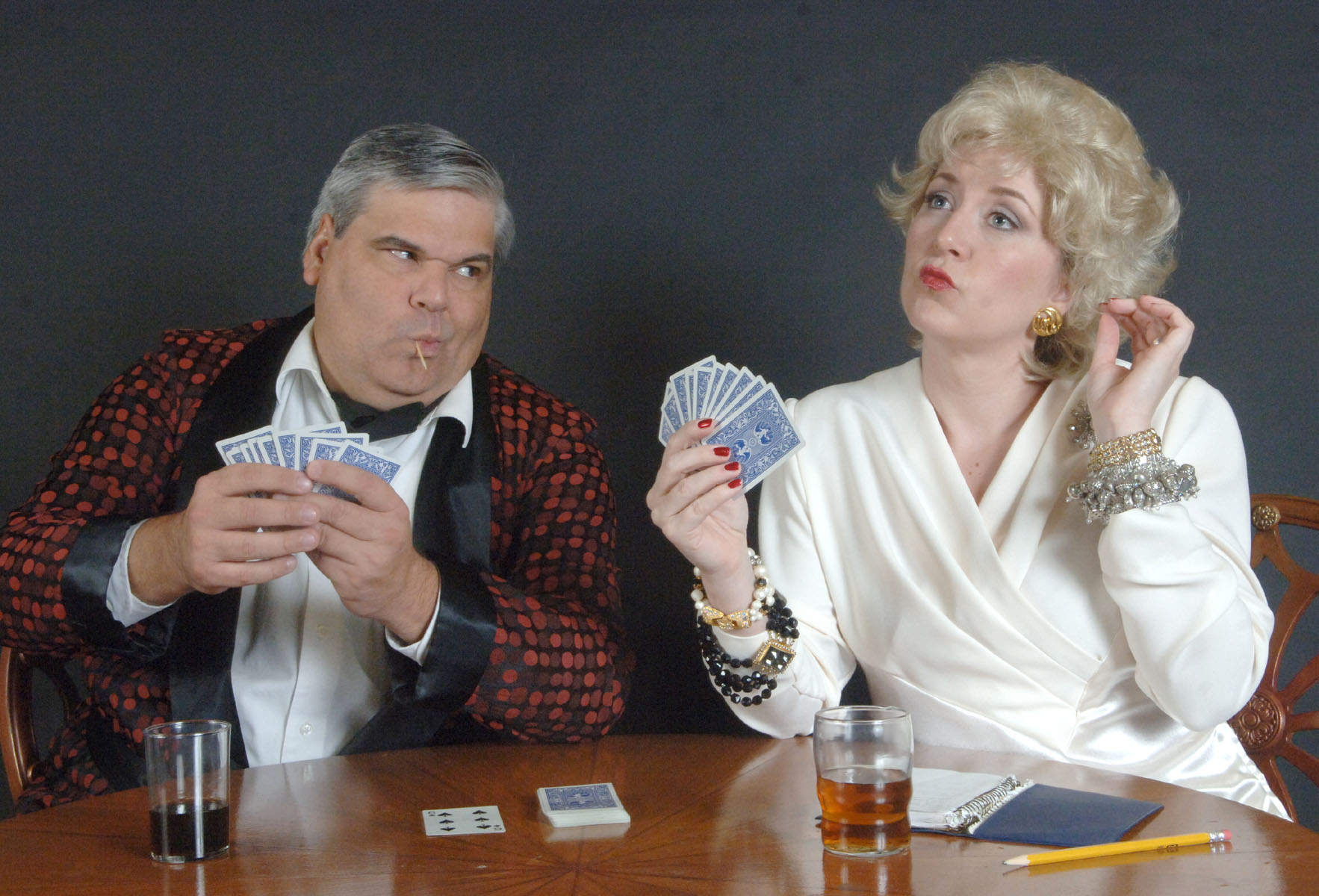 Brian Joyce and Kjersten Johnson in Born Yesterday. Photo © Act One, Too, Ltd., courtesy Theatre in the Round.

Harry Brock’s “got a preposition for you.” Just don’t try to tell him he may not mean what he says or you’ll swiftly be bullied into rewriting grammar rules to suit him. It’s this and other brief lines and small gestures that endeared Theatre in the Round’s staging of Born Yesterday to me.

As the program will inform you, Born Yesterday opened on Broadway in 1946 and was Garson Kanin’s most successful play. It’s a comedy in three acts, all of which take place in a swanky Washington D.C. hotel room where pushy millionaire Harry Brock (Brian P. Joyce) has set-up shop to woo Senator Norval Hedges (William P. Studer) into bending the law or rewriting it so Harry can make even more millions in the junk business. He’s joined in D.C. by his longtime love interest and former showgirl Billie Dawn (Kjersten Johnson) who proclaims early on in the show, “I’m stupid and I like it.” The audience is introduced right away to the other major players, who are Ed Devery (Eric Ringham)—Harry’s always well-Scotched lawyer—and Paul Verrall (Christopher Kehoe), an inquisitive reporter hoping to interview Harry. It seems the only thing that will make things difficult for Harry to wine and dine the senator is Billie’s stupidity. Harry solves this problem by recruiting Paul to educate Billie. Much to his dismay, enlightenment is contagious and Harry receives a bigger education than he bargained for

The unusual stage at the Theatre in the Round, which is actually round with the audience seated on all sides, lends itself perfectly to the single setting for the play and pulls the audience into the D.C. hotel room to get acquainted with the characters. The actors successfully keep up a brisk pace throughout the production delivering the witty, concise dialogue at a good clip. Only a half-dozen awkwardly delivered lines and overly long pauses break the atmosphere. Brian P. Joyce, a lumbering, beefy man, physically fits the part as Harry Brock and plays the one-dimensional bully with finesse. Kjersten Johson plays a charming and unselfconscious Billie. Her character changes as Paul educates Billie, but Johnson wisely improves Billie’s grammar and broadens her perspective while still retaining the same accent and mannerisms.

It was my first visit to Theatre in the Round and while I didn’t know what to expect, I was delightfully surprised by the skill of the actors and their smooth performance of this classic. If you share my dislike for holiday classics but do want to see a show, spend an evening this holiday season at Theatre in the Round, where Paul Verrall will be happy to educate you too.