I’m sitting at the Guthrie Theater, with time to kill between the two halves of my daylong Singled Out marathon. Singled Out is a four-show festival of short plays by what the program describes as “emerging companies.” The companies are at varying levels of emergence, but all of them are known for producing quality work and have been hand-picked by the Guthrie’s associate director Benjamin McGovern to perform in the theater’s Dowling Studio this weekend and next.

I started my day with Mortem Capiendum, a revival of a 2008 piece by Four Humors Theater, whose Love is Blind…and Furry I enjoyed last year at Bedlam. The play was written by its three actors—Matt Spring, Brant Miller, and Jason Ballweber—with Nick Ryan, and its title refers to a miracle tonic hawked by a team of snake-oil salesmen, who claim that the potion can hold death itself at bay. Over the course of the play the tonic’s power is put to the test by all three men, who emerge somewhat the worse for wear. The audience I saw the show with reacted enthusiastically to the wonderfully loose interplay among the three actors, with the best moments belonging to Miller as a sweet but dimwitted hype man and to Ballweber, playing against type as the trio’s angry mastermind. Themes of mortality and redemption are handled very lightly in a show that fundamentally sets out to entertain—which it does, with flair. 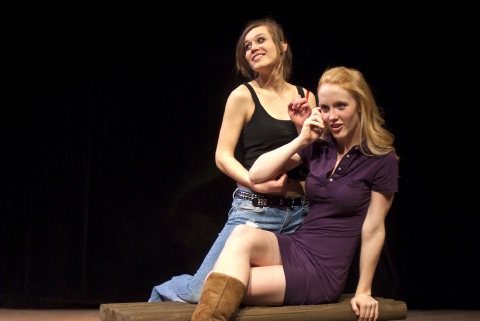 After Capiendum, which felt almost improvised, the New Theatre Group‘s American Sexy (another 2008 revival) landed with a heavy thud, like a copy of The Riverside Shakespeare dropping in your lap. The characters are pot-smoking college students goofing around at a campsite, but the meticulousness of Trista Baldwin’s dialogue and plotting are immediately, and persistently, evident. Three of the characters—Ally Carey’s Jess, Darius Dotch’s Darren, and Joanna Harmon’s Lexi—are in a No-Exit-like lust triangle, and indeed it would be hell to spend eternity with the incredibly obnoxious Lexi. Her brash exterior is, natch, hiding a wounded interior; Jess has a secret too, the revelation of which occurs like clockwork about ten minutes from the play’s conclusion. There are a few very funny moments involving Patrick Kozicky’s uptight character Andy, but Lexi and Jess start out talking like they’re in Girls Gone Wild and end up sounding like they’re in Waiting for Godot—neither of which, despite an up-to-moment plot device involving sexting, strike me as being particularly authentic. The strongest aspect of the production is the acting—particularly that of Harmon, who despite her character’s implausible dialogue is supremely confident and completely riveting.

And now, back to the studio! Slated for this evening: Sandbox Theatre’s June of Arc and Lamb Lays With Lion’s The Black Arts. 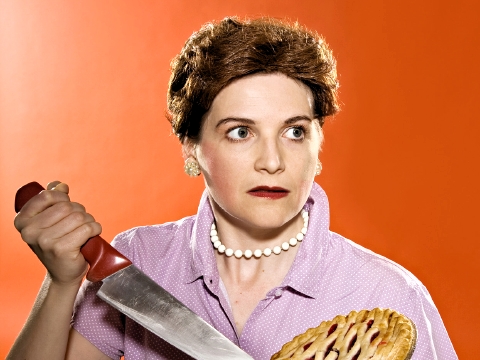 In the lobby after June of Arc, I was explaining to someone that I’d been pleasantly surprised by the show. “Well,” she said, “it’s a great premise.” Actually, I disagreed: I thought the premise was awful. A look into the psyche of a repressed 1950s housewife? 47 years after The Feminine Mystique, it seemed like about the least interesting thing you could set out to do on stage. Sandbox Theatre succeeds, though, with a production (originally created for last summer’s Minnesota Fringe Festival) that’s conceived and executed with taut discipline under director Lisa Moreira. In a series of monologues as June (Cleaver), Heather Stone goes from being slightly unhinged to slightly more unhinged, talking about the path not taken with an almost ghoulishly forced grin and horrifically stiff gestures. Her set is a smaller-than-life kitchen that she presides over with no help from her husband (Ryan Hill) or sons (Matthew Glover and Derek Miller), who respond to her thoughtful gestures with hollow groans and vacant stares. The monologues are punctuated with reenactments of vintage advertisements, which are highly entertaining and also serve to underline the era’s obsession with polished surfaces and genteel manners. It’s an absorbing production that packs a real punch.

Jeremey Catterton, artistic director of Lamb Lays With Lion, is a friend of mine, and it happens that a couple of weeks ago we had a conversation about the importance of honesty and constructive criticism among friends and within the theater community. In that spirit, I must report that I was disappointed by The Black Arts. Lamb Lays With Lion have lately been focusing on techniques of disruption in theater, but their secret weapon is that they’re also very good at playing it straight. The Black Arts, directed by Catterton and created by the company, starts strong: the Saturday night audience was howling with laughter at Kevin Chick’s performance as a flamboyant goth magician who vogues in the spotlight and discourses with relish about his close personal relationship with Satan as he executes magic tricks that a fifth-grader could do. Suddenly, after about 20 minutes things start to go wrong. I’ll say no more except to note that the disruption wasn’t as shocking as I expected, and that the best parts of the show’s second half are also the best parts of its first half. The production does defy expectations, but not in a way that does much to engage the material. The Black Arts is notable for being the only premiere among the four Singled Out entries, and I hope the company continues to work with the piece. My excitement for the company’s follow-up is unabated: in Lamb Lays With Lion vs. Katie Mitchell’s The Seagull, they’re going to stage two productions of the Chekhov play, taking place simultaneously on the same stage. It’s safe to guess that things are going to get messy.