On the surface, the second half of this year’s Naked Stages at Pillsbury House Theatre seems to hit all the hot buttons you’d expect when someone explains it’s a program funded by the Jerome Foundation to incubate new work by emerging performance artists. But these are good performance artists, so there’s more going on underneath that surface. Again, it seems wrong to “rank” presentations that are clearly still works in progress. But there’s a lot to like (and ponder) here, so I wanted to encourage people to go and see them.

If you find the human body unsettling, then you’ll probably find Kelley A. Meister’s Seducing Those Who Are Afraid makes you squirm. I’ll admit to a few squirmy moments myself, and I thought I was pretty open-minded (if nervous) going in. The second you step in the door, however, you’re in the middle of Kelley’s world. Kelley has a chorus of Kelleys—boi bella trainwreck, dana jeffries, Jaime Carrera, Jared Maire, Katie Burgess, Kitten Ess, mondi lionel lion, Nicole Amaris, sinan gokhur, Towanda Cave Pearl LaMay, and Will Scarlette (no, I did not make any of those names up, and no, I did not forget to capitalize some of them). Each door and each pathway to the seating area is peopled with these Kelleys—fellow performers who all wear a color copy image of a smiling Kelley face with the eyes cut out over their own face. “Hi, I’m Kelly. Thanks for coming to my show,” they say as they hand you your program. They stand, greeting and watching, until the show begins, and they join the actual Kelely onstage. It is both welcoming and odd, which is, of course, exactly the effect the show is going for.

Every seat in the auditorium has a little handwritten slip of paper on it. Each slip has a phrase espousing a fear.

A fellow audience member had left her glasses at home and couldn’t read the little slips of paper, so she asked me if I would tell her what they said. I rattled off a bunch of them for her. There was a repeat here and there but mostly each seat had a very different sort of fear perched on it.

Once the show proper got started, Kelley led her chorus of Kelleys through their paces. Seducing Those Who Are Afraid is strangely charming, largely because Kelley is searching for acceptance—and who among us isn’t? Beyond all the taking artistic rejection letters and turning them inside out into acceptance letters, Kelley’s quest is something much more basic and universal. For all the enormous Post-its plastered on the wall with fears writ large on them, for all the perfectly timed dueling/overlapping video projections, for all the nude/semi-nude/oddly-costumed dance breaks on and off the wall, it mostly boils down to the fact that Kelley wants her father to accept her for who she is. Even as she provokes, she is reaching out.

Much of the speaking portion of the video is her in drag king attire—tweed, glasses, scribbled-on facial hair—and this one character who keeps recurring turns out to be her father. Often he says things that are outrageously over the top but accepting (think along the lines of the guy in “Heathers” who cries out, “I love my dead gay son!” and you’ve got an inkling). Sometimes he says things which are judgmental. But there are moments, and I believe they are genuine, when in his own halting way, in words from a letter he wrote her, the man basically says to his daughter that though he doesn’t understand and is often offended by what she does, there is nothing she can ever do to change his love for her, because she is his child, and a miracle. The audience gets a real sense that Kelley wants to believe this. And can’t. She admits she didn’t tell her parents about the show, and when they stumbled on the fact that it was happening, she still didn’t invite them to come. She isn’t sure if that was the right decision. Part of me, in the audience, hopes her parents show up anyway. 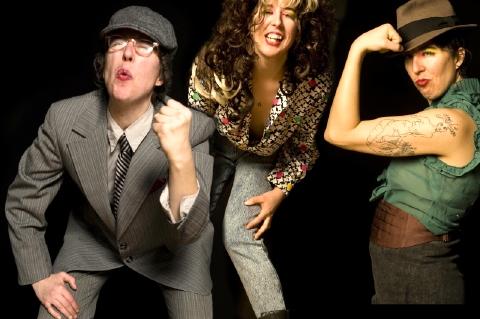 The only thing missing for me here is a little context. Kelley knows who she is and what she does. Kelley’s friends and regular audience members know who she is and what she does. Me, I’m a first-timer. So when she mentions her estrangement from her father and his reaction to her art I wonder, “How long and how deep is this estrangement? Is this (as I suspect) the first time Kelley has focused so personally on her fears, and included anything about her parents? What is Kelley’s other art like? Is what we’re seeing more or less hard core than previous explorations of sexuality? Before, was she always hiding behind a character, or a construct, and only now we get to see her as a person rather than an artist telling a story?” None of these unanswered questions detracted from my experience, but I found myself wondering if the experience might have been richer, or more moving, had I known a bit of the bigger picture of Kelley’s art and life in which it extisted.

Seducing Those Who Are Afraid is a litany of all the things that drive me crazy about self-referential art. Yet it seduced me, too. Kelley’s not just creating a happy place for herself. She clearly wants to create it for everyone who steps through the theater door. I have a hard time finding fault with someone aiming for that.

It’s weird, but both times now, the first half of each Naked Stages evening seems to take more space on the page to wrap my head around (but I manage), while the second half almost resists summarization altogether. The second half of the evening, Miré Regulus’s solo work KnotDrawn: My Goodness, the Milk, and the Daddy(body) [between my father, and my son] takes the kinetic energy in the room down a notch. There is no chorus, just Miré. There is but a single projection on the wall, and that at the very beginning. This piece is as much about silence as it is about words. It’s about showing as much as telling. Rather than letters on the wall, it’s chalk drawings on the floor. Instead of disco dance breaks, we get a pas de deux with a child’s tricycle to the gruff whimsical tones of Grover from Sesame Street singing “Around, Over & Under & Through.”

Miré quite literally ties herself in knots, wrapping lengths of rope around her arms, her legs, her torso. At one point she secures her hair into a ponytail behind her head, and then ties that hair off to her ankle, then proceeding to contort herself around the stage floor as if this wasn’t an inconvenience to movement at all. There is hopscotch between earth and heaven and hell. There is a child’s voice calling out for its mother, often at inconvenient, awkward times (just like life). An ode to “The Golden Pussy” takes on a different tenor when parenthood is thrust into the picture. No one element of life is impervious to the others. “Everyone should have a creation story as fantastic as Jesus is.” Or Jesus’s. I wasn’t sure. Either works. Miré’s body (the artist fully clad in this half of the evening) is an instrument that gets as much of a workout as her voice. There’s no standard narrative here, more an exploration of certain parts of existence. The audience can focus on and take from it what they will. There’s a lot going on here that’s hard to quantify, but is nonetheless compelling. Every now and again, something unexpectedly magical happens, like a length of rope crossing the stage all by itself (yes, I know there was probably fishing line involved, but damn, it looked really cool.) Knotdrawn… is a mighty fine puzzle, well worth puzzling over.