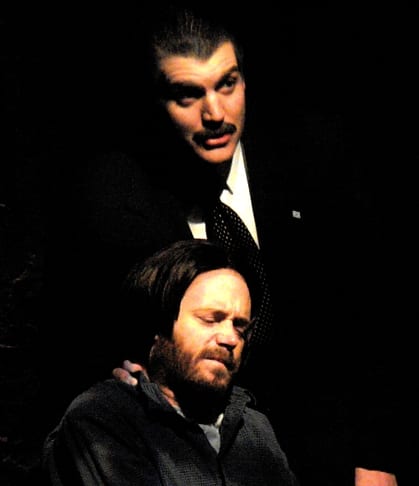 Tom Stoppard is one of theater’s most frighteningly intelligent playwrights, so if a script with heft is what turns you on, even a competent production of one of Stoppard’s plays will be worth your Saturday evening. So it is that I can recommend Park Square Theatre’s entirely competent production of Stoppard’s 2006 play Rock ‘n’ Roll—as long as you approach the show with the understanding that it’s a sprawling epic principally about the essential nature of the human condition, not about rock ‘n’ roll.

What makes the word “frightening” apt to describe Stoppard’s style is the fact that he stands ready and willing to layer his scripts with more levels of meaning than anyone of lesser erudition can penetrate. Rock ‘n’ Roll starts with the frame of a personal story told against a sweeping historic backdrop, then sheetrocks the frame with a meditation on political philosophy, stuccos it with elements of music history, and crowns it with—ready for this?—an exploration of the foundations of psychological consciousness as considered in light of the sociological culture-structure debate, where subjective consciousness represents culture and the biological brain represents social structure and the economic mode of production. To pull that off is, in playwriting terms, indeed to rock out with one’s cock out.

The play has settings both in Prague and in Cambridge (England), represented respectively by house right and house left in Nayna Ramey’s unobtrusive set design. The play opens in Cambridge in 1968, as dyed-in-the-wool Communist intellectual Max (Peter Moore) is parting ways with his young protégé Jan (Dan Hopman), a Czech who is returning to his home country to stand with his countrymen facing the Soviet invasion. (Max’s teenage hippie daughter Esme [Jane Froiland] would like to give Jan a very special something to remember her by; whether or not she succeeds becomes a plot point later on.) The action proceeds to unfold in back-and-forth episodes over the succeeding 22 years, as Jan loses the idealism that he may or may not ever have had in the first place and Max very grudgingly learns the value of realpolitik. In the final scene, all the original characters (give or take a few) reunite at Max’s dining room table to figure out what has and hasn’t changed, and what implications that has for the rest of their lives.

You may have noticed that nowhere in that plot summary does rock ‘n’ roll appear. Right. Rock ‘n’ roll serves both as a soundtrack (you don’t hear “Venus in Furs” very often within shouting distance of Rice Park, so enjoy it while it lasts) and as a symbol of the joyful human spirit unencumbered by the weight of political systems and economic conflicts. To Jan, it’s everything. To Max, it’s nothing—not only because of his generational status (he’s fond of noting that he’s exactly as old as the October Revolution), but because, like any good Marxist, he thinks that culture is merely an opiate. In light of this production, The Intelligent Homosexual’s Guide to Capitalism and Socialism with a Key to the Scriptures (which featured a similarly unrepentant Marxist), and Beaverdance (in which Marx traveled back in time to organize Midwestern beavers against French fur traders), it seems that Marx is having a very hot moment in local theater. Blame the economy. 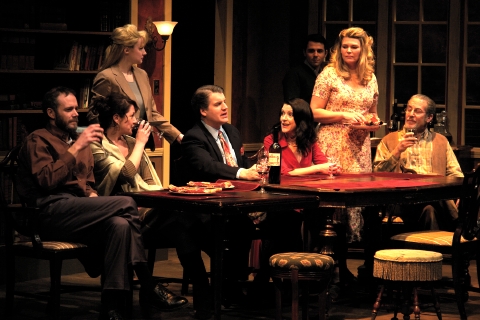 With a steamroller of a script like this, basically all you need to do is get out of its way, and by and large director Mary Finnerty succeeds in doing so. Moore and Hopman are strong, the former wrapping his fundamental idealism in a dry, cynical nature and the latter well-advisedly underplaying the role of a tenderhearted man who just wants to buy the world a Coke. Hopman provides the key to his character in a brief but thoughtfully played moment where he struggles with a decision regarding whether or not to sign a petition that may possibly do some good but, more likely, will put him in hot water with the authorities. He ultimately signs, his body language eloquently communicating that he’s resigned to being in hot water whatever he does, so he might as well follow his conscience.

With the exception of Anna Sundberg in a small role that she makes the most of, the remaining cast members are less successful. They’re not bad, they’re just unmemorable and a little stiff—and they don’t quite win the uphill battle against their characters’ challenging accents. Jennifer Maren does win empathy in the extremely difficult dual role of Max’s wife Eleanor and, later, the couple’s grown daughter Esme; both characters get a lot of stage time and some big moments, but they’re paired with romantic partners who are respectively implacable (Max) and absent (Jan). When Eleanor falls apart and beats her fists against her husband, it feels like her character might prefer to throw the blows at the playwright who gave her so much sound and fury with so little to signify.

I suppose it’s a measure of both Stoppard’s and Finnerty’s success that sitting through Rock ‘n’ Roll does indeed feel like living under the Iron Curtain for a couple of hours: there are emotions, but they feel muted and futile, and a sense of black humor prevails as the only reasonable response to a defeated situation. Almost every time a character says something remotely hopeful, another one is standing by like a vulture with a stinging rebuke at the ready. The play does have what my mom would refer to as a “good ending,” but it feels given rather than earned, and thus a little empty.

For theater buffs, Rock ‘n’ Roll is worth seeing as an example of the many things a play can do. Whether it actually succeeds in doing all of them, and whether they’re things you really wanted to see done in the first place: those questions have their own answers, which you’ll have to decide for yourself.