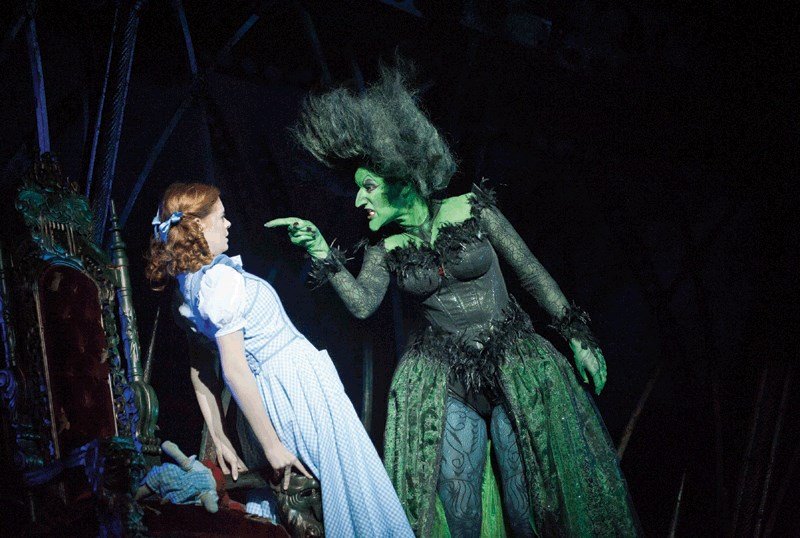 Amid the hustle and bustle of the holiday season and the sub-zero temperatures, there was a warm feeling coming from the Ordway Center for the Performing Arts as opening weekend of Andrew Lloyd Weber’s The Wizard of Oz was in full swing. The yellow brick road could be seen from the beautifully decorated lobby courtesy of Bachman’s. And an enormous Christmas tree was seen from two stories, indicating the holiday season upon us. An enchanting night was about to begin full of ruby slippers, flying monkeys and of course those infamous words, There’s No Place Like Home.

The Wizard of Oz takes place in rural Kansas where Dorothy makes her debut with her little dog, a real Terrier who takes stage direction very well. Dorothy is running from the villainous Mrs. Gulch who is not happy with her little dog. Auntie Em and Uncle Henry and the other farmhands rally around Dorothy and Toto. Not soon enough before the weather changes and, “It’s a twister, it’s a twister.” A tornado ensues and Dorothy is nowhere to be found. As Dorothy realizes she is not in Kansas anymore, the colors in Munchkin Land become more vibrant and Dorothy begins her journey as she befriends a scarecrow, a tin man and a lion along the way. As they get closer to Emerald City, the anticipation from the cast grows and Act 1 is over after just 90 minutes. The Witch’s castle sets the scene for the second and final act. The wicked witch takes over along with her crew of flying monkeys. Dorothy belts out “Somewhere Over the Rainbow” as the clock ticks down determining the fate of her life. After the witch is melted and her broom is brought to the Wizard, happiness opens among the four new friends as they realize their journey is coming to an end and there is “No Place Like Home.”

This performance of The Wizard of Oz not only met but exceeded my every expectation of how to act this timeless classic out on stage. Only a few small changes were made that I noticed that deterred from the original screen play but it remained a powerful performance. Why change such an iconic musical? This show is appropriate for children to grandparents and what a wonderful way to spend an evening with family during the holiday season.