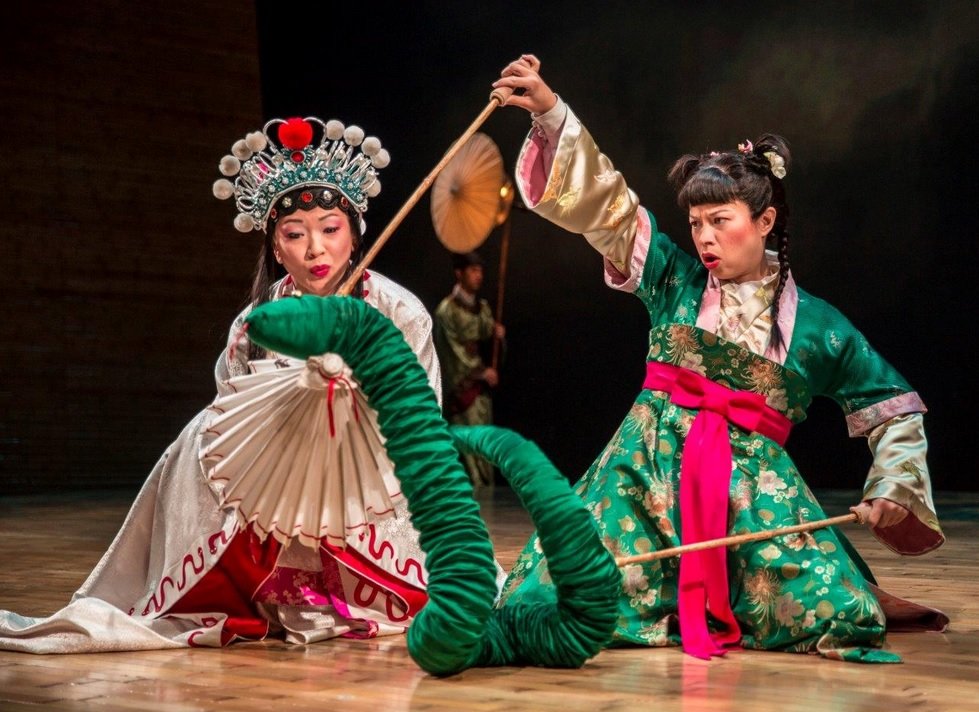 The White Snake delivered just what you’d expect from a Tony Award winning director in Mary Zimmerman as her cast presented a heart-filled performance at the Guthrie Theater on September 13.

It started with a few laughs and giggles from the audience reacting to the personality actor Tanya Thai McBride took on as she played the co-star, Green Snake. As the play went on, the performance grew stronger and thanks to no intermission, the crowd stayed hooked and let out a few giant laughter’s. In the third act, the play really hits home and you no longer see puppets, props or stage actors–you feel the true meaning of this play:  love, acceptance and destiny.

Written and directed by Zimmerman, she based The White Snake on a classic Chinese fable. Her version at the Guthrie Theater is similar to the first major literary adaptation in 1624, The White Maiden Locked for Eternity in the Leifeng Pagoda. In that version, White Snake is a protagonist rather than a demonic serpentine as she’s portrayed in the earliest versions of the fable.

In this version, Green Snake plays White Snake’s confidante. McBride played the character as a trickster, similar to the character Donkey from Shriek. With Amy Kim Waschke as White Snake, the two really popped together and it showed on stage.

White Snake in this version was a woman trying to live the life as a normal woman. She was challenged by the fact she’s part snake and she tries her best to not be exposed by Xu Xian, a man she marries with the hope she could live a regular human life. However, a Buddhist priest named Fa Hai tries to creep doubt into Xu Xuan’s mind to trick him into thinking his wife is a demonic serpentine.

McBride’s performance certainly got better as the play went on, in the begging her attempts of humor received a few giggles from the audience but later she delivered her best lines when the play entered the more dramatically portion.

Her most comedic part which brought the house down with laughter was when Green Snake held her fist in the air over Xu Xuan and the musical crew changes the tune. Green Snake suddenly freezes as one of the narrators’s, played by Richard Howard, tells the crowd he’s going to tell them the rules to Chinese girl gestures for fighting.

Waschke’s dramatic performance was great but actor Jake Manabat stole the show as Xu Xian. Manabat masked many different expressions as his character went through an emotional rollercoaster. Whether it was spunk, compassion, fear, shame or in love; he embodied them all and was nothing short of astonishing.

Manabat too, even provided a few big sparks to the audience mainly because of his delivery. An example was when he shared with White Snake how he was kidnapped by Fa Hai and was a prisoner in his temple.

There was no doubt the relationship between White Snake and Xu Xian really grew and was felt by the audience members. In the third act when Xu Xian is talking to White Snake on two knees, the love of the characters and his acceptance of White Snake touched the audience.

Tragedy unexpectedly hits them near the very end. Somber and silence was the crowd’s reaction, until a narrator said the following: “Don’t be afraid, it’s impossible to die alone.”