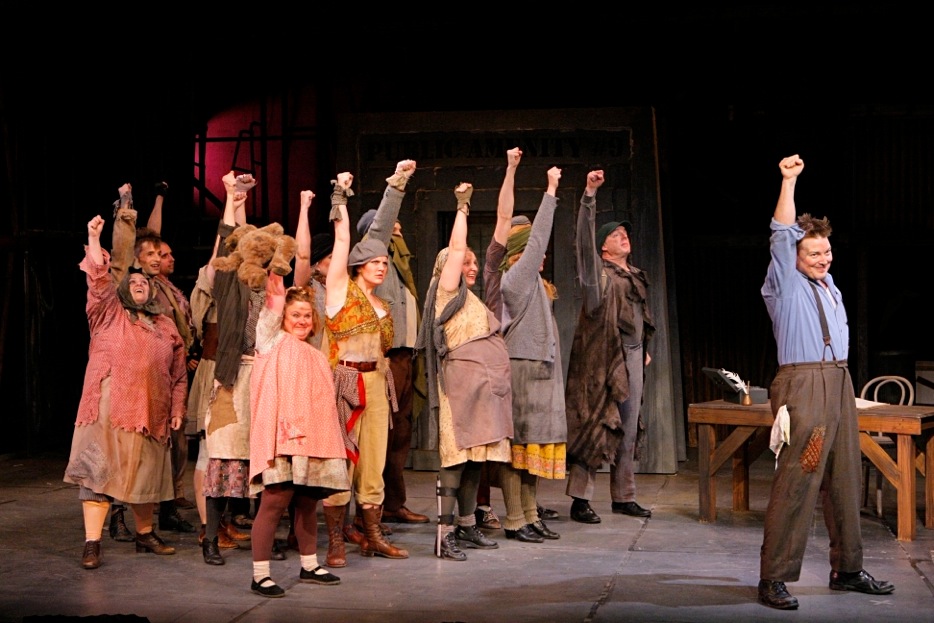 If I had to describe the production of Urinetown at the Jungle Theater in a single word, it would be “exuberance.”  John Command directs an energetic and talented group of singers and dancers to tell the tale of a world where water is scarce and the ability to relieve oneself is limited by the size of one’s pocketbook. Micturition seems like an unlikely topic for a rousing musical, but this show radiates exuberance and provides for a very entertaining evening.

Mark Hollmann wrote the music and lyrics, with Greg Kotis providing the book and lyrics. Kotis developed the idea for the show when he encountered pay-per-use toilets in Europe. The show originally opened as part of the New York Fringe Festival. It opened on Broadway in 2001 and ran for three years, winning three Tony Awards. The absurd premise is used to ridicule corporate greed, populism, government corruption, and revolutionary fervor.

But the show also parodies the musical theater genre. At the beginning, we learn from the corrupt police officer’s exposition with the character “Little Sally” that this is a musical that doesn’t have a happy ending—but so much goes on between the beginning and the end, that once the audience learns that all the heroes are dead or will soon be dead, all that is necessary is a rousing cast song to close the show. The show effectively uses the Bertolt Brecht technique of distancing, whereby we see the flaws of even the most sympathetic characters, tempering our emotional involvement. The only exception would be Little Sally, whose sweet nature and metaphysical explanations are a constant delight to the audience.

The central hero in the story is Assistant Urinal Custodian Bobby Strong, who collects the fees the poor must pay each morning and evening to use the urinals. If people attempt to relieve themselves without paying, such as behind a bush, they are arrested and sent to Urinetown. Urinetown is a mystery: is it an actual place, or is it a euphemism for death? Everyone in power is corrupt, from Penelope Pennywise (who is in charge of the local urinal) to the police to the politicians—all the way up to Caldwell B. Cladwell, the president and owner of Urine Good Company (UGC), which has a monopoly on all urinals. Caldwell’s greed has no limits. He even seeks to impose another rate hike for the right to pee. On stage huddles the poor, scrapping and begging each day to raise enough money to relieve themselves.

One day Bobby’s father violates the law and pees without paying. After his father is “sent to Urinetown,” Bobby meets and falls in love with Hope, who turns out to be Cladwell’s daughter. The following day, racked by guilt over his father’s death, Bobby leads a revolt at the urinal and lets everyone pee for free. Police are called, and Bobby and the poor rebels take Hope prisoner and flee underground. Needless to say the ending is not happy, but we get some rousing musical numbers, such as “Run Freedom Run” and “I see a River,” along the way.

There are numerous strong performances in the production. My favorite is that of Elisa Pluhar, who plays Little Sally with a strong singing voice and little-girl speech. Bradley Greenwald, as Officer Lockstock, stays in delightful character as the narrator of the show while he also does the dirty work for the powers-that-be. Patrick Murphy plays the earnest, if not all that bright, Bobby. Murphy’s enthusiastic singing ignites the rousing gospel numbers. Tiffany Seymour as Hope spends much of the production gagged on stage, but she gets to shine when she finally takes charge of the revolution. Kersten Rodau’s instantly captures the audience attention in her portrayal of the greedy urinal manager who becomes mush when she sees learns that Hope, the daughter she and Cladwell had together years earlier, is in peril and rescues her from certain death. But this is clearly an ensemble effort and the 20plus people on the stage keep things moving at a quick and—yes—exuberant manner throughout the show.