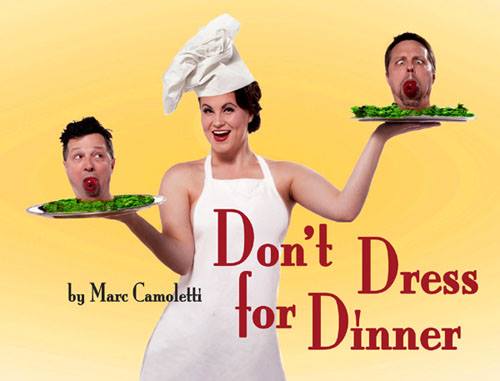 Photo courtesy Theatre in the Round

If you like Laurel & Hardy, Clue, and people getting sprayed in the face by a soda siphon, don’t bother getting dressed for dinner – go see Don’t Dress for Dinner instead. If hamming it up onstage is not your thing, now might be the time to be making your restaurant reservations, because glatt kosher this is not.

Don’t Dress for Dinner is a light-hearted romp of a play of the sort best enjoyed by not reading the synopsis beforehand. The story hinges on an infidelity or two complicated by mistaken identities, lies that grow hilariously convoluted, and a great deal of consternation on the characters’ part. In the hands of director David Coral, the play is presented as an exaggerated farce.

The most complicated “you’ve got it all wrong” situation that P.G. Wodehouse wrote for Bertie Wooster is mild compared to this fare. This is not a bad thing: the “accidental” double entendres that spin out are some of the play’s best parts, including an extended riff on “service” and cooking that would have done Mae West and Jane Russell proud. The action moves briskly, with plenty of running onstage and a liberal use of sight gags and muttered comments to keep things fresh. The timing of many of the gags could have been tighter, but the Sunday matinee audience didn’t seem to mind. Whenever the action slows down too much, another character enters to throw a wrench in plans to neaten up the rapidly tangling affairs. (Read that both ways.)

This sort of material generally works well with one of two approaches: exaggerated and hammed, or deliciously subtle. Subtle was not the chosen path, a decision that pushes the characters towards caricature. This would have proven very tiresome over the course of the play if not for the presence of Heather Burmeister (Suzette), whose more grounded delivery provides much-needed contrast. Burmeister/Suzette steals scenes like hotcakes, and the second act ramps up a notch when her character pairs off with Ron Ravensborg’s (Robert) as his pretend niece/mistress (it’s complicated, just see the show).