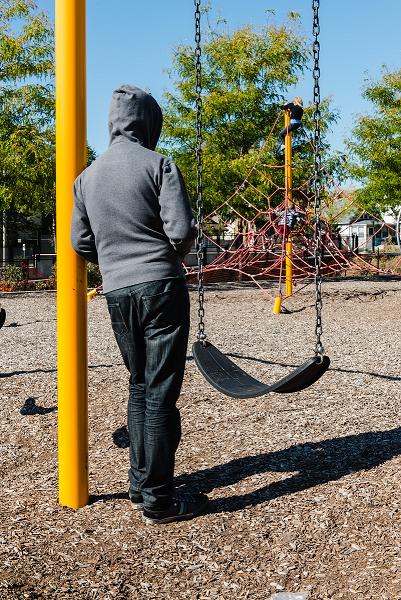 It isn’t often that a piece of theater makes me want to crawl out of my own skin and yell at the characters on stage.  And I mean that as a compliment.  Theatre Pro Rata’s production of Steven Fechter’s play The Woodsman is that kind of theater.  Normally, even when I’m totally engrossed in a play, I’m still scribbling my notes to come back to later, noting telling bits of dialogue and key elements of the design.  Not giving anything away, there’s a key scene late in the action of The Woodsman where a former child molester named Walter (Adam Whisner), who has previously struck up a conversation with a pre-teen girl named Robin (Lillie Horton) in the park, crosses paths with her again.  In my notes, I started writing the word I couldn’t say out loud, “Leave.  Leave.  Leave.  Leave.”  And I was directing that word just as much (or more) at Walter as I was to Robin.  That’s the strange alchemy of The Woodsman.  With a stellar cast under the sure directing hand of Erik Hoover, this Pro Rata production actually had me concerned for the well-being of a person who I understandably have very mixed feelings about.  Just as much as a feared for Robin, I feared for Walter. Because The Woodsman had allowed me to see Walter as human.  Not an uncomplicated human.  Not a perfect human.  But a human nonetheless.

I struggled with how to define Walter just now when writing about him.  Is he, is anyone, ever a former child molester?  Can you say, as with addiction, a recovering child molester?  Or is it, once a child molester, always a child molester?  That last iteration is of course the thinking that I, and I’d wager most audience members, bring into a production like The Woodsman.  Fechter’s script has a daunting task to perform, not just to help us to understand the inner workings of the mind and heart of a person like Walter, but to get us to somehow not dismiss him out of hand as irredeemable.  Because that’s the question burning in the center of the play – can a person who’s done something horrible ever overcome that, in their own eyes as well as the eyes of others?  Does society ever really forgive someone?  Can someone who molests a child ever be punished enough?  Do some people not deserve a second chance?  And what do the answers to those questions say about not just them but the rest of us as a society?

Walter has served 12 years in prison for molesting multiple girls between the ages of 10 and 12.  Released from prison to try and build a new life for himself, the only apartment that will rent to him that he can afford is, inconveniently, not all that far away from a school.  Some of the only people who will talk to Walter are his court appointed therapist Rosen (Ben Tallen), and his brother-in-law Carlos (James Rodriguez).  Even Walter’s own sister won’t come to visit him, and doesn’t want him anywhere near her children.  Someone itching to talk to Walter who he’d rather see less of is an unforgiving cop named Lucas (William Goblirsch), who is just waiting for Walter to screw up so they have an excuse to throw him back in jail.  Despite the odds, Walter somehow manages to stumble upon a woman who is willing to tackle the obstacles of building a relationship with him in his co-worker Nikki (Katherine Kupiecki).  One of the unexpected complications of living so close to the school is that Walter spies a young man much like he used to be, loitering around the schoolyard, this one engaging schoolboys in conversation, and trying to lure them to take a ride in his car.  And then there’s Walter’s chance meeting with young Robin in the park.

“Uncommon beauty is commonly overlooked.  Most people only notice the birds with the brightest colors.”

Everyone involved here is doing top notch work, particularly Hoover and his cast.  Adam Whisner seems to enjoy creeping me out.  He started the year unsettling me in Loudmouth Collective’s production of A Bright New Boise, and now here he is again, inhabiting a character I’m not sure I want to spend time with, and yet can’t help feeling compelled to keep watching.  It’s a great performance.  Also to be lauded is Lillie Horton as Robin.  The girl’s scenes with Walter are incredibly complex and layered, and Horton gives a performance to match the quality of the writing and the skill of the acting partner she has in Whisner, moment by moment.  Goblirsch, Kupiecki, Rodriguez, and Tallen all contribute their own strange surprises and awkward revelations to the mix, making it plain that no one’s perfect, and maybe all of us aren’t as immune to mistakes as we’d like to think we are.

“You know what the worst kind of trouble is?  It’s trouble you bring on the people you love most.”

Director Hoover has also gathered a design team that reinforces the complicated nature of the story. Matthew Vichlach’s sound design in particular is incredibly evocative and adds a lot to the exploration of the troubled psyche of the central character, backed up by Julia Carlis’ lighting design and Derek Lee Miller’s starkly black and white backdrops that also serve as a forum for some unnerving shadow play throughout the tale.  The smooth way this design enables Hoover and his cast to transition straight from one scene into the next without pause, sometimes even overlapping the end of one scene with the beginning of another, keeps the momentum of the story moving as it needs to, not allowing the audience a chance to disengage.  One last shout-out to Vichlach, the pre-show music is damn near perfect.  If you want to make me a little nervous, put on Bruce Springsteen’s “State Trooper” or The Who’s “Behind Blue Eyes” (“And if I swallow anything evil, put your fingers down my throat” is pretty much the theme song for this show in two lines.)

“Why did I take that chance?  What did I want to happen?”

But here’s where I start to part company, both with the script and the production.  I’d like to unequivocally endorse Theatre Pro Rata’s presentation of The Woodsman because in many ways I think it’s an amazing piece of writing and it’s delivered with the appropriate level of intensity and sensitivity.  The subject matter could easily be sensationalized and tip over into melodrama, but The Woodsman does the more difficult and interesting job of putting the audience in the position of having to make up its own mind about how they feel about the complicated questions it presents.  With one notable exception, the play never stacks the deck or tips its hand.

“[The Woodsman] cuts open the wolf’s stomach and one girl steps out alive.”

That exception is one of the tactics used to help humanize Walter and put his crimes in some kind of perspective.  Fechter’s play seems to be saying at numerous points along the way, “Sure, what Walter did was horrible, but there are worse things.”  What worse things, you ask?  Why, incest and gay pedophilia, of course.  I’m assuming this has to be unintentional, both on the part of the play and the production.  At least I hope it is.  But the play keeps stepping in it, so I feel like I can’t let it go unremarked.  In trying to explain his past crimes to Niiki, Walter says “I never hurt them.”  Well, yeah, Walter, you did.  You molested them.  Do you mean you were gentle, that you never violently raped them?  Well, what kind of rape is acceptable?  None.  Is an underage girl capable of giving consent, or, God forgive me for typing this, “wanting it?”  We hold adults to a higher standard.  That’s why you went to prison.  Yes, the play could just be showing us that Walter is lying to himself as well as others, but since no one calls Walter on his bullsh*t, the play leaves his assertions unchallenged and lets everyone, onstage and in the audience, off the hook just a little.

“You once did some bad things but inside you’re a good man.”

When Walter finds out someone is being molested by their father, it is repulsive to him.  Granted, this also helps Walter wake up to the severity of what he’s done and is tempted to do again.  But there’s just this slight veneer over the scene that seems to be saying, “Incest, how horrible.  I would never do such a thing to my own child or a child to whom I was related.”  No, Walter, you just do it to other people’s children.  That’s SO much better.

“No parole, no nothing.  Just steel bars and death.”

The cherry on top of this moral relativist ice cream sundae is Walter’s obsession with watching the guy watching the boys in the schoolyard across the street.  This (implied) gay man gives the the boys candy to help initiate contact, so Walter nicknames him Candy.  Not Candy-Man, mind you.  That gives the guy too much credit for masculinity.  Just Candy.  A nickname with feminine connotations, because why not throw misogyny on the pile while you’re at it.  Candy is a fit good-looking young man (you know the gays, they work out and take care of themselves and their appearance). As Walter narrates Candy’s stalking of his victims, a shadow play of life-size puppets plays out behind screens.  I don’t know if this is a suggestion of the script or an added choice of the production, so it’s hard to know who to blame here, but c’mon.  Candy is a dark, two-dimensional, slightly less than human silhouette.  So is his young target, but the audience is naturally drawn to sympathize with the boy and look upon Candy as the monster in this scenario.  In the play’s final moments we also find out that Candy is wanted for raping a boy in another jurisdiction.  Because, you know, anal sex is the worst thing ever.

“Will I ever be normal?”

I’m not saying that child molesters of all stripes aren’t monsters.  I’m just saying that the way to make Walter look not so bad is not to try and make other people look worse.  The play also, by having one straight child molester, one incestuous child molester, and one gay child molester is creating a false equivalency.  Gays have all been painted as child molesters as a public relations tactic in this country’s culture wars for years.  Statistics don’t bear this out.  The vast majority of child molesters, just like the vast majority of the population, are straight.  And the bulk of them aren’t also incestuous.  The inadvertent one to one to one correlation set up by the play, however accidental it might be, still isn’t doing anyone any favors.  It’s a sloppy, ham-handed move by a script that is otherwise quite deft in handling very tricky subject matter.  But the longer this scenario played out in the production, the more I found myself rolling my eyes and thinking, “Oh man, a bunch of straight people picked this play, didn’t they?  I bet it never occurred to them, or if it did, they felt it probably wasn’t so bad.”  Uh, it’s bad, guys.  It’s bad.

“So, how are you adjusting?”

That said, Theatre Pro Rata’s production of The Woodsman is a smart, skilled piece of theater.  I’m still recommending it highly.  Just like Walter, if you can forgive the play for its faults, you’ll come away understanding something a little better that you thought was beyond understanding.  That’s a pretty fair trade off for an evening of your time, and a lot more than many theaters will deliver.