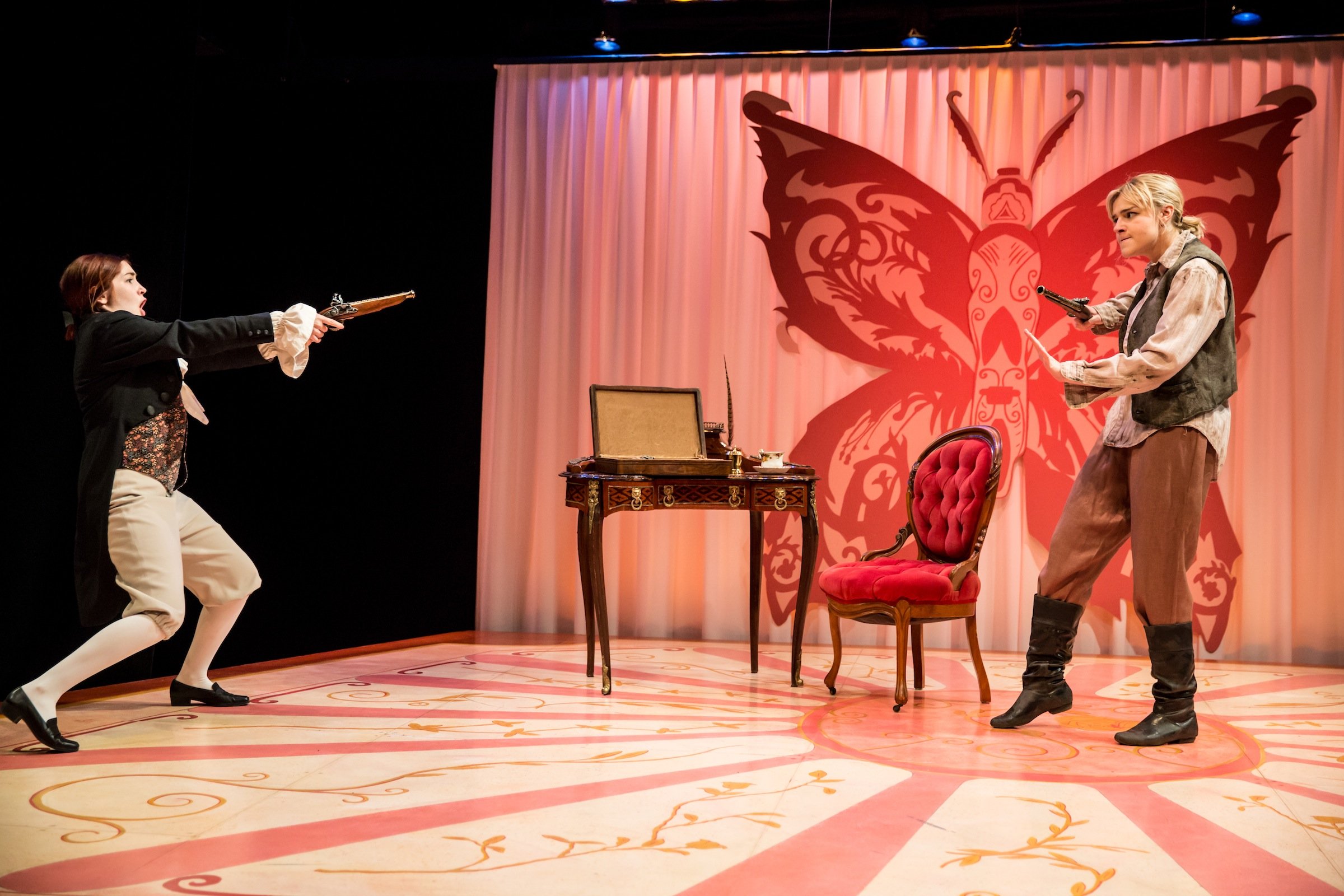 “We have a blood trough!” A member of the artistic team for Walking Shadow’s current production of The Coward was sharing with me after the show was over and they were quite giddy about it. A blood trough. They were so happy that I couldn’t help but be happy for them. After all, if there was ever a play that needed a blood trough at the bottom of its raked stage, it’d be The Coward.

“These things can be awful but they’re necessary. How else can we know who the best men are?”

Nick Jones’ dark comedy of manners explores men’s obsession with violence as a way of proving worth and honor by casting all the male roles with women. The sole female role is played by a man. The gender flip of the play’s conceit has the audience constantly thinking, “Well, that’s silly. Women are much more sensible about things. They wouldn’t do something this stupid.” By extension then, why do we give men a pass for being so stupid?  We even encourage them to be so, and think less of them if they aren’t. The Coward definitely screws with your head.

“Don’t worry. There are other publishers.”

It is 1790s England. Sort of. Lucidus Culling (Briana Patnode) is shamed by his father, Nathaniel Culling (Jean Wolff) into picking a fight with anything in pants. Just like his brothers. Who are both dead now. Dueling as a regular sport never ends well.  Lucidus bends himself into a pretzel in order to take offense at the way a feeble old man (Linda Sue Anderson) is looking at him. The man’s son, The Earl of Dorcester (Debra Berger) takes offense and challenges Lucidus to a duel. However, Lucidus has never fired a gun in his life and doesn’t even know how to load one properly.

“Then maybe my duels were less duels than manslaughter.”

Lucidus’ friends, Robert Blithe (Shelby Rose Richardson) and Gavin Klaff (Suzie Juul) encourage him to go looking for a more able street fighter to take his place in the duel. At the establishment of Egbert the bartender (Suzanne Victoria Cross), they enlist the services of Henry Blaine (Charlotte Calvert). Since the Earl’s never met Lucidus, Henry suggests they trade identities so Henry will literally fight as Lucidus Culling. Pretending to be his own second (right hand man in the duel), Lucidus has to listen to one too many insults to his dignity in a planning meeting with the well-meaning second to the Earl, Sir Derek Lanley (also Cross).  Lucidus ends up bristling, unable to take the easy way out and simply apologize. He insists on going through with the duel.

“Standing and shooting at each other while sober? It’s insanity!”

Everything, of course, goes horribly and hilariously wrong from there. Lucidus can’t seem to get sane advice from anyone, whether it be his father, his friends, the amiable but inscrutable family butler Friedmont (Anderson again) or the lovely Isabelle Dupree (Chase Burns), a woman a little too in love with violence and the men that perpetrate it. Guns are drawn, blood (and guts) are spilled, and the family name may never recover.

“If you were to be horribly disfigured I would love you just the same.  Maybe more.”

Director Amy Rummenie and her cast are having a ball doing this silly play. They delight in the blood and guts almost as much as they delight in the absurdity of the script. (And when you’ve got Tyler Olsen, the blood effects mastermind of RawRedMeat Productions and such Twin Cities Horror Festival favorites as Hear No Evil and Frankenstein, it’s hard not to get a little carried away with all that fun red muck.)

“You’ll find plenty of people to fight you dressed like that.”

I’m not entirely sure why The Coward left me cold.  It was certainly clever and enjoyable. Jones has written a smart comedy, Rummenie’s direction is sharp and the ensemble full of zest. The design is clean and precise whether you’re talking about set, costumes, sound, lights or all that blood.  It was a treat watching all these wonderful actresses have the run of the Red Eye stage. It’s possible that because the farce and absurdity of the script kept me at arm’s length, I was never really able to adequately feel for any of the characters involved. They were all in their own ways ridiculous, and our hero doesn’t come off looking any better than the bloodthirsty rest of them in the end.  Being able to watch and laugh and pass judgment on the whole pack of them feels like it’s letting me in the audience off too easily.  But it’s entirely possible I’m overthinking it.

“Oh Lucy, what a man you have become.”

The Coward is a well-written funny play, well done. That’s enough of a rarity, that I feel compelled to recommend it. If you’re not squeamish, you should have a very good time.