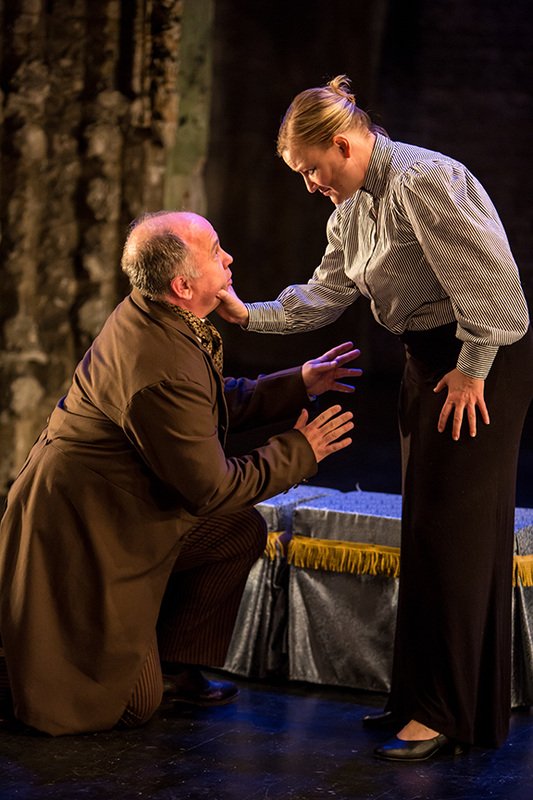 The bumbling Dr. Jekyll (Tim Uren) faces off with a transformed Mary (Amy Schweickhardt) in Ghoulish Delights' The Strange Case of Dr. Jekyll and Dr. Jekyll in the Twin Cities Horror Festival; photography by Dan Norman

Writer/director/actor and head of Ghoulish Delights Tim Uren has gotten so good at horror lately (for instance, his production in last year’s Twin Cities Horror Festival, Trust and Obey) that I often forget how funny he is. I was expecting a much darker take on the legend with The Strange Case of Dr. Jekyll and Dr. Jekyll in this year’s festival. Instead, I was delighted to find him going the lighter route, and yet still serving up a really meaty script full of big ideas—the good and bad in people, the uneven fortunes of men and women in society, whether it’s ever OK (or perhaps necessary) to take what you need from others. The context of these ideas is so awash in humor, however, that you’re often not even aware you’re thinking while you’re laughing (or laughing because you’re thinking). It’s not so much horrific as it is adorable (though I realize it’s a stretch to label a play adorable when one comedic scene revolves around an everyday conversation taking place while one character is giving the other a hand job in the middle of the street).

“What if constant longing is all we really are?”

Dr. Henry Jekyll (Uren) has concocted a formula to inhibit man’s baser instincts to allow him to be the best self he can be. His colleague Dr. Landon (Joshua English Scrimshaw) not only thinks it’s wrong and dangerous to submerge or wall off parts of a person’s true nature, he revels in the less than savory aspects of the human personality.

“You’re looking emotionally vulnerable tonight, Mary.  I like it.”

Trouble is, Jekyll had also developed a potion to help his maid Mary (Amy Schweickhardt) to clear her sinuses. Both potions look remarkably similar, and he neglected to label them. Consequently, Mary ends up taking the potion that instead of controlling her more aggressive side, liberates it so it (and Mary) can take control of her life.  Meanwhile, all Jekyll gets is some very clear sinuses. But this transformative feeling convinces him that he took the right potion with the wrong result. He’s sure his worst side has emerged instead (as if he were Mr. Hyde after all). He wanders the streets at night, valiantly struggling against his liberated sinuses.

“This other me accomplished more in one night than I did in a whole lifetime of wishing.”

Mary uses her newfound initiative to compel a series of learned professors, Landon included, to give her a crash course in everything they know. She strong-arms her way to a college education overnight. Landon, meanwhile, is surprised to find he really enjoys being dominated. Across town, the conflicted Jekyll meets a very proper and well dressed lady of the evening, Polly (Dawn Krosnowski, who quickly put me at ease even though I’d just seen her be full-on evil in The Surgeon the day before). Polly helps Jekyll (you’ll pardon the pun) relieve his urges with the aforementioned hand job, all the while carrying on a perfectly normal “getting to know you” type of conversation.

These four characters continue to cross one another’s paths over the course of the play, including one most amusing scene in which Mary and Polly turn a discussion quickly from men to issues of more importance, having a meta conversation about the representation of women in plays worthy of a nod to the Bechdel Test. (As you watch plays, movies and TV, keep it in mind—are there at least two female characters, who each have names, who share a scene where they talk to one another, about something other than a man? Still not as common as they should be, particularly given the fact that scripts that meet that, admittedly, very low threshhold are often much more satisfying entertainment—this play very much included). Well done, Mr. Uren, keep up the good work.

“It would take several hours and a riding crop to explain.”