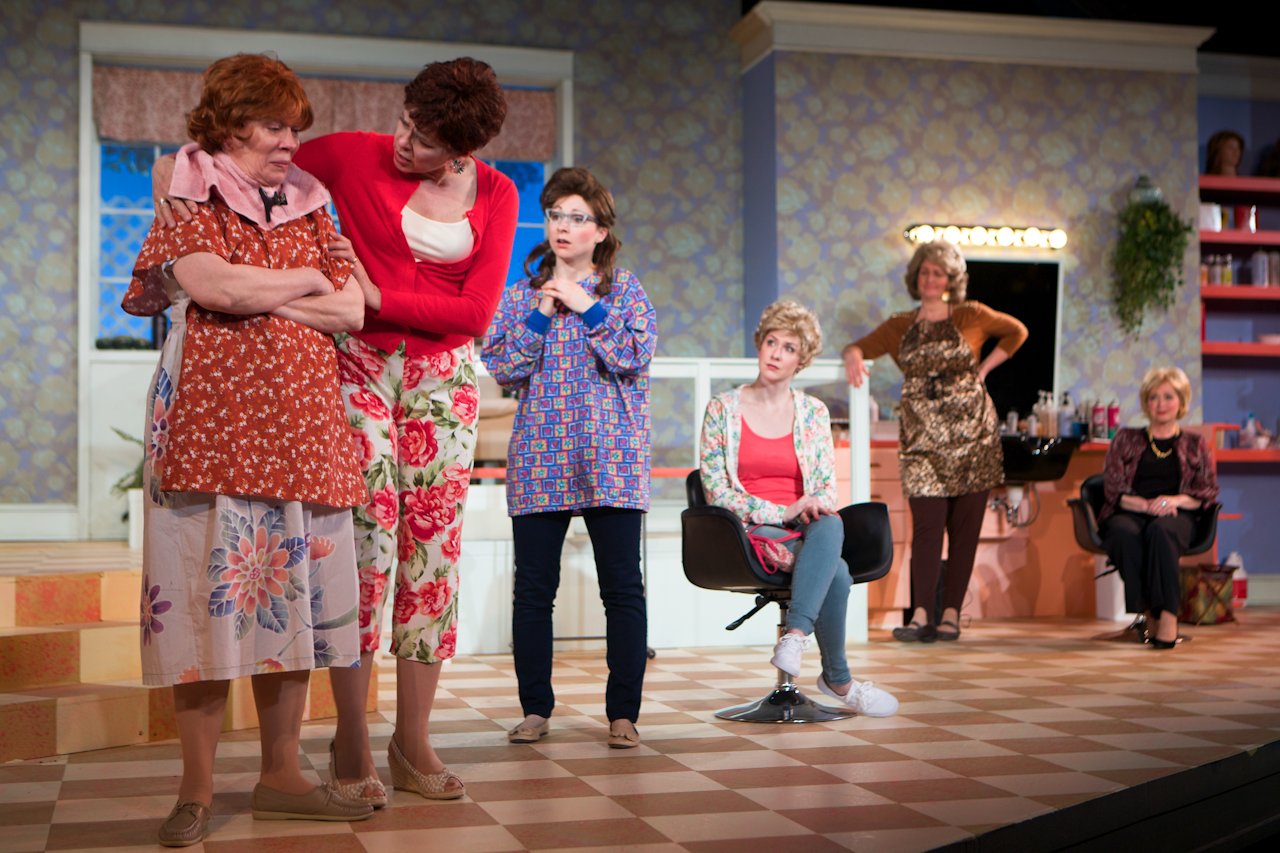 A private moment in Steel Magnolias. Photo courtesy of the Old Log Theater

Steel Magnolias is an extraordinary play about ordinary and sometimes terrible events that people live through. Seeing the Old Log Theater’s excellent new production will not make you want to go out and change the world, but it will make you laugh a great deal and might make you hug a loved one tightly when you get home. This is a play that resonates with audiences because of its veracity and encapsulation of real life and its rhythms – a drama that resonates with its down-to-earth authenticity and lands very close to home.

A lot happens during the course of the play, but this is a story best experienced as it unfolds, rather than through sneak peeks. The action is set in small-town Louisiana during the 1980s, features an ensemble cast of six women, and takes place entirely in or just outside a beauty shop. Naturally, this means that hair is cut, treated, and curled constantly; savvy audience members can look for clues about upcoming reveals and by spotting what else is going on amidst the trims and nail treatments. (The older matinee crowd also took a particular delight in pointing out the posters and recreations of hairstyles that they’d worn over the years.) This beauty shop functions as a sort of sacred space where women of very different classes, backgrounds, and personalities come together and bounce off each other. Almost anything can be said, not all of it wisely; secrets are unearthed, potshots taken, and the witty banter couched in a veneer of Southern civility had the audience rippling regularly with laughter.

The story is brought to life by six dynamic performances from the all-female cast – men appear only in phone calls and offstage events, usually causing problems. The beauty shop is managed by Greta Grosch (Truvy), better-known from the Church Basement Ladies musicals. It’s no surprise that the other characters speak so freely: Grosch’s portrayal embodies the judgment-free hairdresser you spill your whole life story and secrets to just moments after meeting. Her new assistant, played by Lisa Bark (Annelle), starts as something of a mystery fiture; Bark’s rendering of the character highlights her quirkiness and provides a pleasantly understated and hilarious counterpoint to the mainstage action.

The rest of the characters comprise the hair salon’s long-time clients of various sorts and statures. The evolving chemistry between Jody Briskey and Heidi Fellner as mother and daughter (M’Lynn and Shelby, respectively) is particularly striking and layered, and Fellner’s portrayal of a diabetic fit is disturbingly – even painfully – realistic. The sparring and one-ups(wo)manship between Michelle Myers Berg (Clairee) and Shelli Place (Ouiser) as the town’s rival socialites are also something marvelous to behold. There are no heroes in Steel Magnolias and no true villains, which is not at all the same thing as everyone getting along perfectly. The skirmishes are verbal, sometimes barbed and sometimes simply witty; rimshots, sniping, and humorous grousing abound.

Where some of the characters end up might surprise you, but the seeds are sown throughout the play and the acting is excellent throughout. This production is touching, witty, hilarious, and emotionally loaded in the best ways.