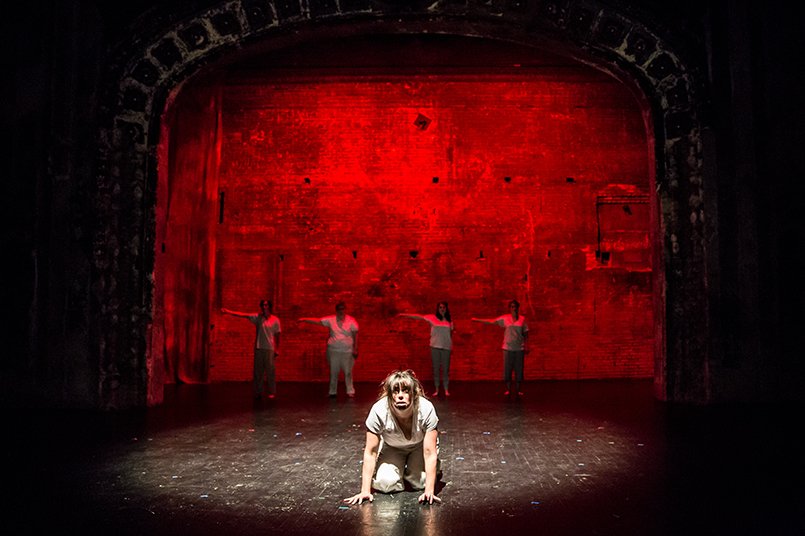 Since the folks at Transatlantic Love Affair, and their ensemble-created works, are by and large optimistic affairs, which might travel to dark places but always emerge on the other side with hope, I was curious how they would bring their own particular brand of theater into a setting like the Twin Cities Horror Festival. Turns out, very easily. In Solitaire, they just go to the dark place and stay there. Yikes.

“Pain is to be expected.”

Director Diogo Lopes has gathered an all-female ensemble this time, for reasons which become apparent by play’s end. The one exception is Transatlantic’s ever-present element of musical accompaniment, here provided by composer/performer Alex Hathaway, seated off to the side of the performing area but dressed as everyone else in the cast is, barefoot in khakis and a white V-neck T-shirt. The music, fitted perfectly to the performance, is less melodious and more about plucking discordant and strange sounds out of an acoustic guitar, with a disturbing detour in sounds created by a simple bowl of water.

“There was a time I had handfuls of hair.”

The action focuses largely on a disheveled Isabel Nelson, though she is soon joined by a mysterious chorus of four other women (Amber Bjork, Heather Bunch, Adelin Phelps, and Allison Witham) who echo her physical and emotional state in ways that aren’t fully clear until the big reveal at the end of the play. Though it isn’t an easy play to sit through, for good reason, knowing what I know now about the characters of Solitaire, I’d be very curious to go back and see it again, watching as all the clues are dropped in front of me, seeing the moves for what they really are. Solitaire is an exercise for an audience in trying to decode who these women are to one another, what situation brought them to this place of isolation, and whether there’s any prayer of them coming out on the other side.

Solitaire mostly takes place in near silence as Nelson and her chorus of shadows go through the routine of their day, and reconstruct the pieces of what appears to be a traumatic memory. The song they sing feels less like a relief than a warning. If you’re in the audience thinking to yourself, as I did, “part of me wants them to speak, but I’m a little afraid of what they might say when they do,” that’s the right instinct. The story, when revealed, is just as horrible as the build-up to it suggests. Here, too, though, it’s not a monologue or scene that lays everything out neatly for you. It’s the disjointed ramblings of a young woman who doesn’t fully understand what she’s done, or the consequences of those actions. She, like us, is just piecing together what got her here.  Good luck trying to figure out how to get out of it.

“Oh mother, what have I done?”

Solitaire proves that a silent scream can often be more unsettling than a scream at the top of one’s lungs. It also proves that sometimes not a drop of blood needs to be spilled onstage in order to chill our blood in the audience. But, man, what I wouldn’t give for a happy ending right about now.